Private companies and not-for-profit businesses play a prominent role in the West Australian economy, with annual revenue at the top 20 exceeding $32 billion, according to data compiled by Business News. 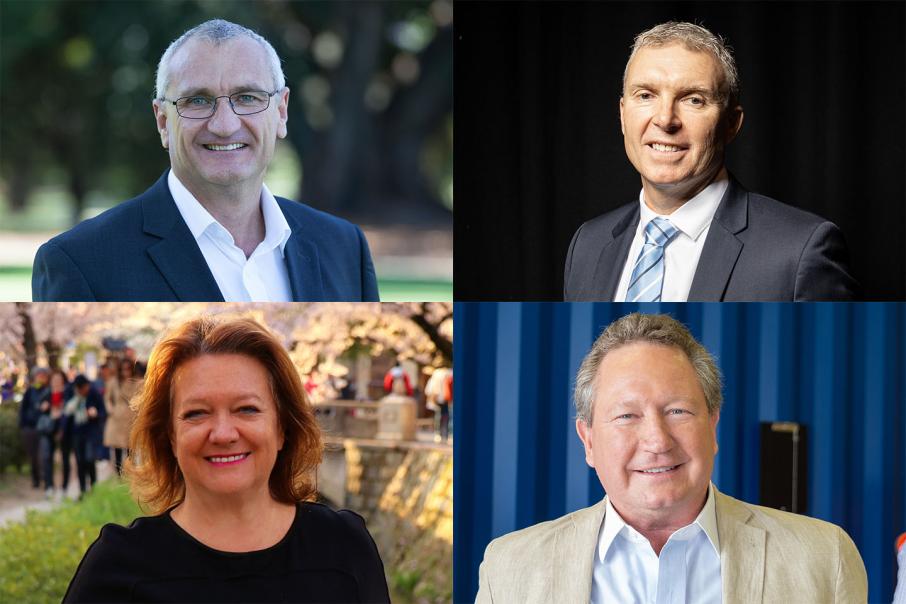 Data compiled by Business News has highlighted the prominence of private companies and not-for-profit businesses.

If growth in revenue is any guide, Western Australia’s major private companies and not-for-profit businesses would be the envy of their listed peers.

Of the state’s 15 largest private companies, led by Gina Rinehart’s Hancock Prospecting, 12 achieved growth in revenue in the past financial year, according to the BNiQ database.

It was the same story for not-for-profit businesses, led by the likes of farmer cooperative CBH Group and St John of God Health Care.

The BNiQ database, which has details on nearly 200 private companies and not for profits, also reveals the scale of these sectors.

The state’s 10 largest private companies had combined revenue of $22.1 billion in the past year.

The top 10 not-for-profit businesses had revenue of $10.2 billion.

By comparison, the state’s largest public companies had combined revenue of $41.9 billion. 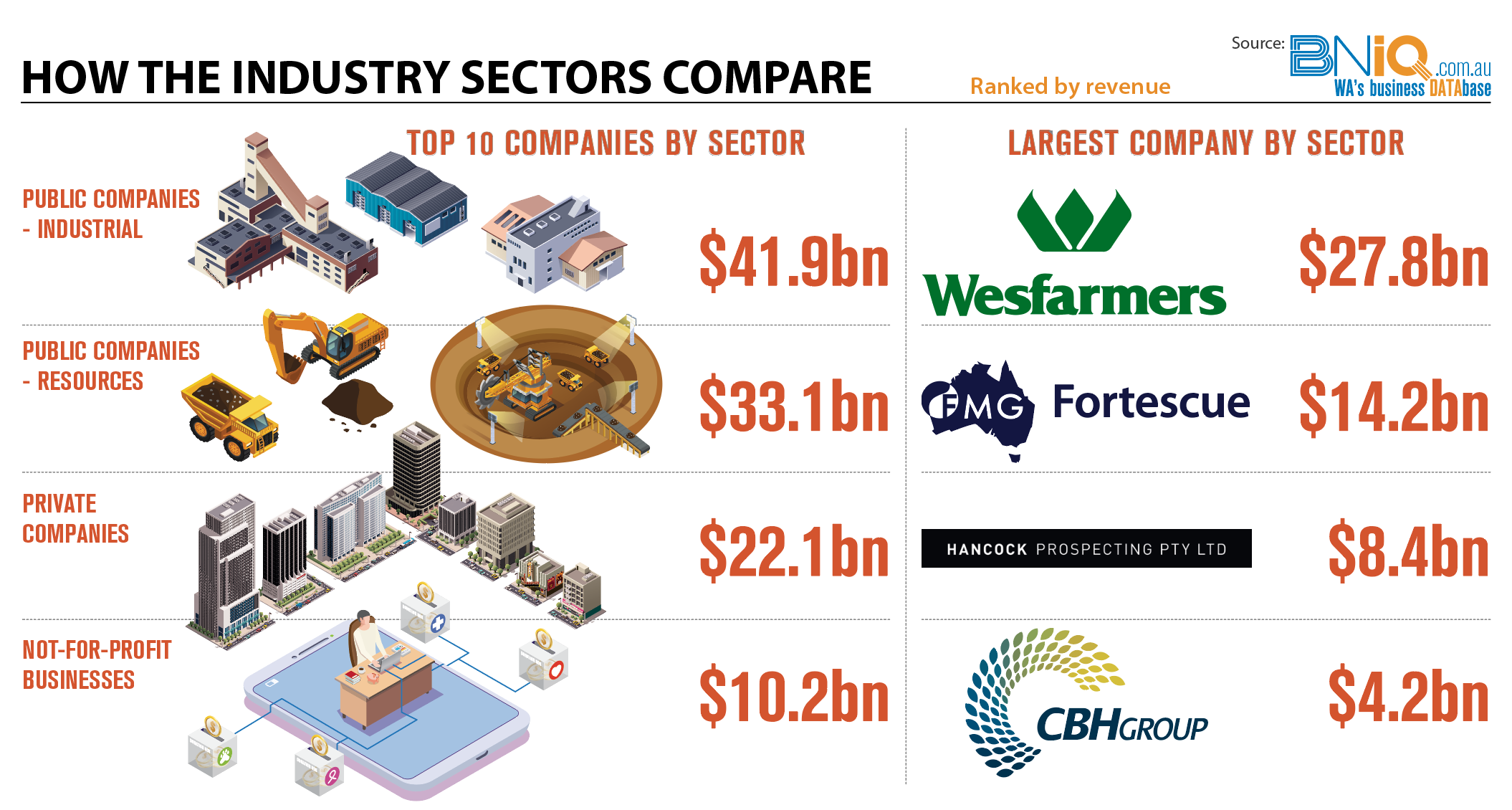 While that figure was substantially higher, it was greatly boosted by retail and industrial conglomerate Wesfarmers, with annual revenue of $27.8 billion.

In the resources sector, the state’s 10 largest public companies had total revenue of $33.1 billion.

The biggest contributor to this total was the Andrew Forrest-chaired Fortescue Metals Group, with total income last year $14.2 billion.

It is notable that Hancock Prospecting and Fortescue top their respective lists.

Both companies are relatively new entrants to the iron ore sector and their rapid emergence plays to the rivalry of their super-rich owners.

The biggest contributor was Roy Hill Holdings, which is 70 per cent owned by Hancock.

Roy Hill more than doubled its net profit to $1.37 billion after increasing its sales revenue to $5.15 billion.

It lifted production from its Pilbara iron ore mine to 55 million tonnes last year and is looking to lift output to 60mtpa.

Beyond iron ore, Hancock is one of Australia’s largest farm businesses, with a national network of pastoral stations.

Mr Forrest has a similar portfolio of assets, focused on iron ore and pastoral stations.

He owns one-third of Fortescue, which has a much larger mining operation than Hancock.

This estimate includes dividends declared by Fortescue during the financial year of $1.14 per share.

Combined, this delivers a total dividend income of $1.24 billion.

In addition, Minderoo controls agribusiness Harvest Road Group, which had FY18 revenue of $303 million, according to its latest returns to the Australian Securities and Investments Commission.

The Buckeridge family’s BGC Australia is ranked third on the BNiQ list with revenue of $1.97 billion.

Like Harvest Road, this is based on FY18 data, the most recent available through ASIC.

BGC Contracting was expected to generate about $850 million in revenue in FY20.

After the contracting sale, it is likely that BGC, led by chief executive Daniel Cooper, will stay ahead of building industry rival ABN Group, which posted revenue of $952 million in FY19.

A new entrant to the private companies list is education services firm Navitas.

It was bought last year for $2.3 billion by a consortium of investors led by private equity group BGH Capital and company founder Rod Jones, who became frustrated with Navitas being an ASX-listed entity.

The BNiQ data shows there is often a wide difference between revenue and profits, depending on the circumstances of each company and the industry in which they operate.

Perron Group is one of the state’s most profitable companies despite being much smaller than many others.

With annual revenue of $605 million, it is ranked as WA’s 10th largest private company.

Yet only Hancock Prospecting and Roy Hill Holdings eclipsed its profit of $275 million.

Perron owns a diverse portfolio of blue-chip property assets, including shopping centres and CBD office towers, and retains the rights to distribute Toyota motor vehicles in WA, indicating its consistently high profits are likely to continue.

Another company generating attractive returns is Perth Airport, which is owned by a group of superannuation funds and institutional investors.

It delivered a net profit last year of $102 million on revenue of $497 million.

Not-for-profit businesses, as their name implies, are not focused on maximising annual profits but they do seek to generate a surplus, to ensure the sustainability of their business.

ASX-listed Ramsay Health Care, which has a global business but is also a major competitor in the WA market, has a very different set of ratios.

It is about six times larger than St John of God, with revenue of $11.5 billion, yet its profit is about 30 times larger, at $590 million.

CBH Group, by contrast, incurred a loss of $29.7 million in the year to September 2019, the worst single-year financial result in the cooperative’s history.

The good news for the cooperative’s members is that CBH has built a strong balance sheet.

“While the loss is disappointing, it should not overshadow the strong financial position of the co-operative which has a robust balance sheet that has been strengthened over many years with $1.8 billion in net assets and little long-term debt,” Mr Wilson said.