The best leaders encourage us all to step up to the plate, empowering us to achieving better outcomes. 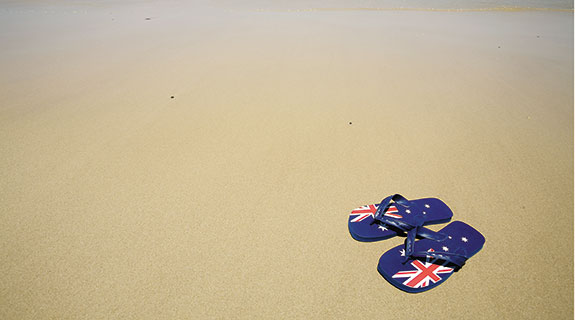 AUSSIE: Leadership plays an important role in how we see our national identity. Photo: iStockphoto/davidf

The best leaders encourage us all to step up to the plate, empowering us to achieving better outcomes.

The arrival of Australia Day always turns my thoughts to our complex identity and the leaders we choose to celebrate on our national holiday.

We lack the cultural confidence of our American friends or the deep history of Europe and Asia, at least those of Anglo-Celtic descent among us do.

And somehow, I don’t feel like we’ve ever found a way to incorporate an indigenous narrative into the celebrations.

And so we resort to fireworks, beer, barbecues and the honours list – an annual role call of the best and brightest, the brave and sometimes brazen.

We love a leader who challenges the status quo in Australia, particularly if they’re also successful, such as Andrew Forrest.

Challenging the accepted thinking is such a big part of leadership, and it’s arguably never been more important as Australia feels its way through this post-boom hangover.

It’s also important to remember that business and sport do not have a monopoly on leadership, as last year’s Australian of the year, Rosie Batty, so powerfully demonstrated.

Leadership is demonstrated at many levels across the breadth of our nation, however, with my son’s school principal of recent years one of the most impressive leaders I’ve met.

A lanky, middle-aged man, who quietly fancied himself on the basketball court, he led a big state primary school with the quiet assurance of a natural chief. He learned every child’s name, but his leadership was more than just gestural.

He walked the school grounds every morning as children arrived, chatting with the kids and making himself available to parents as they walked younger students to their classrooms.

He was a powerful presence and I suspect his morning walks were an effective way to keep his ear to the ground and identify issues before they flared into conflict.

More importantly, he empowered his teachers to make the best decisions for their students. This was a man who understood the power of delegation.

He backed their judgment and their capacity to use their discretion in the application of regulations.

This was a principal who valued structure and performance, but he wasn’t a slave to the rulebook.

I was excited to be joining a new community and getting to know a new teaching cohort.

The contrast couldn’t have been starker, and it illustrated how powerfully leaders influence the culture of an organisation, even when they’re largely invisible.

At our new school there were rumblings about the role of the long-standing principal almost from day one.

But what struck me most powerfully was her complete absence from the school. In my first six months, I never saw her on the grounds at pick up or drop off.

It’s not surprising, given how many school activities she oversaw.

Every decision from hiring to school maintenance, fund-raising to school lunches was controlled by the principal.

It was her way or the highway, and many teachers were choosing the open road. This experienced educator demanded that all correspondence with all teachers at this 800-pupil school go through her office.

Control was the central motif of this woman’s command and the teachers loathed it.

Within weeks there was an acting principal in the role. I only know this because she stopped to talk to my younger children one afternoon and explain why it was safer for them to walk on school grounds rather than zip along on their scooters.

These two principals, who both probably put in very long hours and were deeply committed to teaching, illustrate the difference between leadership and control.

The discipline and control required in opposition doesn’t translate well into office.

Both Kevin Rudd and Tony Abbott demanded all public statements from ministers get the tick off from the prime minister’s office – to ensure they stayed on message, played by the rules.

The best bosses I’ve worked for and there are several, believed in me and trusted that I would act ethically – one of the most important rules for reporters.

I hope the 2016 Australian of the year, former Army chief David Morrison, builds on Rosie Batty’s extraordinary performance and challenges our thinking anew.