SPECIAL REPORT: The detailed reporting of remuneration by listed companies means it should be easy to determine the state’s best-paid chief executive, but the reality is more complicated. 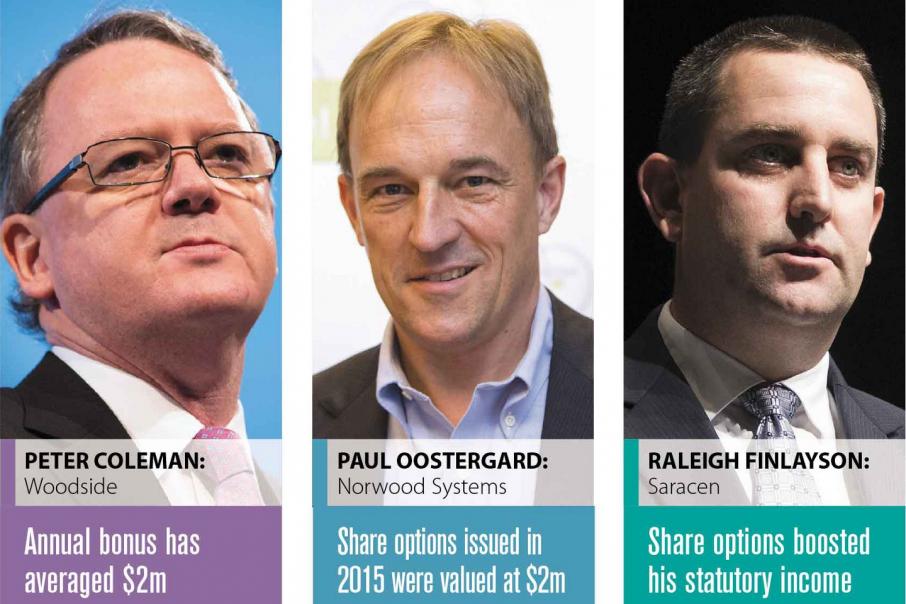 SPECIAL REPORT: The detailed reporting of remuneration by listed companies means it should be easy to determine the state’s best-paid chief executive, but the reality is more complicated.

Depending on which measure you prefer, either Woodside Petroleum’s Peter Coleman or Fortescue Metals Group’s Nev Power was the highest-paid chief executive in Western Australia during the past financial year.

Based on the statutory remuneration report listed companies must publish each year, Mr Coleman topped the ranking with total income of $7.5 million.

On this measure, Mr Power was ranked number four with a statutory income of $5.3 million, behind South32’s Graham Kerr and Wesfarmers’ Richard Goyder.

However, the outcome is different when based on actual (or take-home) remuneration, which comprises cash income actually paid and the value of shares at the time they were awarded.

Not all companies calculate actual remuneration, but Fortescue’s 2016 annual report has disclosed that Mr Power earned $8.5 million on this basis.

Mr Power’s statutory and actual remuneration both include base salary payments of about $2 million, an annual bonus of $1.3 million and a one-off incentive of $2 million that was paid as a special reward for his achievements during the year.

Under the arcane valuation and accounting standards that govern statutory reporting, Mr Power was paid $1.2 million worth of shares under the executive incentive plan; but in the same year the value of his shares in the company’s long-term incentive plan reduced by $1.1 million.

By contrast, his actual remuneration included $3.1 million of shares awarded during the year.

Mr Coleman and Mr Power are among 2,560 WA executives whose remuneration details are available to subscribers through the BNiQ Search Engine on the Business News website.

The 2016 remuneration survey shows a trend toward lower incomes, with companies continuing to trim base pay and most paying little, if anything, in the way of bonuses.

It shows there were 78 WA executives and directors with total incomes in excess of $1 million.

That number has declined steadily each year since peaking at 118 in the 2011 survey.

This year’s survey includes 10 people with a base salary of $1 million or more.

That number has dipped slightly from last year, in part because the global mining companies have effectively downgraded their Perth offices.

As a result, Jimmy Wilson (ex-BHP Billiton) and Andrew Harding (ex-Rio Tinto) are no longer featured.

Their departure from the local corporate scene has been offset by the likes of South32’s Mr Kerr and Sandfire Resources boss Karl Simich, who are both paid base salaries in excess of $1 million.

Perhaps more surprisingly, given the tough commercial environment and the continued focus on cost cutting, this year’s survey includes eight executives who were paid an annual cash bonus of $1 million or more.

This reflects the way remuneration packages have been structured for chief executives at big companies such as Wesfarmers, Woodside, Iluka Resources, South32 and Automotive Holdings Group.

Typically they qualify for a short-term incentive that is equal to their base salary, simply by hitting their agreed performance targets.

If they hit ‘stretch’ targets, the incentive payments are even larger.

Hence, the term ‘annual bonus’ is a misnomer.

Chief executives such as Richard Goyder and Peter Coleman need to do something badly wrong to not qualify for an annual incentive payment.

Mr Coleman, for instance, who has a base salary of about $1.8 million, has been paid annual incentives averaging $1.97 million over the past five years.

That’s over a period when Woodside has delivered modest returns to shareholders, with its earnings dented by the low oil price.

Mr Howson’s base pay is $1.23 million per annum, and he has been paid an average bonus of $1.19 million over the past five years.

That’s not counting the value of long-term equity incentives, which lifted Mr Howson’s total income this year to $3.2 million.

His successor, John McConnell, is set to earn similar amounts.

Mr Goyder has traditionally been the state’s highest-paid executive, helped by his very large base salary of $3.3 million.

He slipped in the rankings this year because the weak performance of Wesfarmers’ coal mining and Target businesses dented the company’s profits, and therefore his annual incentive payment.

Mr Goyder qualified for just 25 per cent of his potential short-term incentive – which in practice was still $1.05 million in cash.

The 72 executives and directors in the million-dollar club include quite a few whose total remuneration largely reflects the value of share options and other equity incentives awarded during the year.

Some of these make sense. Ken Brinsden, Neil Biddle and John Young have benefited from the lithium miner Pilbara Minerals’ surging share price over the course of the year.

His share options were valued at $2.3 million, lifting his total income to $3.2 million.

Others are more surprising, such as Paul Ostergaard at Norwood Systems, Bert Mondello at Ziptel and Luke Taylor at Tech Mpire.

Each of these executives holds equity incentives that had been valued at more than $1 million, but the weak share price and modest valuations of their tech companies means they are unlikely to be worth that much today.

It’s a similar story for the directors at recently listed livestock exporter Wellard.

BHP Billiton spin-off South32 has been a poor performer for shareholders after being hit by weak commodity prices, but it has delivered good returns for its senior executives.

Mr Kerr had a total income of $7.3 million, helped by a $1 million annual bonus and equity incentives worth $4.5 million.

The remuneration levels at South32 have drawn the ire of the Australian Shareholders’ Association.

The ASA has criticised the remuneration practices at several WA companies this year, including Automotive Holdings Group, Independence Group and Mineral Resources, but has saved its strongest criticism for South32.

“We voted against the remuneration report last year and will continue to do so whilst our concerns in relation to the level of overall remuneration remain unaddressed,” the ASA said in a statement.

“Perhaps significant profits would see our concerns diminish as relativity with shareholder rewards would be better, but at present we remain unconvinced that management and shareholder interests are aligned.”

The ASA described its executive remuneration arrangements as very generous, with short-term incentives permitted to be 1.8 times base pay, while long-term incentives can at stretch be three times pay.

The ASA believes incentives in aggregate should not exceed two-times base pay.