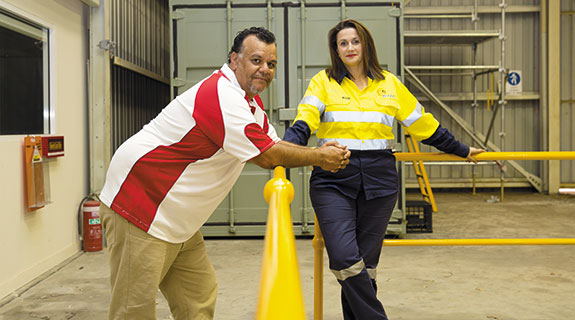 For more on our Indigenous Business feature, see the Special Report.

Also, see our BNiQ list of Indigenous Contractors in WA.

The current state of the resources sector makes it a tough time to start a new contracting business, but the slowdown in mining construction activity has not deterred one of the state’s major native title holders from doing just that.

Despite this rich endowment, Wintawari Guruma had, until last year, never had its own contracting or commercial arm to generate jobs or income for its people.

“The community understandably became frustrated seeing other companies and individuals benefiting and developing capability from activities occurring on their traditional land,” Wintawari Guruma said in a statement.

“Our goal is to generate returns that will flow back to the community.”

Tom Price-based Gumala Enterprises is also seeking to obtain a competitive advantage: “By demonstrating our track record of being a 100 per cent-owned indigenous organisation that shares business generated benefits with traditional owners.”

Its new strategy followed a restructure under which Gumala Enterprises became much more closely linked with its parent company, Gumala Aboriginal Corporation.

Writing in last year’s annual report, chairman John Lillywhite said a testament to the closer working relationship was that, for the first time, the board of Gumala Enterprises approved a cash distribution to Gumala Aboriginal Corporation.

The new alignment had also led to new criteria for commercial joint ventures, which now require a commitment to actively work with both Gumala Enterprises and Gumala Aboriginal Corporation to empower the traditional owner membership.

These changes at two of the state’s major Aboriginal organisations come at a time when the easy money in the Pilbara has rapidly dried up.

Not only are there fewer contracting opportunities, the income from iron ore royalties has also shrunk in line with the fall in iron ore prices.

Many indigenous businesses – which in most cases, means a business owned by Aboriginal families rather than traditional owner groups – have responded by forming joint ventures with larger contractors. The new business also has support from NANA Australia, the local arm of the Alaskan native title corporation.

There has also been a concerted effort by indigenous contractors to diversify.

Eastern Guruma, which has worked on more than $1 billion of projects over the past decade, usually in joint ventures with contractors such as NRW Holdings and Brierty, has started supplying bottled juice to mine camps and is looking to establish links with other food suppliers.

Perth-based Indigenous Construction Resource Group reflects many of the political and commercial pressures affecting the sector.

ICRG was established in 2010 with backing from John Poynton’s investment bank Azure Capital.

It has had a significant impact since then, winning more than a dozen contracts in its own right or through the four joint ventures it has with indigenous organisations.

Chairman Clinton Wolf said the success only came after a big investment and a lot of hard work, with the business taking 18 months to win its first contract.

Despite its progress, Mr Wolf said his current focus was ensuring ICRG was financially secure and able to deal with the tougher market conditions.

“This whole industry is facing a massive challenge,” he said.

“There will be some shrinkage.”

Mr Wolf is also in the midst of negotiating ownership changes driven by clients who want to deal with businesses that have majority indigenous ownership.

He told Business News that new investors were planning to buy shares in ICRG, to lift Aboriginal ownership from 25 per cent to 51 per cent.

A similar process is under way at Darwin-based Aboriginal Maritime, which has also been backed by Azure.

Mr Wolf said some of the existing shareholders in Aboriginal Maritime would lift their stake, in order to boost Aboriginal ownership from 28 per cent to 51 per cent.

The big iron ore miners have driven many opportunities for indigenous businesses over the past decade, as they have made a concerted effort to spread the benefits of the Pilbara mining boom. However they will offer much less in future as they cut spending.

Fortescue Metals Group chief executive Nev Power believes the diversity of contracts it has awarded will be beneficial.

FMG has awarded around 200 contacts to Aboriginal businesses and joint ventures, worth $1.75 billion.

“We’re particularly proud of that because we’ve only been around for about 10 years,” Mr Power said.

The miner also employs 1,200 Aboriginal people, either directly or through its major contractors.

Its largest contract, worth $500 million over five years, was awarded to Morris Corporation, which established six Aboriginal joint ventures to run mine site camps. Mr Power said these contracts would deliver continuity and a wide range of opportunities for people with varied skills and experience.

“It’s really important to develop sustainable businesses, where the businesses are upskilling,” he said.

The level of Aboriginal involvement varies widely. The Morris Corp contracts, for instance, have a target of 20 per cent Aboriginal employment.

MIB Group, which is the business arm of the Martidja Banyjima traditional owner group, has used FMG contracts to further diversify its business.

It has been active in a range of service areas, including labour hire, waste management, heritage surveys and training, in joint venture with Carey Mining.

BYAC Contracting and Carey Mining are rarities in the indigenous business sector in WA – they have been operating for 20 years, much longer than most of their peers.

Both companies have experienced tough challenges, just like any contractor exposed to mining commodity cycles.

BYAC has been anchored by a waste management and labour supply agreement at Glencore’s Murrin Murrin nickel mine, where it has been working continuously since 1996.

General manager Candy Spalding has led a restructure of BYAC, which is seeking to expand its labour hire and training operations and break into the oil and gas sector.

Ms Spalding has experienced first hand the problems that can arise when employers don’t understand the challenges inherent in employing Aboriginal trainees.

Last year, a Perth building company had planned to take on 40 BYAC trainees but backed out after a change of management.

“We say right up front, we need a strong commitment from the very top, and that has to continue right through so that we don’t face that kind of situation again,” Ms Spalding said.

“It needs companies to make a true commitment, to understand the struggles that the young indigenous guys face.”

Ms Spalding said BYAC was 100 per cent indigenous owned and not for profit.

Any surplus goes into the Aboriginal community around Laverton, where its parent company owns 14 houses and runs a short-stay hostel in partnership with Red Cross.

“There are clients that can see what’s going on, they are looking for genuine indigenous organisations,” she said.

“I reckon that’s going to be our saving grace.”

Chief executive Quinton Tucker said some contractors didn’t ‘get it’.

“They will say they’ve got jobs, they’ll give you ‘bums on seats’ and numbers, just to win a tender,” Mr Tucker told Business News.

“We’re concerned about community, giving people jobs to make them self-reliant and stop the cycle.”

In particular, this is a point of difference between Wintawari Guruma and (competing) contractor Eastern Guruma, which is owned by members of the Eastern Guruma traditional owner group.

“Our focus is different to a private company,” Mr Bevan said.

“We’re not trying to make profits for shareholders, we’re a not for profit and the benefits go to the community.

“They are just like any other Pilbara Aboriginal business.

“It’s not like it’s a two-horse race, there are a lot of competitors in the market.”

For its part, Eastern Guruma has expanded its links with Wirlu-Murra Yindjabarndi Contracting, which respresents a neighbouring traditional owner group.

After securing a maintenance contract in 2013 for 60km of access roads and service areas with the Solomon Mine, Fortescue has extended the contract with the Eastern Guruma Wirlu-Murra Yindjibarndi JV to include resource development earthworks for drill pads and exploration access.

The JV employs more than 40 per cent Aboriginal workers including Eastern Guruma and Yindjibarndi people, as well as other Aboriginal people from throughout WA.

Eastern Guruma is currently working towards having all employees trained in Certificate 2 or 3 in Surface Extraction Operations.

Established in 1998 by managing director Geoffrey Stocker and co-director Andrew Ellison, it has been one of the largest indigenous contractors over the past decade.

A restructure of the business means its main operational focus is the PTES joint venture with waste management company Toxfree Solutions.

There are many other contractors looking to expand, including Marniyarra Mining & Civil.

Perth-based Alliance Contracting, which has been active in the Pilbara for many years, established Marniyarra with Karratha-based Hicks Civil & Mining.

“We had been wanting an indigenous partner to help us deliver on our clients’ community objectives,” Alliance director Mark Breingan said.

“It was Peter (Hicks) that approached Alliance, he knew us because we’d worked together in previous companies.” Mr Breingan said.

Hicks Civil’s Peter Hicks said that linking with Alliance would enable him to bid for bigger contracts. The two businesses evaluated several ways of coming together, including a joint venture or MOU, but finally decided to establish a new company.

“It’s an entity that stands on its own,” Mr Breingan said.

“Joint ventures are normally set up for short-term projects; this is for the long term.

“It’s less complex, it has its own business plan, it operates as an entity, it has a board, and its own budget and vision.”

Alliance will continue operating across most of WA, but will leave the Pilbara to Marniyarra, which was officially registered only 14 months ago.

The new company turned over $7 million in its first year and achieved 15 to 20 per cent indigenous employment.

Karlayura Construction Services is pursuing similar goals, but instead through a joint venture arrangement.

Perth-based contractor Brierty has a strong engagement with the indigenous sector, evidenced by the fact 14.8 per cent of its workers are indigenous.

It will help Karlayura develop its capability, including providing safety and environmental systems, a dedicated trainer, and allowing Karlayura to operate under its prequalification levels.

Brierty holds a 70 per cent interest in the joint venture but that will reduce to 50 per cent as Karlayura contributes more people and equipment.

Another notable change in the market was the merger last year of Fred Taylor's Yamatji Mining & Civil and the Clarke family's EMJC business.

The merger blends Yamatji's access to a pool of indigenous labour and considerable experience in contracting with EMJC's equipment fleet.

Editor's Note: This article contains additional content not in the print edition of Business News. 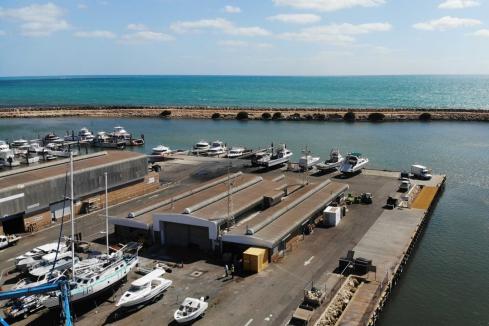