Borrowing off the books may minimise the damage to official state debt but the money has to come from somewhere – taxpayers. 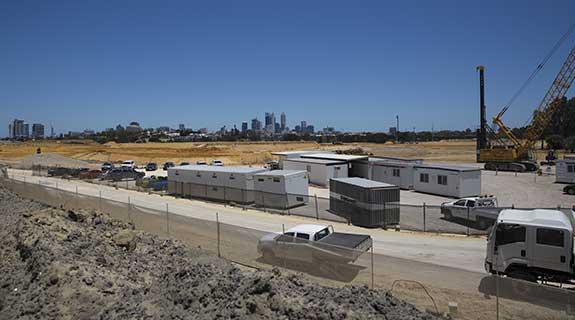 WORK IN PROGRESS: The stadium is expected to cost in the vicinity of $860 million. Photo: Attila Csaszar

Borrowing off the books may minimise the damage to official state debt but the money has to come from somewhere – taxpayers.

‘MAN is not what he thinks he is, he is what he hides’ ranks among the most memorable quotes from French author, WWII resistance fighter and post-war information minister, André Malraux.

It’s a statement that certainly resonates when applied to politics, since politicians so often opt to be secretive.

Earlier this month, this column highlighted the concerns of former CPA national president, Ken Eastwood, over the size of the state’s mounting state debt, which is now on the way to topping $30 billion by 2018.

But is that the end of the line? Could debt rise even further?

Mr Eastwood certainly hinted at this when focusing on one of Premier Colin Barnett’s favourite big-ticket items – the $862 million Perth Stadium.

“So far there’s been no mention of the additional surrounding infrastructure such as roads, rail services and parking, yet the premier says the stadium came in at $40 million under budget,” Mr Eastwood said.

“This is to be financed to the extent of 60 per cent of the cost ($517 million) from the budget, over four years, so from taxpayers’ pockets over the four-year construction phase, adding $129 million to the budget’s bottom line until April 2018, the likely date of completion.

“But at what rate of interest?

“Who knows since this loan is provided by the contracted builders, Brookfield Multiplex-led consortium (Westadium).”

In other words there’s well over $300 million in the pipeline that may not be accounted for in the state debt equation, since it’s part of a side deal, borrowings from or via a construction consortium.

Which leads to the next obvious questions: are there any other similar ‘side deals’ that may not be on the state debt’s books that will be requiring repayment by WA taxpayers over the 25 years?

Initial inquiries into the stadium’s $300 million-plus credit line led Labor’s Treasury spokesman, Ben Wyatt, to put an 18-part question to Sports and Recreation Minister, Terry Waldron, about the bankrolling of the stadium.

Question (a): “What internal rate of return does Westadium anticipate it will receive from this project?

Answer: “The internal rate of return is classified as commercial in confidence information in the contract between the State and Westadium.”

Question (b): “What is the discount rate used to calculate the net present cost of the project to the state?”

Answer: “The discount rate is critical to the bid evaluation is strictly confidential.”

Question (k): “What are the annual payments that the state government will be making to Westadium over the 25 years from the completion of the new stadium?”

Answer: “The annual payments to be made to Westadium over the 25 years are commercial in confidence.”

So, here’s an extremely costly structure (hardly essential to WA’s future wellbeing) that will carry a debt exceeding a third of a billion dollars over 25 years with the financial nuts and bolts hidden from taxpayers.

After Mr Eastwood had a look over the 18 answers he said: “Seems to me that the government is hiding the true amount of state debt by borrowing from private contractors ($345 million) instead of the borrowing being added to the state deficit.”

Which raises the inevitable question – do WA’s finances have any more similar hidden big-ticket items?

Put differently, is state debt likely to exceed the $30 billion-plus we’re headed for by 2018?

I put that question to a contact familiar with those finances who said he believed the $30 billion was likely to be accompanied by up to $6 billion more arising from arrangements akin to the confidential Westadium arrangement.

If that’s so, and I’ve no reason to doubt that contention, isn’t it time the taxpaying public was brought fully up to speed on the precise number and level of such ‘confidential’ dues since our offspring are set to be in hock because of them from between now, or 2018, until around 2043.

And if the answers to such requisitioning are ‘no’, or the familiar claim that they’re ‘in confidence’, other steps must be taken, including Parliament’s Public Accounts Committee launching an item by item investigations about such liabilities and seeking the auditor-general’s assistance.

If that fails, Mark McGowan-led Labor must ensure all the state’s outstanding obligations – public and those ‘in confidence’ – become the central issue of election 2017.

Only then will voters be able to judge the Barnett-led coalition; not by what its members think of themselves but rather on what they’re hiding, as Monsieur Malraux warned.