SPECIAL REPORT: Business News has been tracking changes among WA’s accounting firms for 25 years, including seminal events like the collapse of Andersen and the break-up of the old PKF practice. 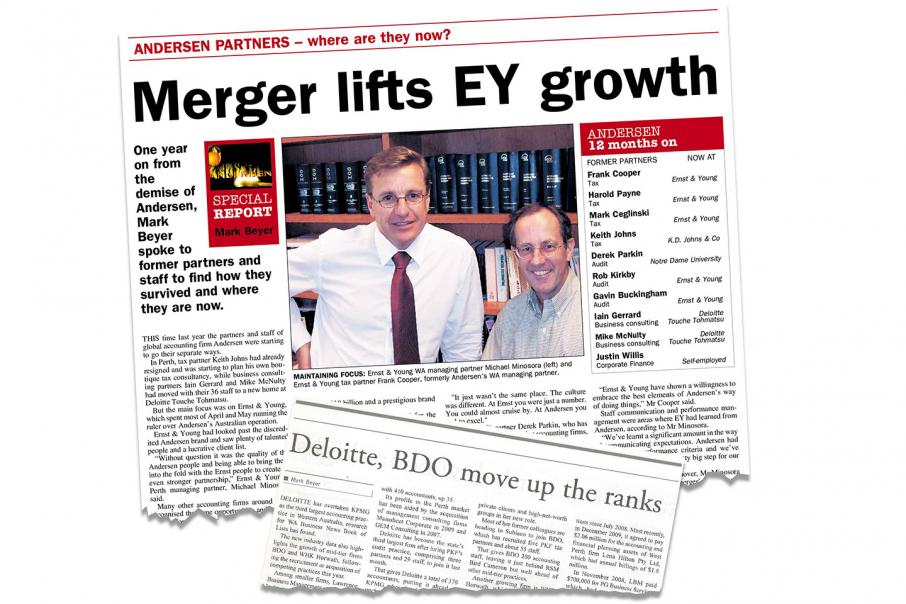 Business News has been tracking changes among WA’s accounting firms for 25 years, including seminal events like the collapse of Andersen and the break-up of the old PKF practice.

Numerous local and international mergers have shaped Western Australia’s accounting sector over the years, along with the occasional collapse.

Key global events have included the merger of Arthur Young and Ernst & Whinney in 1989 to create Ernst & Young, now trading as EY.

Similarly, Price Waterhouse and Coopers & Lybrand completed a global merger in 1998 to create PricewaterhouseCoopers, which trades as PwC.

The last big global event to shape the industry was the 2002 collapse of Andersen, which was one of the ‘big five’ accounting firms.

Another major event that reshaped the local market was the 2010 break-up of the former PKF practice, which at the time was the sixth largest in Perth. 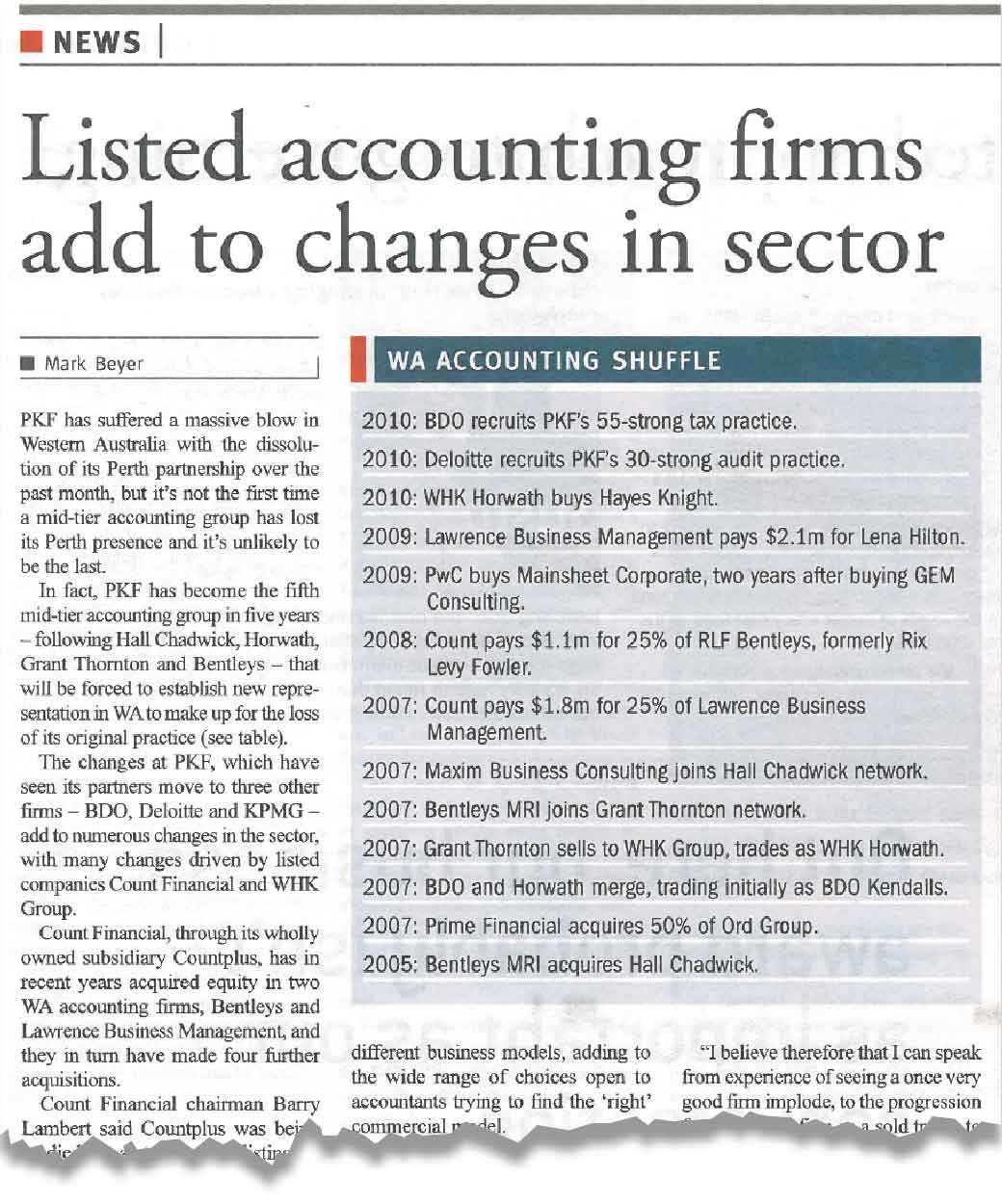 This provided a significant boost for Deloitte, which lured the audit practice (three partners), and BDO, which took on the tax and business advisory practices (five partners).

BDO is one of several mid-tier accounting groups to have gone through big changes over the years.

It traded in Perth as BDO Nelson Parkhill until 1994, when that firm merged with Deloitte.

BDO has progressively rebuilt its presence, notably via the merger of the BDO and Horwath networks in Australia in 2006.

Its WA profile was boosted in 2010 when it secured the five PKF partners, and again early this year when it merged with Tomkins Turner Corporate Advisory. 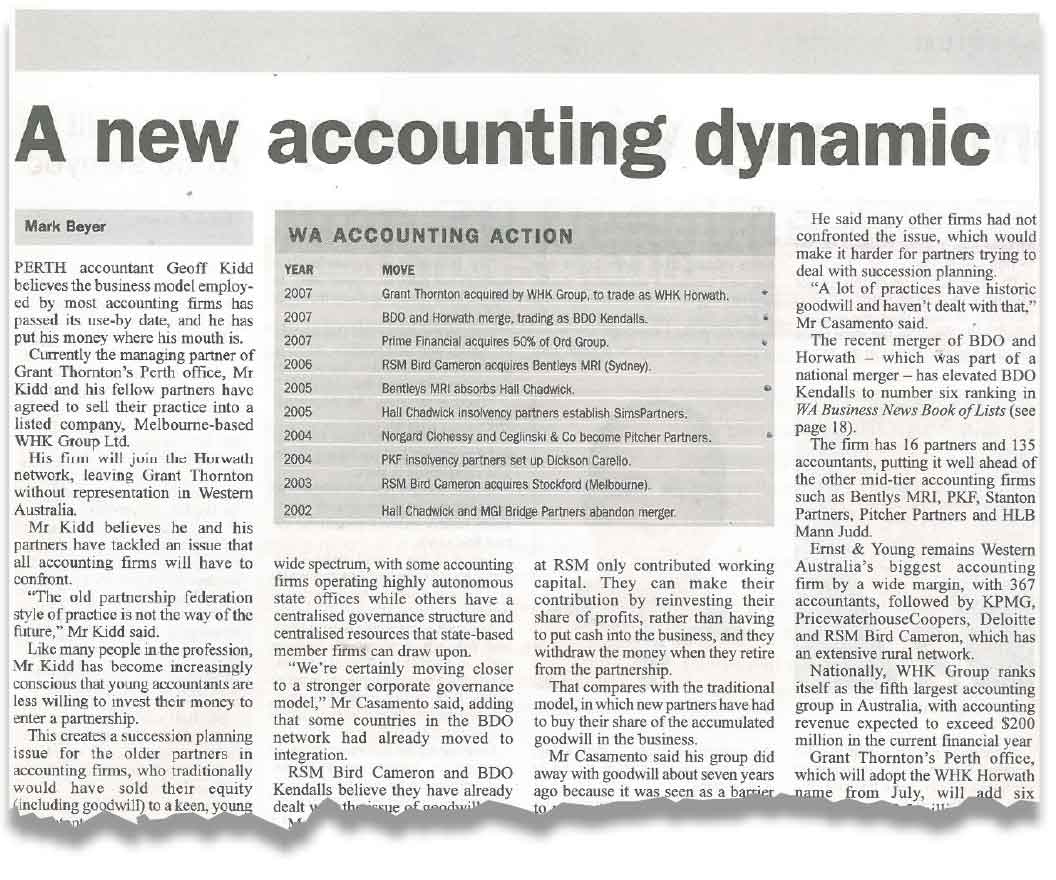 This combined BDO’s traditional strengths in valuations and expert reports with Tomkins Turner’s advisory experience in mergers and acquisition.

After all these changes, BDO is now well established as the sixth largest accounting firm in Perth.

Like many mid-term mergers, the combination of BDO and Horwath in 2006 was one of a series of cascading events.

It was triggered by Deloitte’s poaching of Horwath’s Sydney practice and BDO’s Melbourne office, leaving those two groups with huge gaps in their network.

Horwath plugged the gap in its network by snaring the Perth office of Grant Thornton, led at the time by Geoff Kidd.

A few months later, Grant Thornton re-established a Perth presence when it lured the WA practice of Bentleys MRI, led by Cam Ansell.

The moves continued in 2008, when local firm Rix Levy Fowler joined the Bentleys network and sold equity in the business to listed company Countplus.

The changes announced last week at PKF and Hall Chadwick can be seen in this light.

For the first time since the old practice was disbanded in 2010, PKF will have a full-service firm in Perth that is fully aligned to the national brand.

Similarly, Hall Chadwick will be ranked as a top 10 firm in Perth for the first time in more than a decade, after going through multiple changes over the intervening years.

As well as mergers and shifting brand alliances, the accounting sector in Perth has been shaped by numerous bolt-on acquisitions – usually driven by a desire to broaden service offerings.

PwC, for instance, has acquired two management consulting firms in WA – GEM Consulting in 2007 and Mainsheet Corporate in 2009 – while at a global level it bought Booz & Company in 2014.

(Mainsheet founder Maurice Argento subsequently joined BDO in 2013 before heading out on his own again in 2016 with Mainsheet Capital.)

EY‘s WA acquisitions include specialist tax law practice Norton & Smailes, which it bought in 2016; this was part of the broader trend for accounting firms to build their legal practices across Australia. 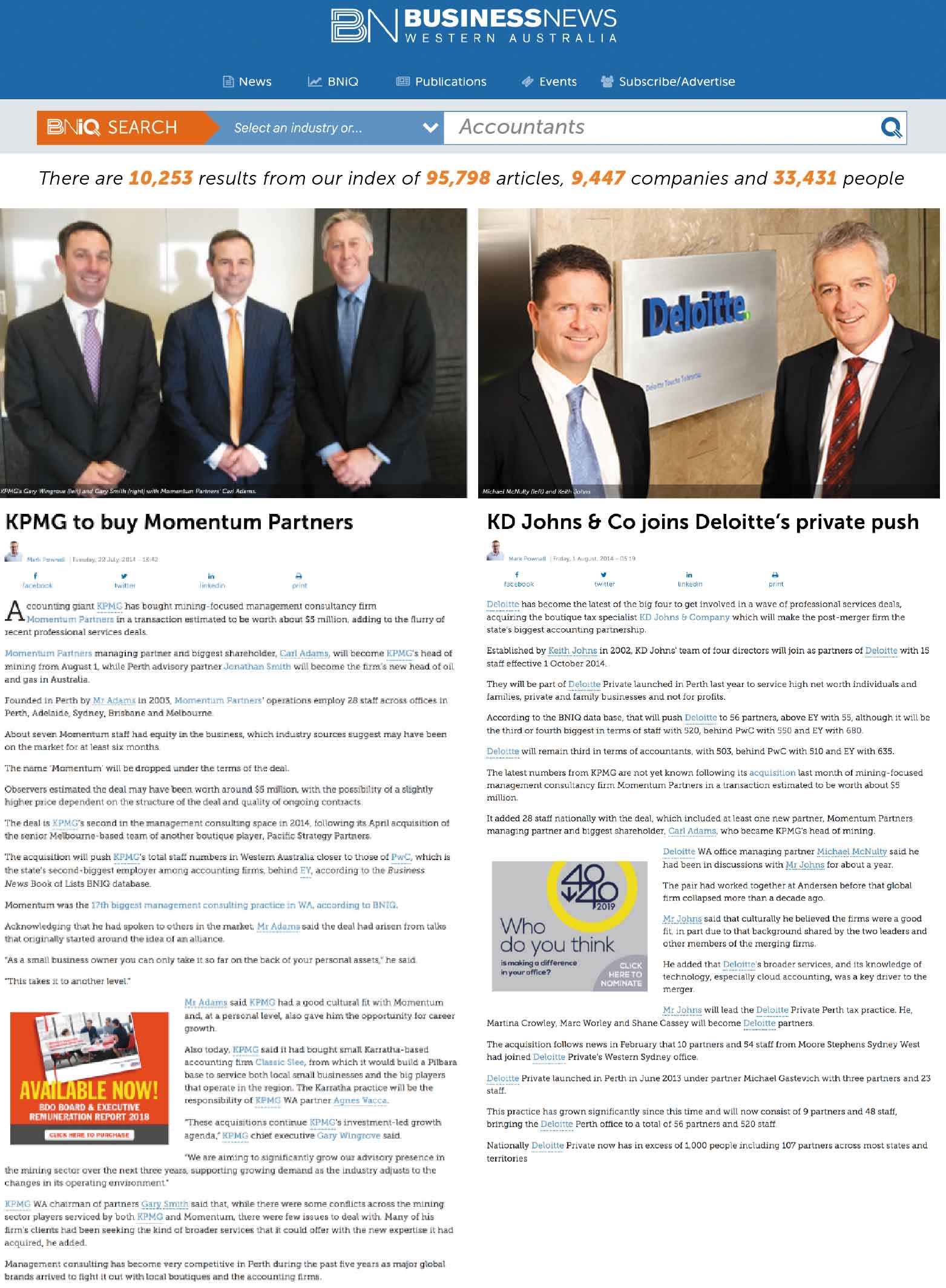 The KD Johns deal was one of many changes across the sector that flowed from the break-up of the old Andersen practice.

As noted, most of the Andersen partners joined EY, while consulting partners Mike McNulty and Ian Gerrard moved to Deloitte.

They are still there, with Mr McNulty heading up the WA office.

Tax specialist Keith Johns chose to go out on his own, setting up his boutique practice in West Perth.

Deloitte bought the business in 2014 to bolder the growth of its Deloitte Private practice.

As often occurs with acquisitions of this kind, Mr Johns served an agreed four years at Deloitte before retiring.

His colleague Martina Crowley – who also went from Andersen to KD Johns to Deloitte, and won a 40under40 award along the way – has also recently moved, joining PwC as a partner in June.

Despite these losses, Mr McNulty told Business News the private tax practice had enjoyed strong growth since the 2014 acquisition.

Frank Cooper and Mark Ceglinski initially moved to EY after the Andersen collapse before setting up their own boutique practices.

Mr Cooper teamed up with Michelle Saunders in mid 2015 to establish Cooper Partners,

While Ms Saunders continues to run that firm, Mr Cooper was lured away after just a few months to join PwC; he has since become a professional director.