Security of payments has been a hot topic of debate in WA construction, as the state government considers options to protect subcontractors. 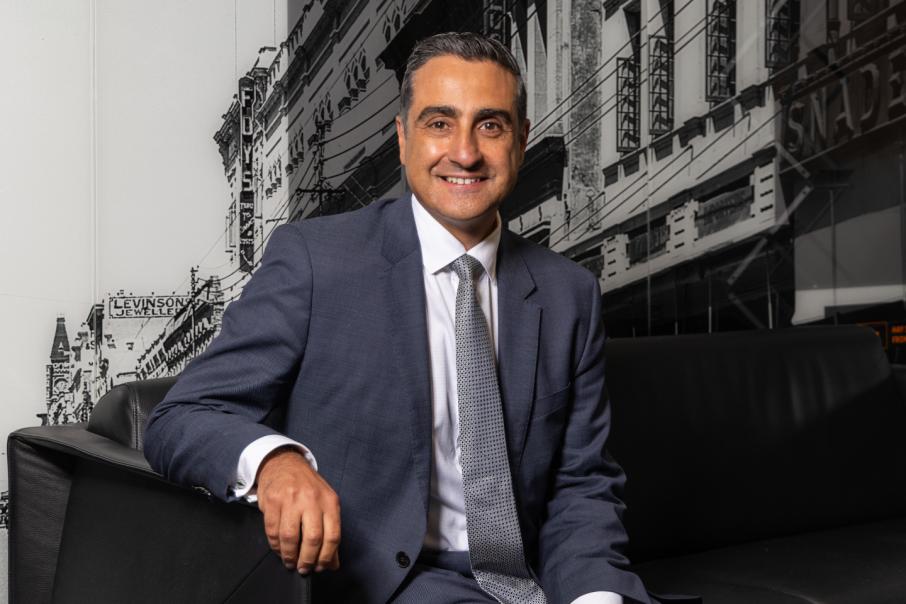 Security of payments has been a hot topic of debate in WA construction, as the state government considers options to protect subcontractors.

From top to bottom, Western Australia’s construction sector unanimously agrees that everyone in the industry’s supply chain should be confident of being paid for the work they have done.

However, for the state government, legislating exactly how to ensure payments occur on time throughout the supply chain has been a long-running challenge.

An indication of the drawn-out nature of the issue was that the report was the seventh of its kind produced in WA, making 44 recommendations to protect subcontractors in the event of company collapses. 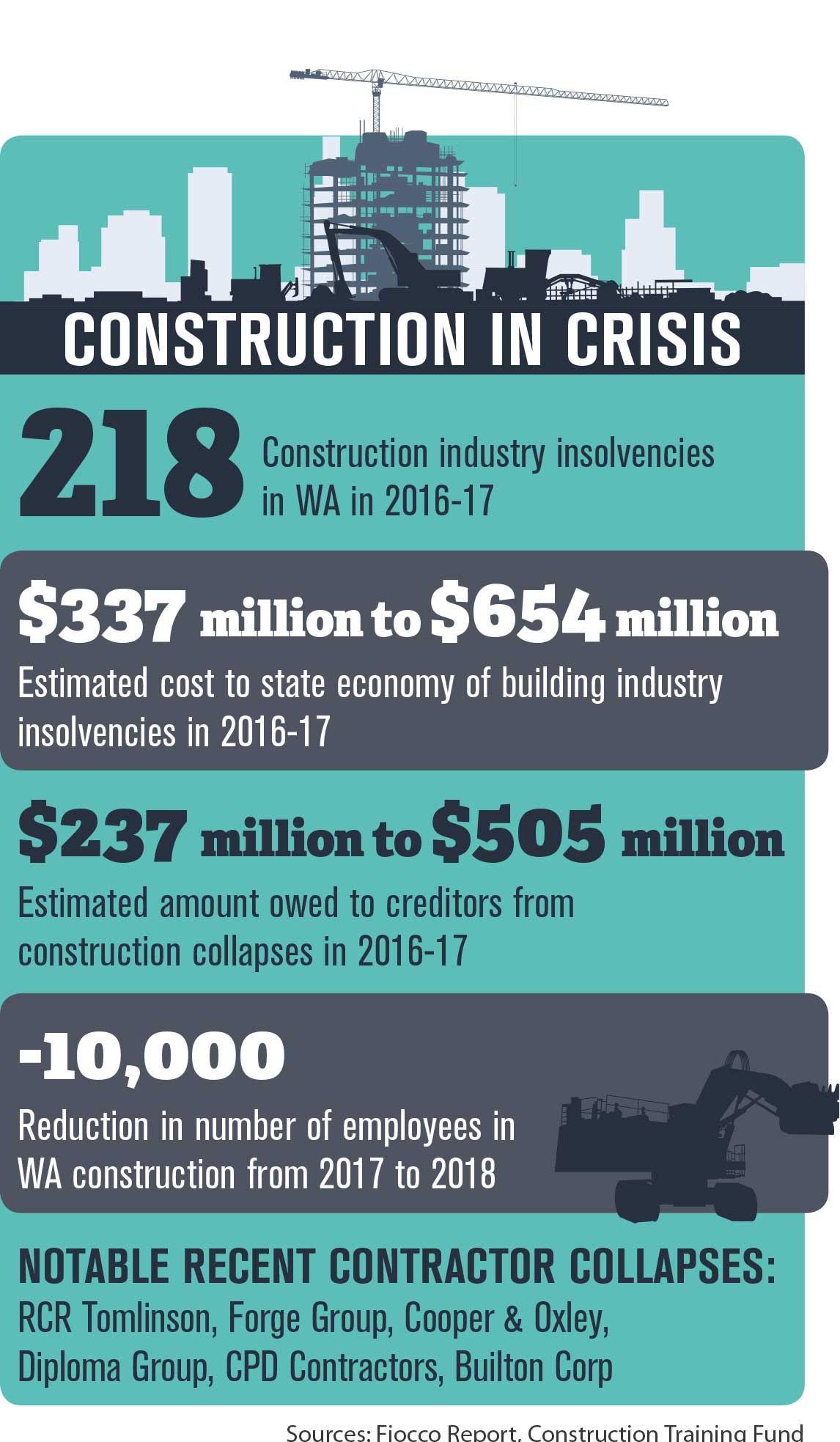 Recommendations considered to have the most impact for industry included changes to the Building Services Act to better define penalties for tardy payers and the introduction of demerit points against companies that demonstrate poor payment practices.

The Fiocco report also proposed the introduction of a statutory deemed trusts scheme where contractors and subcontractors along the supply chain hold funds in trust for parties further down the line.

HHG Legal Group director Murray Thornhill said there was nothing particularly new or radical proposed in the report that had not been raised before.

But that fact did not downplay the importance of strong legislation to ensure subcontractors were not ‘stiffed’ on payments – either as a result of builders going bust, or contractors that remained solvent but were nonetheless slow to settle their accounts, Mr Thornhill said.

The Fiocco report showed construction insolvencies rose from 127 in 2012-13 to 218 in 2016-17, with the value of total losses more than doubling over that time, using the report’s lowest estimates.

Of those 218 collapses in 2016-17, unsecured creditors received nothing in return in 189 cases, while in the remaining insolvencies, creditors received an estimated return of between 1 and 10 cents for each dollar they were owed.

“The people that ultimately suffer the most really are the subcontractors,” Mr Thornhill told Business News.

“Shareholders take a commercial risk, but the subcontractors are often mum and dad businesses and they just cannot survive even the blow of one unpaid contract.

“Surely that gives urgency to this kind of reform.

“The original Construction Contracts Act and the whole idea of security of payments legislation and rapid adjudication of disputes is all about keeping the money flowing down the contracting chain.

“Ultimately, it would benefit everyone, but particularly it’s important for subcontractors, it’s about their survival.

“It’s not about how you can make businesses more efficient or improve things, it’s about survival, and they are the engine room in a lot of these projects – they have particular skills that big contractors don’t often have in house.

“If we want to have a creative construction industry that encourages entrepreneurship, then you need to protect the little guys and provide a level playing field.”

However, while the industry agrees that security of payments is a pressing issue, many are divided on the potential introduction of statutory deemed trusts or project bank accounts, as considered by the report.

Master Builders Association WA executive director John Gelavis urged the state government not to rush to legislate any sort of new security of payment laws until it determined exactly how it would affect the sector.

“If you have a deemed trust, how will that operate, what training is required, are businesses capitalised enough to be able to manage a trust system?” Mr Gelavis said.

“There needs to be a process, and they have got to take it slow to make sure they get it absolutely right and engage with industry right through the process.

“If they rush some legislation through and it doesn’t work, then you could in fact have a converse effect than what they are trying to achieve.

“They have to work it through in a methodical and logical way to ensure that it is implemented correctly.”

Mr Gelavis said a particular challenge facing the state government was that there was no model in place in other states that was generally accepted as the best way to ensure security of payment.

He said because no other state in the country had introduced statutory trusts, it would be difficult to determine its impact on industry.

“Everyone has to be paid through the supply chain but this particular model isn’t being used in any state in Australia,” Mr Gelavis said.

“Government just needs to make sure right along the way that it will work, and the costs won’t have a significant impact on the sector, because that could compound things more for an industry that’s already struggling as it is.

“We are yet to see what it looks like, if you are holding money in trust. At this stage, the whole concept is that money is held in a trust, so what does that do to a small to medium enterprise’s cash flow?

“If you are a small subbie, are you capitalised enough to manage the process?

“If it is a trust model, then you can’t move money out of that trust, you can’t pay wages out because you’re struggling a bit, you can’t touch that money because it is for the next person down the chain.”

Multiplex WA regional managing director Chris Palandri, while not a believer that project bank accounts or deemed trusts were the right way forward to protect subcontractors, said security of payment issues had been exacerbated by tight profit margins driven by the market’s prolonged downturn in activity.

“Regardless of whether the market is strong or weak, like in the environment that we have now, there is not a long way to go to cut margins.

“Net margins for builders generally sit around 2 per cent, so there is not a lot of wriggle room if something goes wrong.”

PACT Construction managing director Jason Kunkler said that environment had caused some trepidation among developers, which were increasingly seeking certainty that the builder they engage will still be around to finish the job.

“Particularly, over the past one to two years where we’ve had builder failure and we’ve had subcontractor failure, clients in the market today would in some instances not be so sure about who they are partnering with in project delivery,” Mr Kunkler said.

“That’s been our experience at PACT, there are lots of good questions asked around how strong we are financially, how good is our balance sheet and what our performance is like over a track record of a number of years and in certain project types.

“There is a real good qualification process going on and I think with our business we are fortunate enough to have the backing of the ABN Group and being able to offer that certainty of outcome for all of our clients and customers.

“We have performed well over our 15 years and we are capable of performing into the future.”