Local charities and corporates are turning to an online platform to more efficiently source and gift items for people in need. 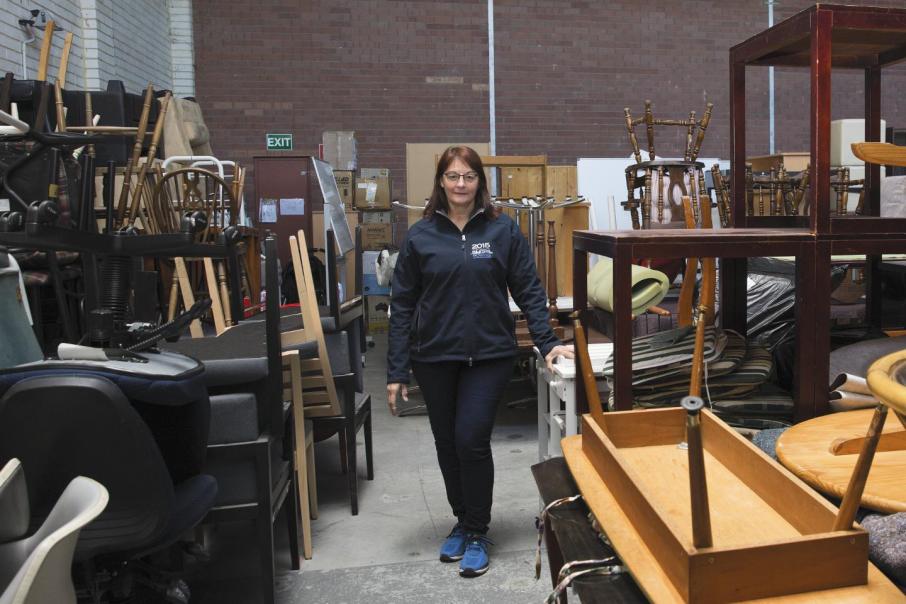 A local charity that redistributes donated household items to those in need has found an ally in a website that matches donors with those who require a helping hand.

Starting Over Support holds dozens of donated chairs, tables and miscellaneous household items at its Bayswater warehouse, with each object destined for the home of someone who is rebuilding their life.

The charity works to assist individuals and families who have escaped crisis situations, such as domestic violence or homelessness, via the provision of items needed for setting up a new home.

Debbie Mason founded SOS in 2014 when she identified a need in the services sector – relief organisations would often receive items but had nowhere to store them.

Backed by fundraising drives and a grant from Lotterywest, SOS has since worked with more than 70 different refuges as well as government and non-government agencies across Western Australia, and has grown from delivering an average of 100 goods in its initial year to more than 330 in the past 12 months.

“The biggest issue in WA at the moment is the money side of philanthropy,” Ms Mason told Business News.

“People are doing it tough in Perth, yet they are amazingly generous; they may not give you the money to go and buy a shirt, but will give you the shirt off their back.”

Dealing with limited floor space was another.

Ms Mason reached out to Australian website GIVIT, which matches the donors of goods with those who are in need of specific items, for free.

The online platform operates like a virtual warehouse; people upload an image of the item they want to donate to the site, listing their postcode and transportation specifics. Registered charities can then browse its catalogue to source items suited to its clients’ needs.

Since it expanded its operations into WA last year, thanks to the financial support of the Bankwest Foundation, GIVIT has facilitated more than 54,000 donations for more than 125 charities across the state.

“If people call us to donate something we don’t need, we direct them to GIVIT,” Ms Mason said.

“It’s another avenue where things that may be too good to throw out can go.”

WA corporates have also tapped into GIVIT. During the past year, KPMG’s Perth office has donated computer monitors, webcams and scanners, and BHP Billiton gifted 20 dishwashers, which went to assisted living programs run by disability service providers including the Autism Association of WA.

“We wanted to donate the items because most of the dishwashers were still in good working order,” he said.

“It would have been a waste to send them to landfill.”

Supermarket giant Coles has used the platform to distribute food vouchers after the Yarloop fires in January 2016.

GIVIT chief executive Juliette Wright, who founded the organisation in 2009 in Brisbane (where it is headquartered), said the site had grown from helping charities source everyday items through to managing the influx of donations following an emergency.

Ms Wright said GIVIT had since partnered with the Queensland government to establish a dedicated disaster recovery service, with the Bankwest Foundation enabling the organisation to help in the event of a WA emergency.

“It’s a new digital way to give and people in WA have really embraced GIVIT,” Ms Wright said.

“Once someone donates (on GIVIT), they realise how easy it is and keep doing it; it’s not just dumping your stuff but actually making sure someone else receives a quality good.