There’s an easy fix for the busted Senate preference system currently in operation, but little political will to take the first step. 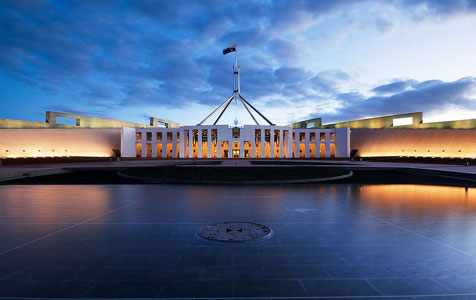 BIG HOUSE: Under the current system, senators can be elected with minimal grasp of the electoral system and issues.

Western Australia’s extraordinary half Senate by-election to fill six positions should be the last held under the current rules –the system has degenerated into a farce.

Common sense demands that action be taken. But whether the federal coalition government has the courage to initiate change, or the Labor opposition and the Greens have the gumption to lend their support, will be an important test for the major parties.

The issue isn’t that candidates must poll a quota representing 14.3 per cent of the vote to be successful. Rather, it’s when that quota is achieved courtesy of a complex mathematical formula via the preference allocations of myriad micro parties, that the integrity of the electoral system fails.

There’s no problem with candidates nominating. Seventy-seven names will be on the by-election ballot paper, and a $2,000 nomination fee will either have been paid by them, or on their behalf, for the privilege.

It’s when parties can win a seat with only 2,997 primary votes, or 0.23 per cent of the total, that the system falls down. That was the record for Wayne Dropulich of the Australian Sports Party.

Marginally better was the performance of Dio Wang of the Palmer United Party, who gained 65,595, or 5.01 per cent. Mr Wang was elected on the first count, but was edged out by Mr Dropulich on a recount, before the whole election was declared void thanks to 1,370 missing votes.

The present system was adopted during the first term of the Hawke government, which increased the size of the House or Representatives, and consequently the Senate. Each state gained two more Senate seats, taking their total to 12 per state.

Labor’s ‘Mr Fixit’, the genial Mick Young, masterminded the changes, which were greeted with hardly a murmur. The Liberals were in on the deal.

Significantly for smaller parties, the increased number of senators meant that the then quota of 16.6 per cent was also reduced. The importance of that fact was not readily apparent but, subsequently, smaller parties such as the Australian Democrats, the Australian Family Party, the Greens and the Democratic Labor Party have had reason to the grateful.

As the by-election will be held under the same rules that applied last September, it’s possible that a candidate from a micro party could gain a seat again on April 5, courtesy of a complex preference swap by some parties most voters have never heard of. That, of course, is within the current rules.

Two changes are needed to reduce the likelihood of little-known candidates from obscure parties winning a seat with a minimal primary vote, thanks to clever manipulation of the preference system.

The first is that lead candidates must score a minimum number of primary votes. Five per cent seems a useful figure, which reflects a reasonable level of support in the community. Surely a candidate must have a critical following to be eligible to be called a ‘senator from Western Australia’. And voters need to be confident that candidates have a grasp of the electoral system and issues.

The second deals with the crucial failing of the current system, and one the big parties would be reluctant to change. It’s the above-the-line voting, which enables the parties to make it easy for voters, who only have to put a ‘1’ next to the party of their choice – and that means they also endorse that party’s distribution of preferences.

How many voters bother to check the preference allocation? Voting above the line is so painless that voters hardly need to think. But it’s also dangerous, because it’s open to manipulation.

The solution is to dump above-the-line voting and require all voters to only indicate their preference for candidates equal to the number of vacancies. In this case it’s simply ‘1’ to ‘6’. Not too hard for electors, easy to count, and the complex preference lists and mathematical geniuses are cut from the process. Elections are supposed to find out which candidates the people prefer, and that’s what the changes would do.

The campaigns being run by the federal parties ahead of the by-election are an eye opener. The Liberals are pursuing the opposition for failure to support abolition of the carbon and mining taxes, which Labor in government introduced. Labor is actually attacking WA Premier Colin Barnett and the state government’s education, health and employment policies, on the basis that this is what voters can expect if the coalition controls the Senate.

Bad luck for those hoping for some vision from either side.

Having Prime Minister Tony Abbott, and opposition leader Bill Shorten, paying more attention to WA is no bad thing. Some past federal leaders have had great difficulty finding the time to venture west, even annually.

But Mr Shorten introduced a novel touch, urging voters to “elect a strong team that will stand up for Western Australia”. In the current climate of strict party discipline, that would be something.