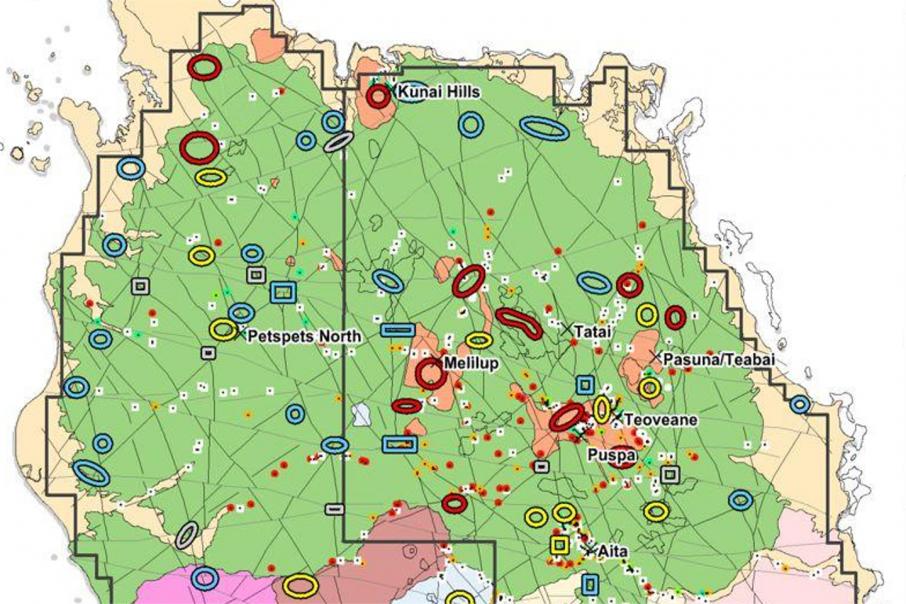 You get the impression that it was always coming, but ASX-listed and Bougainville Island focussed porphyry copper-gold explorer Kalia Limited has hit the jackpot this week, outlining 64 new porphyry and epithermal exploration targets from a detailed geophysical interpretation of last year’s comprehensive airborne survey over its Mt Tore JV tenements.

The survey covered more than 1700 square kilometres and unearthed 12 priority copper-gold targets, including two in the far north of the western tenement EL04, which previously had no geophysical coverage at all.

The triumph comes after data analysis of the first airborne geophysical survey conducted on Bougainville since 1987, confirmed that the intrusive geological complex is larger than previously thought, with multiple deep intrusions identified as possible primary feeder zones for the shallow porphyry copper-gold mineralisation being sought.

According to Kalia, there is now an independent correlation between the newly interpreted geophysical information and the existing geochemical data, to outline the very prospective nature of the company’s tenements.

Following geological interpretation and on-site ground reconnaissance, Kalia expects to commence drilling on priority exploration targets in the June quarter of this year.

Kalia Managing Director Terry Larkan: “Our view has always been that EL03 and EL04 would have multiple targets. The quality and number of the targets revealed through the geophysics … exceeds our expectations and clearly demonstrates the unique opportunity presented … with this ground in Bougainville.”

Mr Larkan added: “I am not aware of anywhere else that offers the geological potential for discovery that we have disclosed today.”

“Our geologists continue to deliver samples that give positive assay results for gold, copper and other desirable minerals. They are already working on the top ranked targets returning late last week from the first trip to Melilup.”

“This geophysical analysis together with the ongoing assay results we are getting from rock chips taken from outcrop gives all the positive signs needed to push on at an increased pace to drilling our first target in the coming quarter.”

The company said that the Melilup target in the eastern tenement EL03 is now considered its top-ranked target on Bougainville.

Concerning the new data available to Kalia, independent geophysical contractor Fathom Geophysics stated: “This new dataset provides an excellent insight into the geology and structural framework of the project area and will assist with optimising on-ground target follow-up.”

“The 2018 geophysical data will allow the (Kalia) team to more accurately plan for expeditions onto known targets and is especially important for EL04 where the complete lack of geophysical data has previously hampered effective exploration activities.”

The style of porphyry copper-gold deposits Kalia is seeking on Bougainville are highly sought-after globally because they boast some of the largest ore reserves of these desirable commodities.

The company is also excited about the high-resolution magnetic data received from the recent survey work, which will allow Kalia to vector into potentially mineralised porphyries within its tenements.

The magnetic data response appears to coincide well with the topography of the island, which the company believes is representative of the thickness of the in-situ volcanic units – being thicker in the easternmost EL03 tenement and thinner in excised river valleys elsewhere.

According to Kalia, the magnetic responses of economic porphyries within south-east Asia are well documented and are often used as a targeting guide for these ore systems.

If there was any doubting the company’s perseverance on Bougainville or its $1m budget thrown at the detailed geophysical data collection and subsequent interpretation, it could be summed up neatly in a newsletter issued by the Society of Economic Geologists newsletter in 2018, which stated: “Bougainville Island has had a complex … (geological) … history dominated by two phases of magmatism …”.

“The world-class Panguna porphyry copper-gold deposit formed during the second phase of magmatism. With the application of modern exploration techniques, there is significant potential for the discovery of porphyry, epithermal, and skarn deposits on an island that has received very little exploration expenditure during the last 47 years.”

Given that the Panguna deposit has a remnant JORC-compliant mineral resource of 1.8 billion tonnes grading 0.3% copper and 0.34g/t gold for nearly 20 million ounces of gold and 5.4 million tonnes of copper, you can appreciate why Kalia thinks it is sitting on something pretty special on Bougainville Island.

This week’s very encouraging results from the interpretation of the geophysical survey program would have only enhanced this view even further.