History lessons help us recycle past

Not everything new is momentous, and not all that is old should be forgotten. 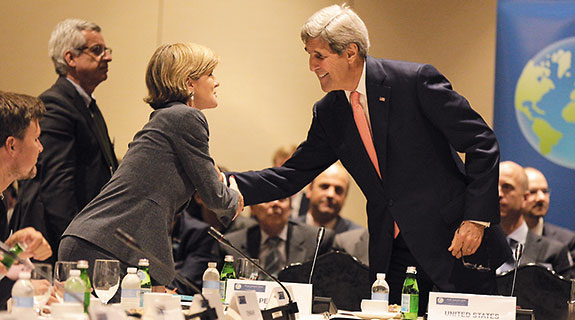 CONTACT: Foreign Minister Julie Bishop, who is a keen user of social media, greets her US counterpart John Kerry.

Not everything new is momentous, and not all that is old should be forgotten.

I have been enjoying a fabulous audio-book version of humorous writer Bill Bryson’s One Summer: America, 1927, an insightful snapshot of the period just before Wall Street crashed and brought on the Great Depression.

The signature themes of that summer – pilot Charles Lindbergh’s solo Trans-Atlantic flight and baseball player Babe Ruth’s record number of home runs – are interspersed with all kinds of other newsy events and goings on, accompanied by historical context that helps the reader understand the undercurrents of American society and the broader world at the time.

Much of it, of course, is vaguely familiar, but the rich detail and exceedingly funny delivery make it very engaging.

So why is this work relevant to business today?

Well, one interesting theme is the massive changes in publishing, broadcasting and entertainment taking place in that year – some of which had an immediate impact, others that were dormant, but many that will help educate us with regard to what is taking place online today via social media platforms.

We have a story this week on the Klout scores of leading political and business figures in Western Australia. That may seem obscure, until you think about the impact of social media such as Twitter on our political scene. The so-called 24-hour news cycle, in part driven by online news and social media, is being criticised as a threat to good governance.

Perhaps that is the case, but more likely there is an adjustment under way both for leaders and the audience – just as there has been in previous structural changes to the media landscape.

I had to note that both federal cabinet ministers Julie Bishop and Malcolm Turnbull used social media to quash rumours published online by a radio host ahead of the Liberal Party leadership spill motion that they were holding a (supposedly) clandestine meeting. Such interactions will be view differently by those interested in the events of last week.

Was it a wasteful distraction or efficient first-hand communication? Was it just thoughtless rumour-mongering or more timely determination of the facts?

You be the judge.

Firstly, Bryson’s book dismisses any notion that the cult of celebrity is a new thing created by the media in the past few years or even decades. Huge crowds, massive audiences and ridiculous invasion of privacy accompanied anyone who had a hint of fame or notoriety.

That aviator Lindbergh was later forced into hiding and foreign exile after the kidnapping and murder of his child shows that obsession with the famous is nothing new.

What struck me as most interesting about this period from a media perspective in 1927 was the following:
• radio, still relatively new, became networked across the US;
• patents for the key components of television were lodged;
• the first feature movie with talking sound was released; and
• the release of Showboat established the modern standard for Broadway musicals.

Firstly, radio was on the march. The National Broadcasting Corporation was formed in 1926 and big audiences were reached for the first time in 1927 as Lindbergh returned to the US, Ruth hit his record home runs, and boxer Jack Dempsey attempted to regain his heavyweight crown.

Intriguingly, television was demonstrably capable of working but did not become a powerful media force for decades – especially in the news sense, where it took until the 1960s for politicians to become particularly adroit at using it.

And, just as Broadway had a defining moment with a new type of musical, it was about to lose its stars to Hollywood where acting was shifting beyond the soundless skills required for silent movies.

Both the Broadway musical and Hollywood remain as relevant today as ever, albeit sharing the entertainment space with a host of alternatives. Radio, too, is a key part of the news spectrum.

For all the talk of the Twittersphere, radio host Alan Jones was considered to have had a considerable impact on the Queensland state election by laying siege to former premier Campbell Newman.

All this suggests to me that the restructuring of industries doesn’t always happen with the cataclysmic results we often read about in the case studies. Certainly there are the Kodak moments, when new technology such the digital camera almost completely renders obsolete a product such as physical film.

But that is rare.

Social media, as part of the greater development of online publishing, is establishing its place. I am sure it will play a significant role in communications and will be used to good and bad effect by leaders of all types, as are older forms of communications – like our newspaper and, dare I say it, actually physically meeting people and pressing the flesh.