The state government may be struggling on some fronts, but it had some good news to announce on affordable housing. 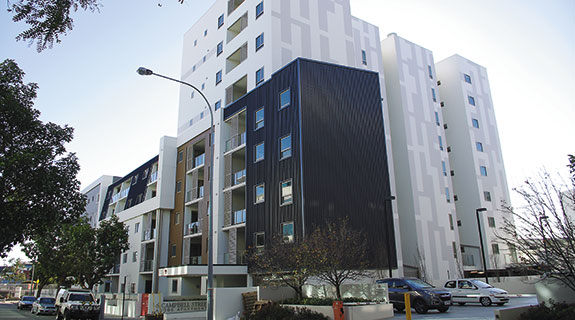 AFFORDABLE: The Abode apartments are an example of the choice and diversity needed in the WA market.

The state government may be struggling on some fronts, but it had some good news to announce on affordable housing.

The state government has set a new target for affordable housing, after surpassing its previous benchmark with the completion of the Abode Apartments in West Perth.

Housing Minister Colin Holt said the 86-apartment Abode project was an example of the government’s commitment to providing homes for those on low and moderate incomes.

The Department of Housing partnered with Diploma Group to develop the land, which was previously a car park.

The Abode partnership followed a similar deal with Diploma in Northbridge, with the One on Aberdeen apartments completed late last year.

“It is a high-quality apartment building, right next to a train station, and on the doorstep of the CBD,” he said.

“We know not everyone wants to live in the traditional block or in the outer suburbs, especially our younger generation.

“People are increasingly prepared to trade space for place, provided that it is in the right location

“Abode exemplifies the benefit of partnering with the private sector to provide just that.”

Mr Holt said housing affordability remained a growing challenge in Western Australia, a side effect of the state’s economic prosperity of recent years.

“Affordability affects almost all of us in one way or another,” he said.

“Most of us have children, parents, friends or family members who are affected by the high cost of buying or renting a home.

“Housing affordability is most acutely felt by those on lower incomes, from workers in important industries like tourism, hospitality and retail, through to the most vulnerable members of our community such as the aged.”

Real Estate Institute of WA president David Airey congratulated the state government for surpassing its target and welcomed the setting of a new one.

Mr Airey said that, while Reiwa was a strong advocate of private home ownership, it recognised the need for adequate affordable, social and community housing.

“Cost of living in WA is higher than most parts of the east coast, so any program that helps people to live more comfortably around the state is very important,” Mr Airey said.

“Not everyone is in a position to secure a mortgage and maintain loan repayments; so as a society and community it’s important to take reasonable steps to ensure fairness and do what we can to prevent homelessness and improve housing affordability.”