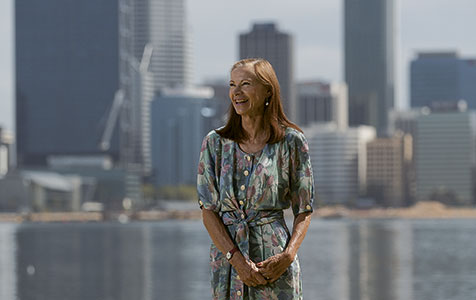 ADDING VALUE: Shirley In't Veld has moved into a number of non-executive board roles, including at eastern states-based companies with interests in WA. Photo: Attila Csaszar

There were few signs of the challenges awaiting Shirley In’t Veld at Verve Energy when she was appointed managing director in early 2007.

The state-owned power generator had been in operation for barely a year, following the disaggregation of Western Power by the Labor government.

Yet it became quickly evident that the newly created utility stood little chance of turning a profit while electricity prices remained in a decade-long freeze.

“My first 12 months at Verve Energy were a bit of a nightmare,” Ms In’t Veld told Business News. “Presiding over a government-owned loss-making entity, I can tell you, is not a lot of fun.

“At the time I don’t think anybody was aware that it was losing as much money as it was. I certainly didn’t understand that and I may not have taken the job if I had.”

While the dire state of Verve’s books presented an immediate challenge for Ms In’t Veld, adjusting to the politics of her first government role would also prove to be a significant test for the former Alcoa executive, who had previous senior legal, commercial and marketing positions with Mallesons, WMC Resources and Bankwest.

The legislation under which Verve was established required its board to strive towards making a profit and to behave in a commercial manner; but with the government making the final call on all decisions, politics often won out over commercial imperatives.

“The reality is, the board can be overridden by the government and there are times when the politics gets in the way of what you want to do commercially,” Ms In’t Veld said.

“There were times when it was incredibly frustrating but I was very fortunate, certainly in the last few years that I was there, to have a first-class board and a first-class chairman in (former Western Power chief executive) David Eiszele.”

Verve reached a major turning point in 2010 when it achieved profitability for the first time, reporting a net profit after tax of $97.5 million.

The turnaround was largely driven by the Barnett government’s unpopular decision to increase electricity tariffs in 2009, a move which acknowledged the need to make power charges more reflective of the high costs of supplying electricity.

The government has subsequently introduced modest tariff increases on an annual basis but prices remain well below the cost of distribution.

The cost to the government of covering this difference, in the form of operating subsidies, reached $371 million in the 2013 financial year.

While tariff hikes have provided the Labor opposition with a potent line of attack amid concerns about the cost of living, Ms In’t Veld said the new price regime had gone some way towards rebalancing distortions in the market.

“There was a lot of flak but the reality is that they did start to drive consumer behaviour,” she said.

“Consumers did look at what they could do to reduce their electricity bills. It led to a far greater awareness of what electricity was costing.”

Ms In’t Veld stepped down as Verve managing director at the end of her five-year contract in 2012 – a decision she said was partly motivated by the government’s determination to push ahead with a merger of Verve and Synergy.

“When I came in to Verve, it was one year after the disaggregation of Western Power and I could fully understand why my predecessor (John Lillywhite) had decided after three months the job wasn’t for him; it was a mess,” Ms In’t Veld said.

“But then you get it back on the rails, you get it humming along quite nicely and everybody is settled and then all of a sudden it’s back on the agenda.

“Again, you get all this uncertainty. There’s this high level of distraction in the business and I’m quite sure that has a fairly significant impact on productivity.

“I actually think, on balance, it’s unfortunate for the state in the long run and it’s probably going to add to the cost of power, in terms of the hidden costs of those people issues.”

The merged entity, which trades under the Synergy name, came into effect at the beginning of this year.

Ms In’t Veld’s successor at Verve, Jason Waters, is chief executive of the new entity, while Michael Smith has taken the chairman’s role.

Premier Colin Barnett justified the merger by claiming that the disaggregation of Western Power pitted Synergy against Verve when it came to bidding for contracts and that a merger would enable them to operate more efficiently.

However industry groups such as the Chamber of Commerce and Industry WA have argued the merger will deter private investment and will have little effect on reducing the costs of electricity to households and businesses.

“The premier is thinking that he wants a big state-owned utility that can hold its own with the big oil and gas players in negotiating contracts and won’t get walked over,” Ms In’t Veld said.

“But the reality is Verve/Synergy now has a 20-year coal supply agreement with (Premier Coal owner) Yancoal and it’s probably got two-thirds of its gas tied in with an agreement with the Gorgon joint venture for the next 20 years, so it’s not going to be in a position where it has to do that for quite some time.

“I actually think that the benefits you would have gotten from keeping them separate and moving steadily down the path to privatisation and competition would have outweighed that in any event.”

Ms In’t Veld argues the establishment of a single board of directors with oversight of both entities, as exists in New South Wales, would have dealt with competition between Verve and Synergy without the collateral damage of a fully-fledged merger.

Despite her concerns about the merger, Ms In’t Veld admits the private sector tends to regard government-owned entities as a bit of a soft touch.

“If they don’t like what you’re doing … they’ll go and talk to the premier or the minister and go right around you,” she said.

A case in point is Verve’s long-running legal dispute with the operators of the North West Shelf project, the state’s primary domestic gas source, in the wake of the Varanus Island explosion in 2008.

Verve has been entangled in legal action against Woodside Petroleum and its North West Shelf Venture partners for several years, claiming the petroleum giants had uses the crisis to break an existing gas supply contract and charge exorbitant prices.

“I don’t necessarily think they would have done that had we been a major private sector player,” Ms In’t Veld said.

“I think it’s just that there is this perception that government-owned entities are a softer touch and you can just ride roughshod over them.”

The WA Supreme Court ruled in Verve’s favour last year but the High Court has since agreed to hear an appeal by Woodside and its partners, which is currently before the court.

One energy reform Ms In’t Veld was happy to see introduced was the state government’s controversial domestic gas reservation policy, despite acknowledging that it probably didn’t quite tally with the market rationalists’ view.

“When Verve was negotiating the gas supply agreement with Gorgon, (Chevron Australia managing director) Roy Krzywosinski did say to me that if it were not for that policy, there is no way they would have put any gas into the domestic market,” she said.

“It would have all gone to LNG projects and that would have undoubtedly meant gas shortages for WA. I think experience has shown that (the policy) has worked in WA.”

Having stepped away from her executive role at Verve, Ms In’t Veld now focuses her attention on a number of board roles.

She became a non-executive director at Sydney-based national transport infrastructure company Asciano in 2010, and also sits on the board of Perth Airport, Duet Group, and aged care group Juniper.

Ms In’t Veld also holds board positions at CSIRO and the Chamber of Commerce and Industry WA and is a council member of the Australian Institute of Company Directors in Western Australia.

In the case of Asciano and Duet Group, both companies have operations in WA – the Dampier to Bunbury gas pipeline is Duet Group’s biggest asset – yet neither company had a Western Australian on their board when Ms In’t Veld was recruited.

“On many occasions you do feel as if you’re from a foreign country because their thinking is very much focused on the east coast,” she said.

“(But) I know that I’ve been able to add value through my knowledge of what is going on in the west.”

Most recently, she has been appointed to an expert panel established by the federal government to review the Renewable Energy Target scheme.

The review will consider the contribution of the RET in reducing carbon emissions and its impact on electricity prices and energy markets, with the panel due to report to the government by the middle of the year.