SPECIAL REPORT: Earnings for the state from the powerhouse minerals and energy industries have softened, but agriculture, among other sectors, will create opportunities. Business News also takes an in depth look at Bunbury port, where a big expansion plan needs community backing and solid regional demand growth. 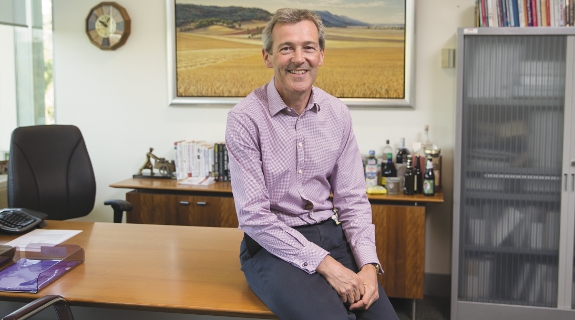 Earnings for the state from the powerhouse minerals and energy industries have softened, but agriculture, among other sectors, will create opportunities. 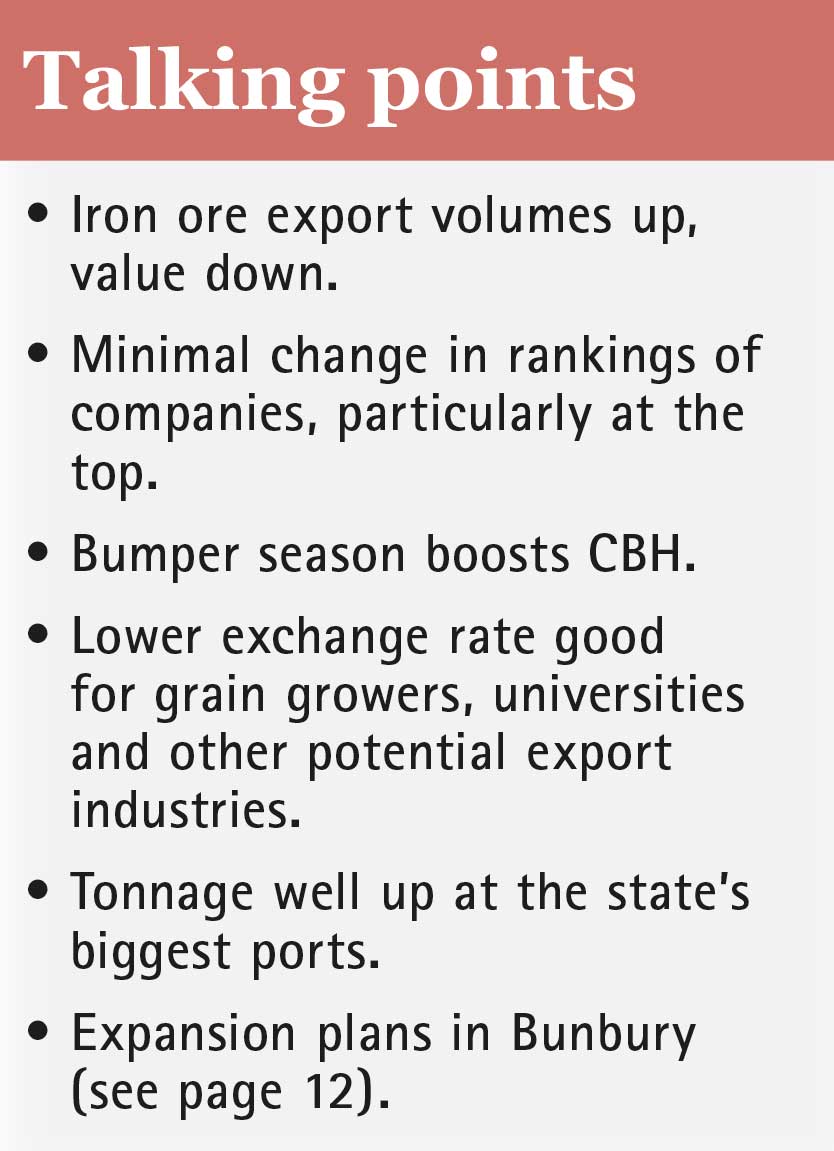 Western Australia’s biggest exporting companies have taken a sizeable hit from the drop in the state’s export turnover, with their combined trade revenue down about $10 billion.

BHP Billiton, Fortescue Metals Group and the North West Shelf Venture felt the pain most sharply, according to the annual BNiQ exporters roundup, despite throughput at the state’s major port facilities rising in volume terms.

The data reflect both the precipitous fall in the price of the state’s major commodity, iron ore, and the substantial increase in supply that has entered the world market as major producers ramp up production.

LNG exporters are softer, driven by the lower oil price, while grain farmers have had a three decent years in a row, despite increasing pressure from international competitors. 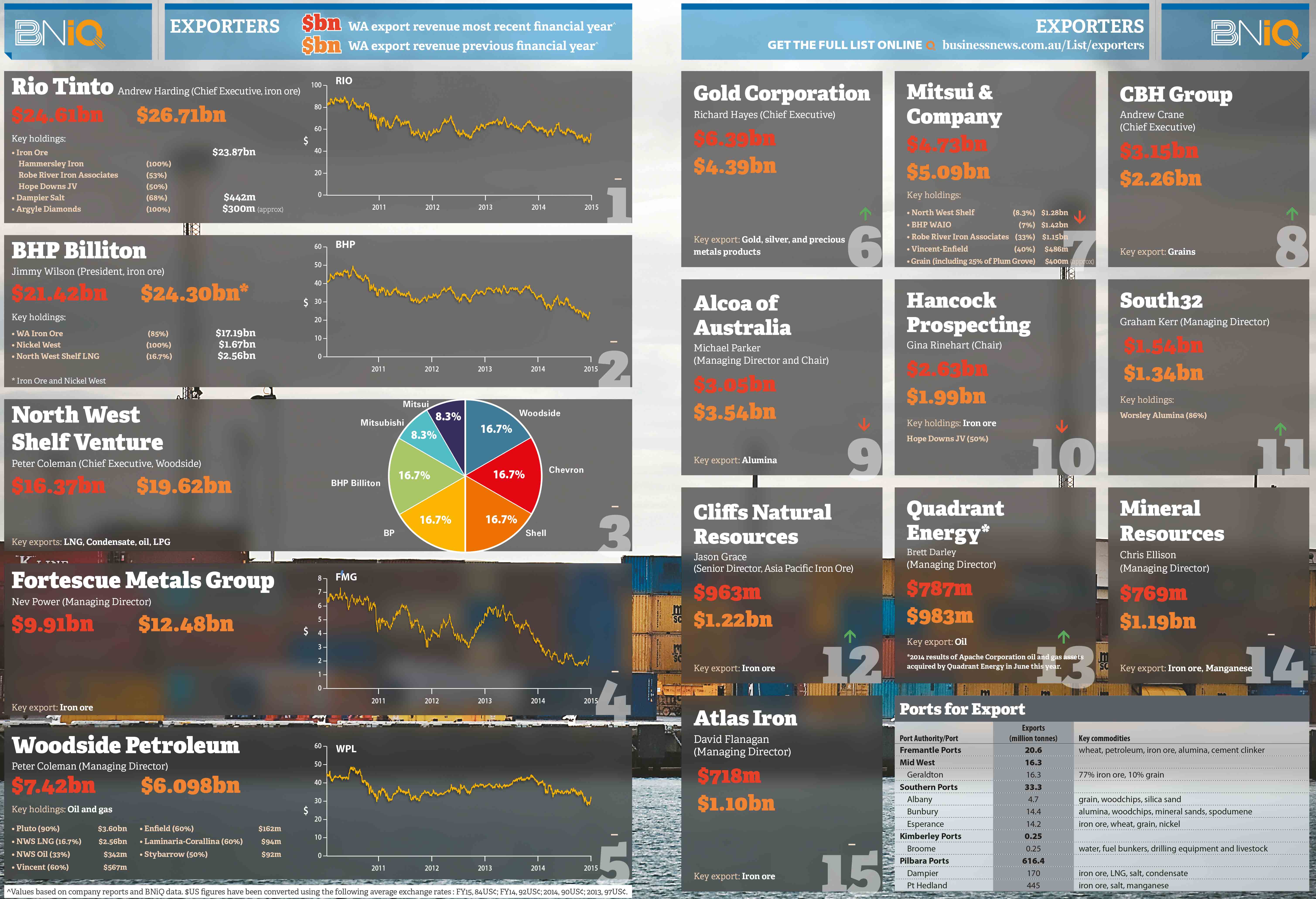 That fall was largely driven by falling trade with China, which was about 20 per cent lower at $55 billion for that period compared with $70.4 billion the year previously.

Trade with Japan was about $4 billion lower at $20 billion in the 2015 financial year.

The BNiQ biggest exporters list show the damage was heavy at the top, with BHP iron ore exports about $5.5 billion lower at $17.2 billion in 2014-15, although the company remains second on the list of exporters.

Ore sales for top exporter Rio Tinto were down, too, to $23.9 billion, although that figure was for the 12 months ended December 2014.

Fortescue Metals Group was 20 per cent lower at $9.9 billion.

“But the value fell … because the year-average Australian dollar price fell.

“That’s the production phase of the resources boom going into full swing.”

Export returns for other iron ore producers were reduced.

Overall, iron ore producers in the top 15 fell around 15 per cent in aggregate.

There was positive news, however, with exports for Gold Corporation up $2 billion to $6.4 billion on the back of an improving Australian dollar gold price, while Woodside Petroleum increased exports by 22 per cent thanks partly to the Pluto project ramp-up.

BHP Billiton offshoot, South32, joins the list for the first time at 11th position, with exports from the 86 per cent owned Worsley Alumina operation up $200 million to $1.54 billion due to the exchange rate and a lift in production.

Despite the dominance of resources players on the list, the agricultural industry, particularly grains, has continued to be a performer in the face of international competition and mixed weather.

Consequently, bulk grain handler CBH Group has moved up two positions on the BNiQ biggest exporters list, into eighth place, surging ahead of both Alcoa of Australia and Hancock Prospecting.

CBH Group chief executive Andrew Crane said the industry had some strong points in the global market, although would need to run a more efficient supply chain in order to compete.

“We have some natural advantages, of proximity to key growth markets and a natural exportable surplus.

“The state only requires a few hundred thousand tonnes to feed itself.”

Proximity to markets plays a key role for agriculture, as it is generally cheaper to export to our near north than to Australia’s east coast, he said; and with eastern states generally able to cover their own demand, the focus was on building long-term relationships overseas.

The cooperative holds the largest share of the market in national grain exports, at around 32 per cent (see chart).

That puts it ahead of US giant Bunge, which recently entered the market in WA with an operation in Bunbury, and Mitsui and Plum Grove, which inked a deal to combine their 1 million tonnes of annual grain export capacity.

However grain producers are coming under increasing pressure from global competitors, with the state’s traditional markets, from Japan to the Middle East, facing a renewed push from countries in North America, around the Black Sea and even Brazil.

Mr Crane said despite WAfarmers’ efficiency and agronomy practices, yields were lower and production costs higher than our competitors’, mainly due to the state’s poor rainfall and soil.

One area where the state could improve, however, was by further increasing the efficiency of the grain supply chain, Mr Crane said, with more trains currently required to load a given vessel than in other producing nations.

He said the Tier 3 rail debate was a microcosm of a broader issue of ensuring long-term productive infrastructure was properly maintained; in the case of rail, the infrastructure limitations directly affects the product’s international competitiveness.

CBH has expanded further down the supply chain with its entry into the South-East Asian milling market through Interflour, of which it owns 50 per cent.

The operation has a chain of seven mills, with four in Malaysia, and the business is looking at malting for the Vietnamese brewing market.

And while oats don’t make up a large proportion of WA’s annual grain output, CBH has moved to take advantage of growing demand to recently invest in oat product manufacturer Blue Lake Milling, which has operations in South Australia and Victoria and annual capacity of 60,000 tonnes.

The Pastoralists and Graziers Association of WA policy officer Ian Randles said WA grain growers had benefited from deregulation of the industry, which had also taken place in Canada.

“Prices are better; my understanding is that the returns are better,” he said.

Mr Randles was bullish about the ability of WA growers to compete with countries such as Ukraine, where major productivity growth had occurred in the past decade.

One obvious advantage Australia had was political stability, he said, which was highly valued by major buying nations countries seeking to lock in food security.

Mr Randels said the industry would need to focus on research and development, with the biggest portion of global grains research dollars invested in maize.

One school of thought argued that this would be best done without the compulsory levy to the Grains Research & Development Corporation, he said, which is currently legislated to collect cash for, and fund, innovation in the industry.

Mr Randels advocated giving growers more control of how research spending was allocated and increasing the GRDC’s accountability to farmers.

Bankwest’s Mr Langford said the free trade agreements with China, Japan and South Korea would be good for WA agriculture, although the recent fall of the Australian dollar would be the biggest boost to competitiveness.

He said it was fortuitous that, at a time when non-rural exports were not performing well, there would be a reasonable harvest in the year ahead and a competitive currency setting. 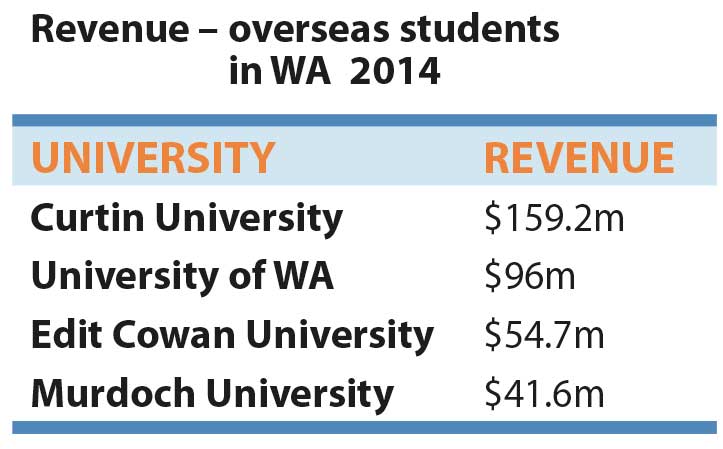 Another sector to benefit from the currency depreciation was education, according to Study in Perth executive director Mike Ryan.

“Some providers are doing much better than (they’ve) done previously… some are doing better than they were but not booming,” Mr Ryan told Business News.

“The opportunity to put forward the proposition is much better than it’s ever been, with the lower dollar … (whereas) with the dollar at parity it’s a very difficult thing to sell overseas.”

Despite growth of almost 10 per cent annually, WA’s market share is actually dropping as other states aggressively compete in the market.

Similar to tourism, revitalising the city and improving shopping hours are good drawcards, keeping in mind that students come here to be part of the community, Mr Ryan said.

Curtin University was the state’s biggest provider in terms of onshore overseas students, with $159.2 million in revenue, followed by the University of Western Australia at $96 million.

Port Hedland was once again the state’s biggest export port at around 445 million tonnes in the 2015 financial year, mostly iron ore, with salt and manganese other key commodities (see graphic).

Throughput was up around 20 per cent from the previous year, a new record.

That was down around 3 per cent from the 2014 financial year.

Next, by some substantial distance, is the largely import-oriented Fremantle Ports, with exports of 20.6mt, largely wheat, iron ore, alumina and cement clinker.

Geraldton Port, which is controlled by Mid West Ports Authority, came in at 16.3mt, mostly iron ore and then grain, almost 10 per cent lower than the year previously.

Nonetheless, tonnage has nearly doubled at the port over a four-year period, due to a ramp-up in iron ore exports.