Recent research on the recycling of building materials in Western Australia has highlighted a pressing need to help facilitate behavioural change across the state’s construction sector, which is estimated to produce more than 1.5 million tonnes of waste each year. 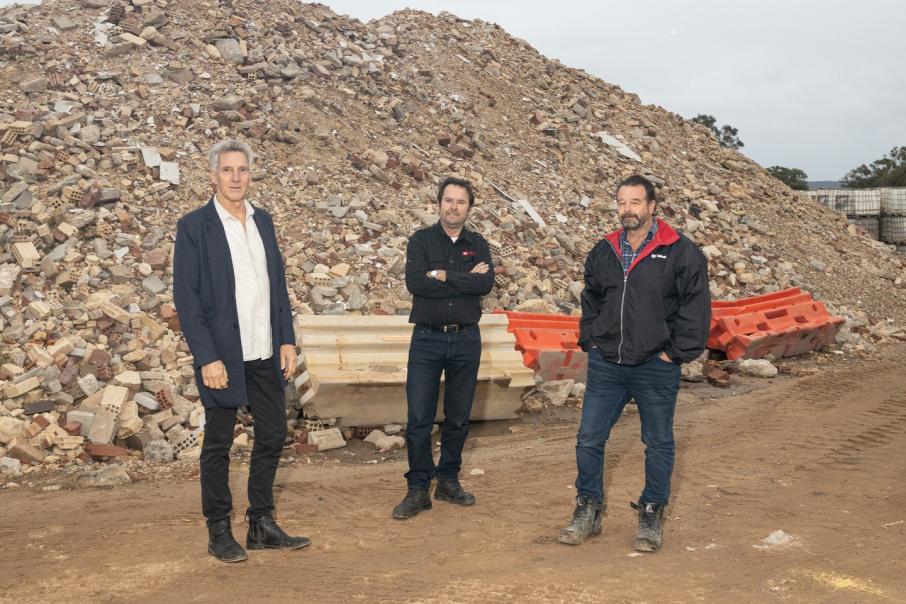 Construction waste may not be top-of-mind for many when it comes to recyclable materials, but it nonetheless represents a largely untapped opportunity for Western Australia.

Stockpiles of discarded bricks, plasterboard, timber, metal, tiles and the like sourced from building sites sit in holding yards, waiting to be repurposed.

That’s not due to a lack of willingness on behalf of industry to embrace recycling, but instead a lack of awareness.

However, three in five construction industry practitioners had ‘no’, ‘limited’, or ‘only some’ understanding of recovered or recycled materials available in WA.

The research and engagement program was led by ActiveSustainability in collaboration with Foundations Research, Earthcare Consulting and Environmental Engineering Murdoch University, supported by the state government and administered by the Waste Authority through the Community and Industry Engagement Program.

Mr Beyer said more than 70 per cent of the estimated 1.5 million tonnes of waste WA’s construction sector produced each year could potentially be re-used in fill, road base, landscaping elements and construction materials, or other fit-for-purpose applications.

“There’s a willingness to use recycled products … but there needs to be more knowledge sharing and information.

“At some point, mistrust comes in or lack of belief in the product.”

Mr Beyer said this was despite strict materials testing (like for asbestos) and processing, and that recycled constituents were typically cheaper than virgin materials.

Education, he said, was part of the solution to encouraging more take-up.

Mr Beyer said a free industry guide to assist with buying recycled construction materials was being compiled, set for release in July.

“Through the government’s waste strategy, there is legislative reform and positive procurement policy being considered, which will greatly increase the uptake of recycled waste-derived materials,” he said.

However, Mr Beyer said there already were a number of case studies where recycled materials had been re-used successfully throughout WA.

One of the companies leading the charge is Earthcare Recycling, formed in 2010, which uses an at-source separation model that deploys multi-bin systems for material types on site.

As a result, Earthcare says it has enabled past and current clients – including ABN Group, BGC, Lendlease, Cedar Woods and DevelopmentWA – to recycle more than 90 per cent of the construction and demolition waste they generate.

After collection, Earthcare then repurposes waste into a range of products such as fill sand, sub base, drainage stone, timber lengths and wooden pallets. A recent project, undertaken by its associated landscaping business, incorporated recycled building materials into almost every aspect of Stockland’s Calleya Community Garden in Treeby – paths, planters, brick planters, an arbour, herb beds and covered shelters.

While the construction industry was yet to have its ‘plastic bag moment’, Earthcare director Tim Radley and co-owner Francis Burke said increasing recycling adoption by the industry came down to the same principle of facilitating behavioural change.

“I struggle because my attitude is, what’s wrong with recycling?” Mr Burke told Business News.

“We’re the largest operator in Perth in terms of separation soils, we’ve got some of the biggest builders in town … but we’ve still got [stockpiles], like a lot of the recyclers, we haven’t left the dirt and materials there just to show you.

“We’re just trying to find markets for it.”

Mr Burke said the landfill levy, which had increased from $2 to $70 per tonne over six years, was a good start, but more state government-led initiatives (such as refining procurement models) were needed to drive adoption and tangible results.

These sentiments were reflected in the recent survey, with the majority of respondents choosing ‘state and local government to mandate recycled materials in contracts’, as measures they thought would increase the uptake of recycled materials.

Survey respondents also supported the development of fit-for-purpose standards and specifications to define uses; better and more specific information and knowledge sharing about recycling; and certification of products and suppliers.

Beyond price, Mr Burke pointed to a host of other benefits repurposing materials brought to developers, including a whole-of-development approach to waste management; opportunities for EnviroDevelopment Accreditation; cleaner and safer sites; and improved community engagement.

“There’s an appetite there …. we just need to get some easy wins as to how this material can be used,” Mr Burke said.

“And don’t be frightened (of waste).

“I think the next step on this journey is for government and industry to look at what markets are out there for this material, and market development.”