The establishment of Ron Sayers’ newest business shows the Ausdrill founder has lost none of his entrepreneurial flair but he also accepts the need for change at the large and diversified company. 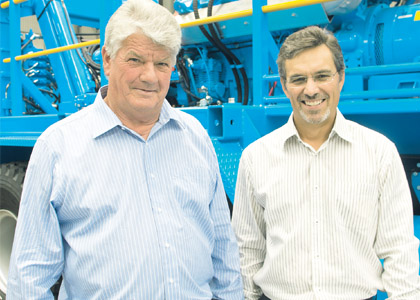 The establishment of Ron Sayers’ newest business shows the Ausdrill founder has lost none of his entrepreneurial flair but he also accepts the need for change at the large and diversified company.

WHEN Ron Sayers went to the Diggers and Dealers conference in 2010, he had been mulling over an idea for a new business.

Little did he know that in the space of one afternoon, that idea would turn into a firm business plan with two new partners.

The way in which the deal came together says a lot about Mr Sayers - a 60-year-old mining services veteran who can deal with global mining leaders but still be in touch with people in Kalgoorlie, the town where Ausdrill started 25 years ago.

Plans for the new assay business started to take shape when an Australian working for gold miner AngloGold told Mr Sayers how hard it was to get efficient assay testing for drilling crews in west Africa.

“I said I’d been thinking about starting an assay business myself so I told him I’d see what I could do,” Mr Sayers said.

Later that day, he met a local geologist and asked if he knew anybody who could help to set up the business.

“He said he knew a couple of guys, and gave me their number so I could call them when I was back in Perth,” Mr Sayers said.

“Ten minutes later he came back to our booth and he had this guy with him.”

That guy was Gary Wheeler, who had previously been at Genalysis, one of many assay labs in Perth that were bought by international and interstate businesses in a wave of takeovers last decade.

They went for a coffee and emerged soon after with plans for an assay business.

Two years and $10 million later, MinAnalytical is up and running with a state of the art assay lab in Canning Vale and ready to take on the big boys (see MinAnalytical testing major assay players).

It’s one of 18 businesses that make up Ausdrill, which has established itself as an ASX 200 company and lifted annual revenue well above $1 billion.

Despite this, it still suffers from the mistaken impression that it’s simply a drilling contractor for exploration companies.

Its core business is drill and blast services for mining companies and contract miners, with long-term clients including the Super Pit in Kalgoorlie, where it has worked for more than two decades.

Ausdrill has also built a large full-service mining business in Africa and added diversity to its business by making several acquisitions and growing new businesses.

Chief financial officer Jose Martins says 75 per cent of revenue is production related, making it almost a ‘defensive’ stock but the traditional perception is hard to shake.

“Its been suggested we change the name,” Mr Sayers says.

But he quickly dismisses the idea, referring to the honour boards in Ausdrill’s head office that list long-serving employees.

“They wouldn’t be too keen on changing the name, they don’t believe we need to,” he said.

“We need to educate the rest of the world that Ausdrill is more than just a drilling company.”

Mr Sayers is the kind of person who would rather talk to workers on the shop floor than bankers and investors on the Terrace, and he is not shy about saying so.

“I hate it,” he says, when asked about doing roadshows to meet the company’s institutional investors.

He does one roadshow a year but these days he sits in a hotel suite in Melbourne then Sydney and gets the investors and brokers to come to him.

The rest is done by Mr Martins, who spent most of his career in the city and West Perth but now commutes to Canning Vale, were the head office backs on to some of Ausdrill’s factories.

Most of Ausdrill’s growth has been through organic expansion of its existing businesses and Mr Sayers has a clear liking for that path.

“Acquisitions lead to write-offs; we’re still paying for the (2009) Brandrill acquisition,” he said. “You can buy a business and pay for goodwill or you can establish a new business and create goodwill.”

However, when the right opportunity comes along, Ausdrill has acted.

At a cost of $165 million, it was Ausdrill’s largest acquisition and the resulting accounting adjustments prove Mr Sayers’ point.

After making the accounting changes and dealing with acquisition costs, Ausdrill expects the BTP business will make a “minimal” profit contribution this year.

BTP, like most parts of Ausdrill’s business, has also been adversely affected by last year’s slowdown in mining sector spending.

“It’s not producing the numbers it was originally but ultimately it will because it’s a good business,” Mr Sayers said.

His explanation shows that he is a man with an instinctive feel for the business.

“When I walk through it, it looks good, it feels good, it is a good business,” he said.

Mr Sayers said one of the reasons he felt so positive about BTP was the cultural similarity between the two businesses.

He believes that was one reason the vendors, the Murphy family, chose Ausdrill as he buyer over competing offers from private equity funds.

Mr Sayers said the ability of all the Ausdrill businesses to work together and learn from each other was one ingredient in their success.

“With BTP, the first thing we did was send the guys to Africa; they came back with hundreds of ideas,” he said.

Mr Martins said the focus for now was on bedding down the BTP acquisition and achieving some of the potential synergies.

“Until we can demonstrate that we can digest that properly and create value, people won’t believe that we can do another one, so it’s only logical that we should take a pause and grow the business that we’ve got,” he said.

Ausdrill has invested heavily in its established businesses, in order to lift their performance.

In fact, Mr Martins estimates the company has spent more than $1 billion on capital investment over the past six or seven years

The company’s big investment budget is apparent on a tour of its manufacturing workshops across Perth.

Drilling Tools Australia, for instance, has what Mr Sayers calls “the most automated machine shop in the country”.

It pioneered the use of Japanese robotics in Australia and was followed by neighbouring Ausdrill business Remet Engineers, which produces drill rods.

Having made such a big investment in ‘multitasking’ technology, both workshops can turn out their precision products 24 hours a day, seven days a week.

Another business that Ausdrill has invested in is former Brandrill subsidiary DT Australia, which manufactures its own patented trays for dump trucks.

The Hercules is promoted as “lightweight, heavy duty” tray and the company is slowly but surely winning more clients, primarily in Australia but also in Africa.

Discussing these businesses, Mr Sayers clearly sees them as more than just a division of the holding company.

“What I get out of this company is pride,” he says.

Married with that is a keen interest in the 5,000 people who work for Ausdrill across eight countries.

One of its notable initiatives is a staff giving scheme, matched by the company, in which nearly all staff participate; the collected money is used to provide financial assistance when employees and their families are in need.

Another is its sponsorship of the V8 supercars, which enables Ausdrill to send two apprentices to each race meet, where they can spend time in the pits with the racing crews.

“When they come out, they walk a bit taller,” Mr Sayers said.

While Ausdrill has moved way beyond its early days as a family company, it still has a preference for the siblings and children of current staff members.

Mr Sayers says that makes it easier to maintain the culture of the business, and he adds, half-jok-ingly: “If you have a problem with someone, you send their aunty or uncle over to talk to them.”

A mantra he repeats is the need to have the right people running each of the businesses.

“All the equipment in the world is no good if you don’t have the right people,” he said.

That philosophy was amply illustrated by Ausdrill’s decision to invest in Energy Drilling, a new business that is targeting the coal seam gas industry in Queensland.

“That is different from anything else we have done,” he said.

Mr Sayers lured a former long-term Ausdrill employee named Peter Wright back from Chile to run the new business and got him to spend six months in Canada to learn the ropes.

Energy Drilling currently has three rigs, with each costing $10 million, and Mr Sayers said “already we’re up there with the best drillers”.

“Everything we do, we do it pretty well, and that’s because they all learn off each other,” he said.

With a view to achieving orderly succession, Ausdrill announced to the market last year Mr Sayers would be retiring as managing director in June 2014.

“The IT department has wired up my computer so that it counts down the days,” he said.

Mr Sayers has a horse-breeding business with 23 staff, Yarradale Stud, and relishes the opportunity to get more involved in that.

But he also notes that he retired as managing director in 1997, only to return three years later when the company got into financial strife.

That was around the time of the ‘dot com’ boom, when commodity prices were low, investors had no interest in mining stocks and Ausdrill had made an ill-fated foray into Latin America.

“I didn’t talk to the institutions for seven years because it took that long to dig ourselves out of a hole,” he said.

On a more serious note, Mr Sayers also faces the prospect of protracted legal action, after he and business associate Peter Bartlett were charged with tax fraud over events that occurred 10 years ago. Ausdrill’s board, led by long-serving chairman Terry O’Connor and including former Leighton boss Wal King, said it remained fully supportive of Mr Sayers, who intended to “vigorously defend” the charge.