The upcoming float of livestock exporter Wellard is set to be the fifth biggest in Western Australia’s history, and will also stretch the market lead of investment bank UBS, according to research by Business News. 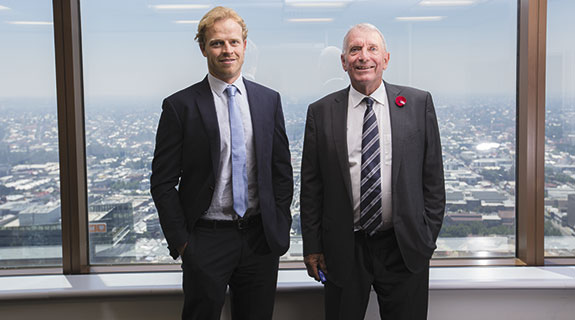 DEALERS: Tim Day (left) and Neil Hamilton have been part of UBS’s permanent presence in Perth since 2010. Photo: Attila Csaszar

The upcoming float of livestock exporter Wellard Group is set to be the fifth biggest in Western Australia’s history, and will also stretch the market lead of investment bank UBS, according to research by Business News.

Wellard is aiming to raise up to $403 million through its initial public offering, according to promotional material released this month by lead managers UBS and Deutsche Bank.

That total is trumped by only four other WA IPOs.

Business News has identified a total of 12 WA IPOs that have raised in excess of $100 million; Wellard would be the 13th (see table).

UBS was lead manager on seven of these deals, including most of the big deals.

That puts it well ahead of other international investment banks targeting the WA market.

UBS, along with Citi and Credit Suisse, was joint lead manager of the state’s largest IPO – the $941 million raising by mining equipment supplier Emeco Holdings ahead of its ASX listing in 2006.

The privatisation of state government business enterprises has been a significant contributor to the deal flow.

Richard Court’s government got the ball rolling in 1994 when it floated SGIO in a $165 million deal, followed two years later when the Bankwest IPO raised $450 million.

The third big privatisation was AlintaGas, which raised $202 million through its public share offer in 2000.

The heyday of big IPOs was the mid 2000’s, before the GFC killed investor appetite.

The global investment banks, led by UBS, handled nearly all of the big listings during this period.

UBS has had a permanent presence in Perth since 2010, when it recruited company director Neil Hamilton as senior adviser and transferred Tim Day as head of office.

Prior to that, it had a Perth presence in 2007 and 2008 when Richard Saywell was based in the local office. Otherwise, it previously serviced Perth on a fly-in basis.

Mr Day believes there are several contributors to the firm’s success.

“That gives the firm strong distribution.

“The other really important factor is track record.

“People look at firms that have a history of picking the right companies and the right management teams and helping them grow.”

That puts it below Macquarie Capital, which has seven corporate finance staff in WA according to the BNiQ database compiled by Business News, but similar to other global investment banks such as Lazard and Merrill Lynch.

Like other big banking groups, UBS draws expertise from the east coast to supplement its local team.

This year is shaping to the biggest for WA IPOs since 2007.

Wellard is due to lodge its prospectus this month, for a raising of between $333 million and $403 million.

AFG originally planned to float in 2007, but was caught by the market downturn at that time, and bided its time for eight years before returning.

The likely completion of two big IPOs this year disguises the general weakness in equities markets, with the number of WA IPOs expected to be less than 10.

The preferred option for most small companies looking to list is a backdoor listing though cash-strapped exploration companies.