While WA’s tourism industry has steadily recovered in the past year, industry and business leaders continue to debate the best way forward. 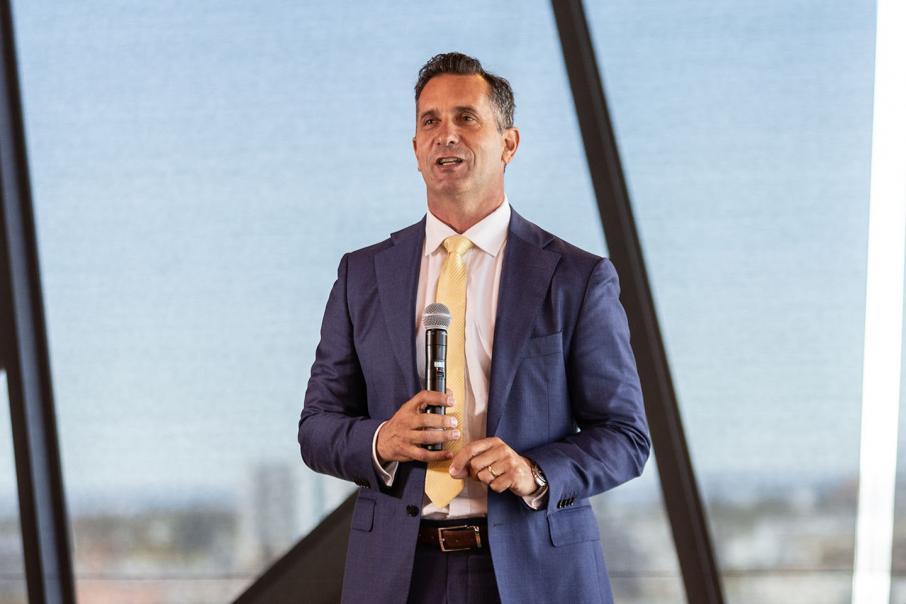 While WA’s tourism industry has steadily recovered in the past year, industry and business leaders continue to debate the best way forward.

Tourism Minister Paul Papalia has made marketing campaigns the cornerstone of his strategy, insisting that his political predecessors in the Barnett government were asleep at the wheel.

Until 2017, a focus on infrastructure with little in the way of marketing to attract visitors to Western Australia had left the state with expensive and unfilled hotel rooms, he said.

That’s why marketing had become a priority during his tenure.

Mr Papalia said a key focus had been to grow awareness of WA as a genuine tourist destination rather than just a place for business.

“We identified that we had to let other states know that we’d changed,” he said.

“We accrued a bad reputation during the boom as being expensive. Anyone who came … they were paying enormous prices and not getting great service.

“We needed to change our reputation.”

During the past year, the government has spent millions to reverse that perception, with the ‘Hotel Perth’ campaign launched in 2018 aimed at growing the state’s hotel occupancy rate.

The development of WA’s leisure tourism market has not gone unnoticed, with Rob Weeden, general manager of Pan Pacific Perth, ranked second on BNiQ’s hotels list, telling Business News the increased capacity has helped drive consistent results for hotels in the past year.

“[During the boom] overseas operators wouldn’t invest in WA because you could only take their business during the off-season,” he said.

“[This was] because when it was peak season, you’d be taking corporate or convention business.

“Demand in WA is increasing, the only challenge is that it’s not increasing at the same rate as supply, but it will catch it very quickly.”

Drawn from Tourism Research Australia’s national and international visitor surveys, those figures were touted by the state government as showing the effectiveness of its marketing campaigns and events calendar.

However, while interstate visits grew to 1.7 million, international visits remained stagnant at 950,000, a slight decrease on the previous year. 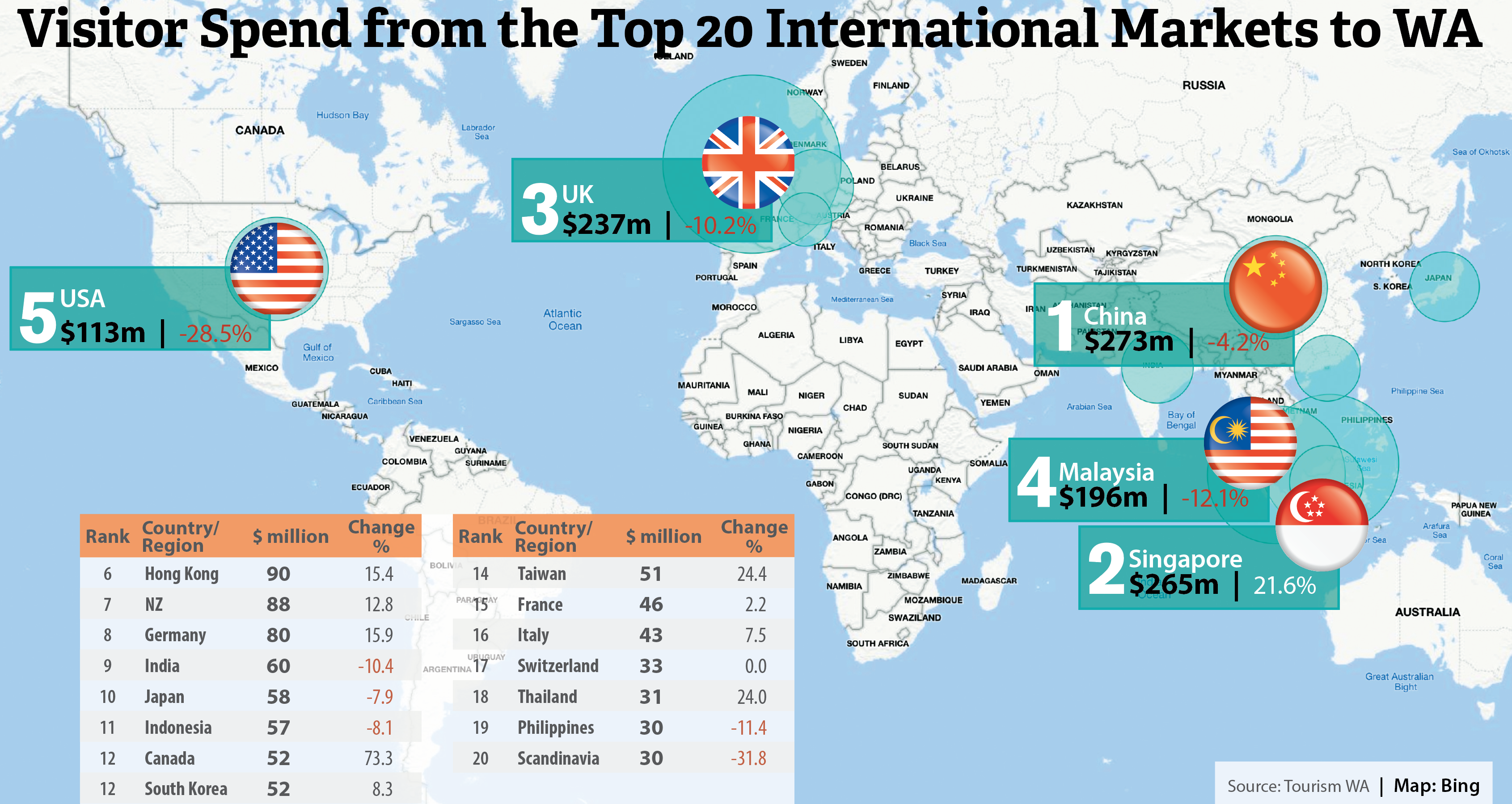 It’s those figures that have led some in the sector to question whether the industry is recovering as well as the government claims.

Tourism Council of WA chief executive Evan Hall has in the past questioned how the government is representing its tourism figures.

That was apparent in June, when Mr Papalia presented findings from Tourism Research Australia that showed the creation of 2,000 tourism-related jobs in 2017-18.

Mr Hall pointed out that, at 1.8 per cent, the rate of growth was far behind the national rate of 5.3 per cent.

“The state government should aim to grow tourism jobs at the same rate as the rest of Australia and commit to a target of 6,000 new tourism jobs per annum.”

“Behind the hoopla of continued record growth in Australian tourism, pockets of our country are not feeling the full benefit or glow,” he said.

With international tourists spending $143 billion in Australia in the year to March 2019, Mr Hall told Business News it was disappointing to see WA lag the nation in attracting overseas visitors.

“We should have done a lot better … when we had all the hotel rooms being developed,” Mr Hall said.

“We have a very compelling Australian dollar and international travel moving to Australia, and WA was not a part of it.

“It’s our market share that’s suffered over that period.”

Mr Papalia told Business News the government had already started marketing WA internationally as Australia’s western gateway, citing $12 million in the 2019-20 budget to go towards promoting WA as a tourist destination for nearby Asian markets.

That includes a three-year, $5 million deal between Singapore Airlines and Tourism WA announced in July aimed at boosting visitors to WA from Singapore, Malaysia, Indonesia and Hong Kong.

While Mr Hall said he appreciated the government’s international marketing campaigns, he argued more funding was not enough for the sector.

In his view, one of the reasons Perth had been underperforming with international visitors was because insufficient attention was being paid to the development of unique visitor attractions, with the burden of regulation leaving many private operators unwilling to pursue novel ideas in Perth.

“There’s not a single government agency that can say, ‘yes, you can do this’,” Mr Hall said.

“Of all these government agencies they have to get through, all of them can say no and none of them have a reason to say yes.”

Shadow Tourism Minister Alyssa Hayden agreed, telling Business News that private operators looking to build new attractions in WA were not being given enough support by the government or the relevant departments.

“If we want to have exciting new attractions in WA, we have to have a serious focus on making sure we stand with the operators and their ideas, and work on how we can get it through all the departments,” Ms Hayden said.

For its part, the state government and Tourism WA have already heeded these concerns, in May announcing a tourism case management framework aimed at assisting private operators through the approvals process.

At the launch of that initiative, Mr Papalia said the framework would ensure projects were not encumbered by unnecessary bureaucratic delays.

“It’s not about getting rid of approval processes or cutting corners,” he said.

“It’s about ensuring proponents get an outcome in a reasonable timeframe.”

One of the most notable critics of the state government’s tourism regulations is Mack McCormack, founder and director of Saferight.

Having struggled for years to build attractions of significance in WA, Mr McCormack has in the past pursued contracts to install a ‘zip line’ or controlled jump at Brookfield Place, as well as set up helicopters from floating pontoons in the Swan River.

Mr McCormack said he had come up against arduous approval processes throughout the years, such as when he pursued the idea for Swan River Seaplanes.

While acknowledging the need for regulation, he argued that the system in its current format was too complicated for business people, and that the standards for seeking approvals did not align with those set by other states.

“Swan River Trust’s idea of interacting with the river is to get on a bike and ride around the outside of the river and don’t touch it,” Mr McCormack said.

“Meanwhile, you go to Sydney, and the harbour is alive, and it’s fantastic for tourism.”

“Part of our [industry’s] long-term future is these compelling experiences, which we’re great at when we’re allowed to,” he said.

Mr Papalia rejected the idea the government’s process for approvals was overly bureaucratic, citing the state government’s role in investing in Rottnest Island.

“There had been no major infrastructure projects on that island in 30 years,” he said.

“I said to the authority, ‘I don’t want things languishing, if the proposals are there, give them an answer’.

“My view was that was government, not bureaucracy.”

Asked whether the government should prioritise regulatory issues to grow the tourism industry, Mr Papalia said WA already delivered unique experiences for visitors, and that the focus had to be on marketing them appropriately.

“I think we’re doing everything we can possibly do at the moment,” he said.

“We’re changing the perception of a big space with small numbers of people [from a bad thing] into a good thing.

“Undeniably, we’ve made tourism a subject that everyone’s got an opinion about, and three years ago that was not the case.”