Salaries for newly-appointed chief executives at WA-listed companies were down by 20 per cent from the levels prevailing last year, research by Business News has found. Click through to see salary packages for 77 WA chief executives. 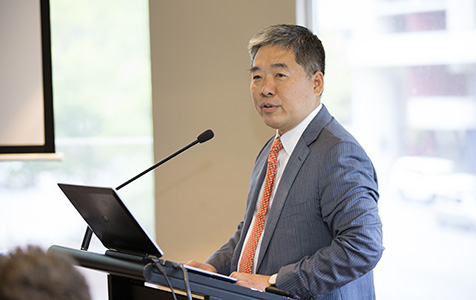 Salaries for newly appointed chief executives at WA-listed companies were down by 20 per cent from the levels prevailing last year, research by Business News has found.

What a difference a year makes.

In April last year, iron ore hopeful IMX Resources appointed Gary Sutherland as its chief executive, on a base salary of $475,000.

Since then, the company has shifted its focus to graphite in Tanzania, and also has a new chief executive in Phil Hoskins, whose base salary is $220,000.

Copper miner Aditya Birla Minerals is another Western Australian company that illustrates the changed conditions in the jobs market.

Aditya’s new chief executive, Neela Patnaik, is on a salary package, including vehicle and housing allowances, of $490,200.

Nine WA-listed companies have announced new chief executive salary packages over the past three months, with the average base salary being $267,244. The latest salary survey by Business News also highlights the continued trend towards cutting the salaries of existing chief executives, though the magnitude of these cuts is highly variable.

The salary reductions have usually been introduced in tandem with other cost-cutting measures, with many companies also reducing the number of directors on their board.

For established chief executives, a salary cut can be a good outcome, compared to others that have lost their job.

Construction contractor Resource Development Group and mining contractor Macmahon Holdings have both decided they can manage without a chief executive for now, after the incumbents resigned.

At RDG, executive director Andrew Ellison has assumed the role of managing director, after joining the group last year through its takeover of his Centrals business.

Like most contractors, he presides over a shrinking business – RDG’s staff numbers peaked at 895 last year but stood at 525 at the end of February.

It’s a similar story at Macmahon, which had 2,097 staff at the end of last year and will lose more after being told that its contract at Fortescue Metals Group’s Christmas Creek mine would be terminated next month.

Chairman Jim Walker has taken the executive reins on a temporary basis, and despite the added workload has continued with his annual director’s fee of $198,000.

By comparison, former chief executive Ross Carroll was on a base salary of $1.1 million.

Mr Walker has been telling the doubters that Macmahon has been operating for 50 years, and had ridden out tough times previously.

“Mining is cyclical and it is important to remember that, over the company’s long history, Macmahon has successfully adapted to changing market conditions through many cycles,” Mr Walker said.

VDM Group has been much more restrained in its cost cutting, even though it appears to have suffered an even-sharper slowdown in its business.

The engineering and construction contractor reported revenue of just $826,000 in the half year to December, down from $20 million in the previous corresponding period.

The company said it had not won any new contracts in its established business as it sought to build new equipment hire, trading and mining operations.

Managing director and major shareholder Dongyi Hua has accepted an 18 per cent salary cut, to $515,000, and other directors have accepted similar reductions.

Iron ore companies such as Atlas Iron, BC Iron and Sundance Resources have announced cuts to directors’ fees, along with reductions in the number of directors on their boards.

Brazil-focused Centaurus Metals joined the cost cutting this month, announcing that chief executive Darren Gordon has agreed to cut his remuneration by 10 per cent while other directors have agreed to a 33 per cent reduction in their fees.

Other companies have been forced to go further.

New Standard Energy, which has just four staff after a redundancy program, has suspended all directors’ fees until market conditions improve, while chief executive Phil Thick has agreed to a 50 per cent salary cut.

“The speed and intensity of the collapse in global oil prices has affected companies large and small and across all jurisdictions,” Mr Thick said.

“We have to continue to be responsive to these market forces.”

At Wild Acre Metals, the directors have agreed to accept shares in lieu of cash, while Peninsula Mines’ executive director Martin Pyle plans to take share options rather than cash.