More than 40 years in the making, the Ocean Reef Marina development is progressing, but it may yet have choppy waters to navigate. 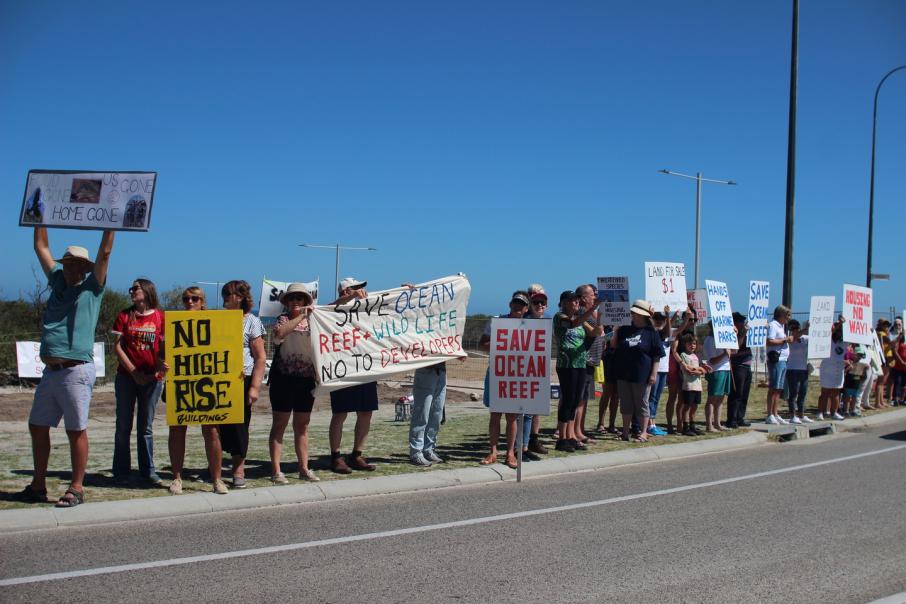 Marina projects across Western Australia have a history of making waves in their local communities.

During the 1980s, protestors lay down in front of bulldozers in an attempt to halt early site works for Hillarys Boat Harbour.

While demonstrations at the site for the proposed Ocean Reef Marina have been less confrontational, the project has faced some backlash.

The concept was first proposed in the 1970s, but the project only seriously came into play after the McGowan government committed $126.5 million in funding for the life of the project in 2017.

That investment provided the momentum needed to get the project off the ground, with the concept plans for the development cycling through several iterations before its current form: a 550-boat pen marina featuring a residential component as well as approximately 12,000 square metres of retail and commercial space, a dedicated marine enterprise precinct, new community club facilities and a coastal pool.

Since receiving the initial environmental green light in 2019 and subsequent construction approval from the City of Joondalup, the state’s land agency, DevelopmentWA, has cleared a significant area of bushland in preparation for the onshore components of the marina’s northern breakwater. But with substantial demolition work likely to follow in the coming months, tensions have heightened.

Projects of this nature and scale require significant backing, from all levels of government and the wider community.

For most property developments, finding a balance between delivering economic benefit and keeping residents happy is fraught. DevelopmentWA estimates the project will support more than 8,600 construction jobs, as well as create an additional 900 ongoing jobs once completed.

Those numbers have ensured there is plenty of support for the plan. In 2009, 94 per cent of the 11,000 responses received during a round of public consultation backed the project. But not everyone is on board.

Community activist group Save Ocean Reef argues there has been a lack of community consultation regarding a change to the 2009 concept plan, including an increase in the overall scale of the development.

Planning authority documentation, produced for a meeting last year, noted that public consultation had not been undertaken because the new plan was considered to be consistent with the overall planning for the area, and that proposed works aligned with previous concept plans.

DevelopmentWA said it had held additional community consultation initiatives in relation to a refined concept plan, including more than 2,100 people attending an open day in 2018. However, an updated figure for those in support of the revised concept plans was not provided.

According to the recently released business plan for the disposal of the city’s land to the state government, it could be more than 30 years before the capital expenditure is recovered, excluding the $5.5 million the city has invested to date. But the City of Joondalup says the project simply needs to be financially sustainable in the long term and deemed the 34-year timeframe “acceptable”.

Overall, the state government anticipates the project will attract more than $650 million in private sector investment to the area, including via the development of land and new residential dwellings, which could simultaneously help to satisfy planning infill targets.

An additional revenue stream is expected to come from the marina’s boat pens. DevelopmentWA chief executive Frank Marra told Business News the organisation was now refining the marina operating model with the Department of Transport, which, when complete, would include a forecast for boat pen revenue.

But Mindarie Marina owner David Mack has expressed concern over the maintenance cost of boat pens that will be required at Ocean Reef’s earmarked site, as well as the appetite for boat pens.

Although the population of the local government area has more than doubled in the past 15 years, the pens at Mindarie Marina, just 11 kilometres north of Ocean Reef, have yet to reach 85 per cent occupancy.

Mr Mack said it was astonishing that a marina was being built between Hillarys and Mindarie.

“We’ve never been full; not since we finished developing the pens in 2003.” Mr Mack said the Mindarie Marina had approval to add about 60 more pens but had chosen not to do so because of a lack of demand.

But Mr Marra said the construction of pens at Ocean Reef Marina would be staged, based on market demand.

“As is the case with long-term projects such as Ocean Reef Marina, it is not envisaged that all of the boating facilities will be developed immediately,” he said.

“Like most other marinas, it is anticipated development will occur progressively over time in response to demand and the needs of the community.

“Hillarys Boat Harbour reached maturity 30 years after construction began whilst Fremantle Fishing Boat Harbour has been in existence since the 1960s and continues to evolve in response to the needs of the community.”

The primary driver of community opposition to the project is its potential environmental impact.

The proposal requires the clearing of almost 25 hectares of vegetation (home to flora and fauna species), a partial amendment to the boundary of the protected Marmion Marine Park, and the relocation of more than 100,000 Roe’s abalone (the largest relocation effort undertaken in Australia). DevelopmentWA employed environmental consultants to trap and relocate animals before site works began in August last year.

The Save Ocean Reef group had a small victory earlier this year, with Environment Minister Stephen Dawson applying extra conditions to DevelopmentWA’s clearing permit after 279 residents filed appeals arguing it did not go far enough to protect flora and fauna at the site.

In recent weeks, Save Ocean Reef members have argued that the most recent Ocean Reef business plan should have been reviewed and approved by ratepayers prior to clearing works in August 2020.

However, City of Joondalup mayor Albert Jacob said it was not necessary for the city to complete the business plan prior to clearing works beginning at the site, as DevelopmentWA had already obtained the necessary permits.

Mr Jacobs said the city granted an access licence to DevelopmentWA for the clearing to start on city-owned and managed land, but that did not imply that the city had agreed to transfer the land to the state government, which can only be agreed to following council approval.

The state’s fishing industry has also noted the potential impact of the development on the site’s four-kilometre section of reef, a thriving habitat for Roe’s abalone.

Australian Reef Wild Abalone owner David Sutcliffe, who has been working in the abalone industry for more than three decades, said Ocean Reef’s abalone was among the most sought after of any in the country.

Commercial abalone divers retrieve almost 16 tonnes of abalone from the reef each year. The Department of Primary Industries and Regional Development has been working closely with industry, including the West Coast Abalone Divers Association, and has been undertaking the largest abalone relocation effort in the nation’s history for the better part of a year.

But Mr Sutcliffe said he believed it was likely that only 30 per cent of the abalone would be able to be relocated.

“I think it’s devastating that recreational divers and commercial divers will lose these areas, one of the most prolific reefs in our state,” he said.

“That environment has been evolving over thousands of years and we may be relocating these abalone, but they won’t thrive elsewhere like they have here.”

The state’s indigenous heritage assessment has also been a subject of contention, with the Save Ocean Reef group claiming the discovery of gnamma holes on a limestone ridge in the clearance area in November last year.

Association member and micropaleontologist Marjorie Anthorpe allegedly discovered tools to the north of and within the development site and, last month, a local traditional landowner uncovered a flat stone believed to have been used for cleaning kangaroo hides.

However, Aboriginal Affairs Minister Ben Wyatt responded by publicly stating that he believed the move to be politically motivated, confirming the state would continue with clearing at the site.

Mr Wyatt said the state government had undertaken extensive work to identify the presence of any Aboriginal heritage sites, with consultation with Aboriginal stakeholders confirming no further approvals were required from state or federal authorities.

The Save Ocean Reef group had turned to the federal government to raise concerns and halt the works, but Business News understands that plea was unsuccessful.

Attention has now turned to work on the two marina breakwaters that stretch two kilometres, with each breakwater up to 18.5 metres high from the ocean floor.

Water Corporation manages the discharge of treated wastewater from Perth’s northern suburbs (the Beenyup Water Resource Recovery Facility) through an ocean outfall in the vicinity of the proposed development, discharged more than two kilometres offshore.

About 650,000t of limestone and 300,000t of granite will be delivered to the site from early March, with construction of the new breakwaters and removal of the site’s existing breakwaters expected to take up 18 months.

Potential issues have been flagged in relation to the vibrational impacts on two existing outfall pipelines, both more than 30 years old.

In response to Business News’s enquiries, Water Corporation said the outfall was in good condition and less than halfway through its 100-year design life.

It added it was proactively working to ensure the continued safe operation of the ocean outfall and that it maintained a rigorous asset protection program.