Time to buy back the mine

Opportunistic local players are stepping up as foreign miners take their leave. 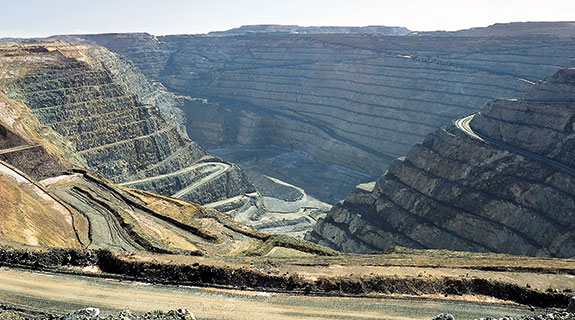 CLOSE CALL: Kalgoorlie’s Superpit is expected to produce 590,000oz of gold this year at an all-in sustaining cost of $1,098/oz.

Opportunistic local players are stepping up as foreign miners take their leave.

The old saying about ‘buying back the farm’ has new meaning for local goldminers, with international companies continuing exit from Western Australia creating opportunities to do what Northern Star Resources has done ­– become a $1 billion business ‘buying back the mine’.

Two big mines on a recently compiled ‘for sale’ list published by the investment bank Goldman Sachs are the Kalgoorlie Superpit, jointly owned by Canada’s Barrick Gold and Newmont Mining of the US, and Newmont’s Boddington mine.

Three other Australian goldmines, two in NSW and one in the Northern Territory, are also on the Goldman Sachs list of mines potentially for sale – Lake Cowal and Peak in NSW, and the Tanami mine in the NT. Barrick owns Lake Cowal, while Canada’s New Gold owns Peak, and Newmont owns the Tanami mine.

Not on the Goldman Sachs list, but also believed to be for sale, are the local assets of the Egyptian-controlled La Mancha Resources, including the Frog’s Leg and White Foil projects, which have attracted the eye of Sydney-based Evolution Mining.

If all of the overseas owned mines are offloaded to Australia-based companies it will continue a trend that started 16 months years ago, when Northern Star bought the Plutonic mine from Barrick in a $25 million transaction.

That deal launched Northern Star on a buying binge during which it secured a series of internationally owned mines, including Kanowna Belle, Jundee and Kundana, and a more recent attempt to buy the mothballed Central Tanami project.

The effect of the rapid expansion has turned Northern Star into a market darling, with the stock soaring from about 5 cents five years ago to around $2.26 today, a rise that has lifted it stock out of the ranks of penny dreadfuls to the status of a $1.33 billion company.

Other local goldminers will be keen to mimic Northern Star, which is benefiting more from the falling Australian dollar than it is from the price of gold, as traded in US dollars.

The Plutonic deal is an example of the currency effect on gold values. When it was announced on December 23 2013, the gold price was $US1,199 an ounce and the Australian dollar was US89.45, producing a local gold price of $A1,340/oz.

Currency is one factor attracting locals to the gold industry because gold itself is a perfect hedge for the declining value of the Australian dollar.

On the other side of the coin is a rush by international resources companies to quit Australia, thanks to a desire to offload non-core assets as well as trimming exposure to a country with a falling currency.

“Gearing levels have risen significantly over the past two years and we believe the majors will increasingly see reducing this as a priority,” the bank said.

The low Australian dollar and low oil prices are helping create an ideal time for the overseas exodus, because their Australian mines are generating more free cash flow than they were 12 months ago.

For local miners the situation is ready made to create a much bigger business, with the added appeal of adding top-quality assets to their existing high-cost operations.

Goldman Sachs said the emerging asset sales could be a way for Australian junior miners to reduce group cash costs as well as achieve greater diversification and lower operational risk.

Some of the mines on the Goldman Sachs list are world class in terms of production and reserves, though there costs per ounce in US dollars are not.

Kalgoorlie’s Superpit, for example, is expected to produce 590,000oz of gold this year at an all-in sustaining cost of $1,098/oz, uncomfortably close to the current US dollar gold price. The mine has an expected life of 12.5 years.

Likely local buyers, according to Goldman Sachs, are the serial acquirer Northern Star, Evolution (which is already moving on Ls Mancha), Regis, and New Zealand-focused OceanaGold.

PERSONAL issues are not supposed to affect business decisions but it’s hard to not think that some of the latest events in Australian business are being influenced in some way by personality clashes.

The legal standoff between the Chinese-owned Sino Iron project and Clive Palmer is one example of a business dispute showing the hallmarks of a disagreement which has more to do with the people involved than the terms of a deal.

There also seems to be a touch of payback in the way BHP Billiton and Rio Tinto are expanding their iron ore mines at a pace that is crushing the life out of smaller local miners, especially Fortescue Metals Group, which annoyed the big producers through demands for access to their rail and port systems.

And there’s the reaction of senior staff at the Australian Competition and Consumer Commission over the thought bubble of Fortescue boss Andrew Forrest, in which he floated the idea of an industry-wide production cutback.

There’s no doubt that Mr Forrest was sailing close to the wind, but there’s also no doubt that the ACCC was delighted to find a fresh way to attack the Fortescue founder, after failing with past efforts to convict him of saying the wrong thing.

NO-ONE needs to be told that business conditions in WA are flat and could get flatter, but that’s just what analysts at the investment bank Morgan Stanley did last week with a pessimistic report on the state’s building industry.

The bank is expecting a fall in new home starts from 29,000 a year to the long-term average of 20,000, thanks to slower population growth and rising rental vacancies.

One effect of the forecast slowdown could be a move by Boral to reverse a decision made 12 months ago to expand capacity at its Midland Brick operations.