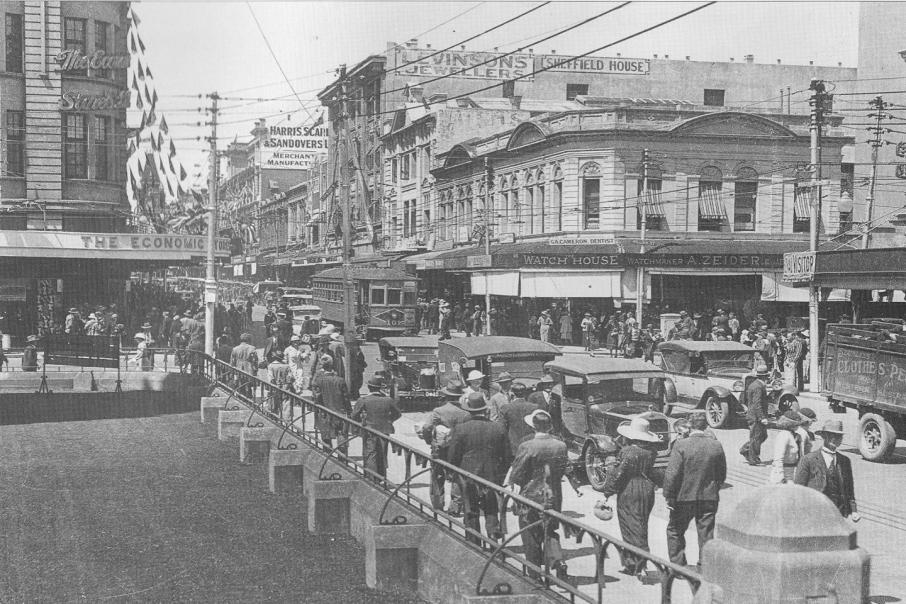 Images of Perth in 1937, when a tram line ran through Hay Street

Perth is beautiful; it's a great city, voted sixth in The Economist Intelligence Unit's Global Livability Index for 2021.

Despite this, there’s a lingering sense of unease and increasing disappointment with our city centre.

It’s not just because of the pandemic; the decline has been evident for years.

There have been various successes from Optus Stadium, Matagarup Bridge and Elizabeth Quay, through to investment in hotels and apartments.

However, “for lease” signs are continuing to go up, homelessness is increasing, violent crime is rampant and areas of the city are suffering decay.

We must ask ourselves, 'What’s wrong? Why aren’t we thriving? What are the core issues causing the city centre to decline?'

They create its culture, bring vibrancy and a community.

Without people, a city is no longer a city.

It's a ghost town, a ruin or an abandoned settlement, which Perth resembles on a weekday night.

When a city goes wrong, shops are vacant, people sleep on the street and violence rears its ugly head.

Whether it be from home to work, or from work to entertainment, friends, shopping and exploring.

We as people are always on the move, pandemic permitting.

So, when we wonder why our city centre isn't thriving, one of the key factors is the movement of people.

With the Swan River, Kings Park and freeways, is it any wonder people find it hard to get in and out of the city?

Perth used to solve this problem quite effectively with an extensive light rail network.

The initial Perth Electric Tramways started service in 1899 on a route along Hay Street, from East Perth near the WACA to Thomas Street in West Perth.

The city evolved around this link; lines were constructed and neighbourhoods grew in Nedlands, Subiaco, Victoria Park, Leederville, Inglewood, South Perth, North Perth and as far out as Wembley and Osborne Park.

When buses replaced trams in 1948, 50 years of expansion began to cease.

WA's planners began considering road transport as the way of the future and, after 10 years of rail replacement, the last tram ran in Perth in July, 1958.

Since then, we’ve continued down that road.

Transperth replicates these routes with a fleet of buses and the city is serviced by the network of CAT buses.

The issue here is that CAT buses don't move people into or out of the city, only around the CBD.

This is a function of the flawed funding model which sees the service paid for uniquely by the City of Perth through the Perth Parking Levy.

Letting trams disappear from Perth’s streets was an unfortunate error.

They’re more expensive to build because they're constructed along busy city streets.

However, in the long run, they operate with lower costs, offer higher speeds, reduce pollution and attract drivers to public transport more than any other mode of public transport.

In some cases, patronage has risen by 30 per cent with car use dropping by 19 per cent.

People won’t leave their cars at home until there is efficient, reliable alternative in place.

We’re embracing the bicycle in Perth and now light rail provides the next alternative.

No other form of public transport provides smooth, quiet travel without lurching around corners, allows people to sit spaciously, and runs so frequently that a timetable is hardly neccessary.

Trackless trams have been suggested; however, land value capture is not achieved in the same capacity, because developers aren’t attracted to the unfixed nature of a trackless tram.

The fixed lines of light rail provide the permanency needed to attract investment.

They will spur new development and regeneration across the city.

Usually, this is not factored into the numbers and can be underestimated when making the case for trackless trams.

Historically, the benefit of light rail can be seen in the high street development that followed the tram lines.

It will again if reintroduced.

What areas of the city could be regenerated?

It’s an incredible opportunity, something buses and trackless trams can never provide.

Our state government is to be commended for extending the urban rail network, which will support the CBD by connecting more people to public transport that feeds directly into the city centre.

Most other major cities in Australia now either have light rail with expanding lines or are planning on putting additional lines into the network.

Melbourne, Adelaide, Canberra, Newcastle, Sydney and the Gold Coast all have well patronised, high functioning light rail, with Brisbane at the final planning stages for its first tram lines leading up to the Olympic Games in 2032.

Why do our leaders in Perth feel that, somehow, our urban transportation needs are different from other cities? That somehow, light rail, which has worked all over the world and in our own country, just won’t work here?

The time for debate has passed. The consensus has been established and that data has proven the point.

Metronet Stage 2 must include light rail for Perth.

It’s time for Perth to thrive.

Andrew Toulalan is a candidate in the City of Perth's upcoming council election. All candidates for council are invited to write an opinion piece for this website. Their articles have run as they were originally written, though Business News reserves the right to edit for legal reasons.