Surface mining finally shows its worth 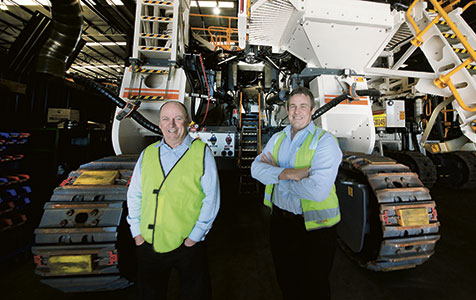 ON TOP: Mark Shelton (left) and Peter Blackburn with their $6 million Wirtgen 4200 surface miner, which can mine up to 3,000t/hour. Photo: Bohdan Warchomij

Peter Blackburn had to dig deep to turn his 'great idea' into a successful business.

Anyone who's ever had a great business idea but struggled to market it could probably relate to Peter Blackburn's story.

As the son of the managing director of Hotmix, an asphalt and bitumen paving company, Mr Blackburn grew up around the machinery used for improving roads.

At the start of his career, he worked as an operator and mechanic on the surface machines used to profile the ground, creating his own business, WA Profiling, in 2004.

It wasn't long until he began to wonder whether the 29-tonne machines he was working with might be capable of more than road profiling.

In 2005, Fortescue Metals Group approached Mr Blackburn to overhaul one of its old machines, which ran over the ground in a manner similar to a combine harvester, enabling it to carefully mine thin seams of ore.

"They had never seen that before. They were just blown away that there was a machine that could take up the crushing, the drilling, and the loading all in one pass," Mr Blackburn told Business News.

Convinced surface machines were a more efficient way to conduct open-cut mining, he bought his own 205-tonne 2500 model from German manufacturer Wirtgen.

Wirtgen surface machines have been popular in open-cut mines around the world for some time – especially in Estonia for mining oil shale and in India for mining coal – but when Mr Blackburn bought his first $3.5 million machine in 2006 it was the only one of its kind in Australia.

Within a few years Mr Blackburn had trialled Wirtgen machines in Australian coal, bauxite, iron ore, nickel, salt, uranium and limestone mines. So positive were the results that 60 per cent of companies that viewed the trials bought their own machines.

Unfortunately, Mr Blackburn wasn't working on a commission basis and didn't profit when a mine bought a Wirtgen.

He had more success when contracting out several machines and services to BHP Billiton and Rio Tinto, later securing FMG as a major client when it bought 30 machines for its Cloudbreak iron ore operations and contracted WA Profiling to operate, maintain and provide all required services.

However WA Profiling was losing out to companies that recognised the potential (having seen one of the trials) and then bypassed Mr Blackburn when making purchasing decisions.

He brought in a new leadership team for his business, headed up by Mark Shelton, who'd taken a break after leaving as CEO of Skywest.

"A trial needs to be successful and then have a result, meaning something happens for us; not 'this is a great trial, now here's all of our intellectual property, you can have it'," Mr Shelton said.

It is currently in negotiations with WA, interstate and overseas companies, including in Africa, Brazil, and the United Arab Emirates.

GSM has also doubled its fleet in the past few weeks, going from seven machines to 22, making it the second largest Wirtgen surface machine fleet in the world, after FMG.

Three weeks ago, GSM brought in the largest surface machine there is, the $6 million Wirtgen 4200.

Mr Blackburn said the success of GSM had been its R&D department.

Of GSM's 300 full-time staff, largely made up of operators, maintenance crews and people on site, the 32 in R&D have helped the company improve performance and efficiency, he said.

GSM's R&D department prolonged the life of its cutting tools almost 10-fold by strengthening the hardfacing on the ground-engaging tools, known as teeth, and the tool holders that encase them.

The department is now working with CSIRO on developing and patenting new technology for GPS steering on surface miners and remote operation.

With a new leadership team in place focused on educating and securing new clients, more of Mr Blackburn's time has been freed up for promotion.

"I call him the ambassador of surface mining because he's it. He knows more about it than anyone. Nobody's got Pete's experience," Mr Shelton said.