The Greek financial crisis bears an eerie similarity to events in Athens thousands of years earlier. 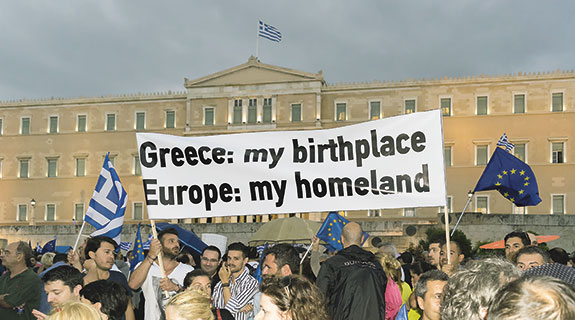 BOTH WAYS: The majority of Greeks want to remain in the eurozone, but a referendum overwhelmingly rejected austerity measures associated with the recent bailout package. Photo: iStockphoto

The Greek financial crisis bears an eerie similarity to events in Athens thousands of years earlier.

My lack of familiarity with recent Hellenic history means I have tended to shy away from reading about the ongoing slide in Greece’s economy.

But that predisposition shifted somewhat following remarks by Poland’s former foreign minister, Radek Sikorski, during his mid-2013 visit to Australia.

He alerted Australians to the fact that, despite Greece’s population being one quarter of Poland’s 38 million, Greece had four times as many public servants.

And I thought Australia was over-bureaucratised.

“That would have been the time to carry out reforms painlessly.”

Understandably, Germans weren’t impressed with the fact that they work till the age of 69 while their big borrowing European Union brethren retired at 58.

Although that’s now been lifted to 67, the nine-year rise was doggedly opposed and has failed to block more than 500,000 workers from retiring early since 2010.

Bizarre outcomes like that make one wonder how it could be that the term ‘economics’ was derived from a Greek word, ‘okionomia’, which means ‘household management’ or ‘management of house affairs’.

Pioneer writings on economics are found in the works of Hellenic icons like Plato, in The Republic, and Aristotle, whose writings Christendom consciously embraced to emphasise the role of reason in thought and human endeavour.

Greece, as Mr Sikorski noted, had squandered the opportunity to transform itself into an expanding economy.

Instead its governments of the past decade or so set about confirming the late and great Margaret Thatcher’s most memorable warning: “The problem with socialism is that you eventually run out of other people’s money”.

Greece’s wasteful spending obsessions look even worse when compared with what’s happened in the three former Soviet incorporated Baltic nations of Lithuania, Latvia and Estonia, as well as Slovenia, the Czech Republic and Poland, all of which promptly set about transforming their Moscow-imposed depressed economies into steadily expanding ones.

Not so Greece, where its latest coterie of politicians, who won government last January, have inclinations that had previously pauperised those once-Bolshevised countries.

According to The Economist, one third of Greece’s leftist governing Syriza Party is made up of “Maoists, Marxists and supporters of Che Guevara”.

Even so, it would be unfair to place all the blame for Greece’s enormous troubles only upon its current leaders.

Not only should Mr Tsipras’s many prime ministerial predecessors (especially Messrs Konstantinos Karamanlis and Andreas Papandreou) share that, so too should Greek politicians of recent decades.

Columnist Henry Ergas succinctly made this clear in his recent assessment of today’s unfolding Greek tragedy, in The Australian.

“As two of the leading scholars of modern Greece, Mark Mazower and Stathis Kalyvas, have argued, the recurring pattern in the country’s history, from its 1821 war of independence on, has been one in which Greece periodically attempts more than it can achieve, only to be rescued through the intervention of friendly powers,” Ergas wrote.

“Independence itself, for example, was secured only thanks to France, Britain and Russia, whose navies destroyed the Turkish and Egyptian fleet at the battle of the Bay of Navarino in 1827.

“Equally, it was the European powers who salvaged Greece after it was defeated by Turkey in the war of 1897, and stabilised its finances in the tumultuous decades that preceded and followed that rout.

“As for the no less disastrous Greek invasion of Turkey in 1921, it was an international humanitarian effort — arguably, the first of its kind — that allowed the country to smoothly absorb the 1.3 million refugees forced out of Turkey in its wake.

“And it was international intervention, led by Britain and the US that defeated the communist insurrection in the savage civil war of 1944-48, and ensured, as the war ended, that Greece’s economy got back on its feet.

“Little wonder then that Greece looked to Europe when the military junta, which controlled the country from 1967 to 1974, collapsed after an ill-judged attempt to impose union on Cyprus.”

And we find earlier backing for Ergas’s contentions.

Lady Thatcher, during her 1994 Hillsdale College (Michigan) lecture, titled ‘God and Man: Perspectives on Christianity in the 20th Century’, made precisely this point before an audience of 2,500 students and guests.

“Sir Edward Gibbon (1737-1794), author of The Decline and Fall of the Roman Empire, wrote tellingly of the collapse of Athens, which was the birthplace of democracy,” she said.

“He judged that, in the end, more than they wanted freedom, the Athenians wanted security.

“Yet they lost everything – security, comfort, and freedom.

“This was because they wanted not to give to society, but for society to give to them.

“The freedom they were seeking was freedom from responsibility.

“It is no wonder, then, that they ceased to be free.”