Spoiled for choice on apartments

There's plenty of industry confidence in the growth in apartment living, despite some concerns about the short-term outlook. 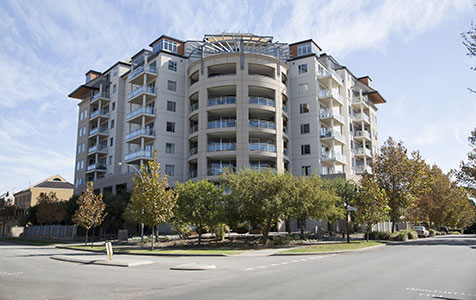 There's plenty of industry confidence in the growth in apartment living, despite some concerns about the short-term outlook.

Apartment buyers in Perth are becoming more discerning about where they invest their money, as increased supply gives potential purchasers more options.

Four high-profile property executives at a Business News Success & Leadership forum this week – Bill Hames, Paul Blackburne, Gavin Hegney and David Airey – stopped short of saying Perth’s apartment market was in danger of oversupply, but all shared the view that not all apartment projects were created equal.

The main concern in the industry is Perth’s slowing population growth, with the latest Australian Bureau of Statistics figures indicating growth was 2.9 per cent for the year to December 2013, down from a peak 3.5 per cent in 2011-12.

Real Estate Institute of Western Australia research showed 50 per cent of Perth apartments were owned by investors and were in the rental market, posing a prickly proposition for apartment developers at a time when the residential leasing market was struggling.

REIWA statistics showed there were around 6,000 properties, including detached homes as well as multi-residential dwellings, available to rent in the metropolitan area, an increase of 30 per cent on the end of last year.

Rental vacancies, REIWA said, increased to 4.2 per cent, up from 3.2 per cent at the same time last year.

Much of the debate swirling around the sector in recent months has been centred on an assumed structural change towards apartment living, but REIWA executive manager of research Stewart Darby said building approvals statistics showed otherwise.

“This latest upturn in multi-residential activity is coming at the time of a surge in new detached housing – suggesting little evidence of a change in buyer preference,” Mr Darby told Business News.

Nevertheless, Mr Blackburne was extremely bullish on the prospects for apartment developers, inlcuding the possibility of a surge in Chinese investment.

He expected Perth would be able to absorb another 300,000 to 400,000 high-density dwellings if apartments made up a ‘normal’ percentage of 30 per cent of the market.

“Yes, there will be periods every five to seven years where you can’t sell anything and a few developers will go broke because they don’t have the cash flow to get through it, but the long-term trend is going to be a tripling of the amount of people that live in apartments over the next 30 or so years,” he said.

Mr Blackburne said there were 19 apartment projects either under construction or about to begin construction in the metropolitan area, which would deliver around 1,000 apartments to the market.

He said while sales at his company were particularly strong over the past three months, that was not necessarily indicative of the status quo in the wider market.

“The wider market is a lot more fickle; projects that aren’t well priced and aren’t in good areas or don’t have good designs are a lot harder to sell,’ Mr Blackburne said.

“But if you’ve got the right stuff in good areas there is demand for it.”

Mr Airey agreed, telling the forum the quality of apartment product on the market was becoming increasingly important for buyers.

“We’re finding buyers are so picky that a five-year-old apartment, even in a good area, is regarded as old,” Mr Airey said.

“It’s very important that the quality is well and truly five or six star if the product is going to sell.

“That’s what the public is wanting. We’re continually raising the bar and people are demanding much higher quality.”

Mr Hegney said he was a believer in the structural change, but shared the view that location was an important determining factor for the success of apartment developments.

“We need to look at people looking at locations, particularly the needs of the younger generation coming through and baby boomers downsizing,” Mr Hegney said.

“But I do think we will see more apartments and the house-and-land stranglehold on the market will slip as the years go on and Perth matures.”