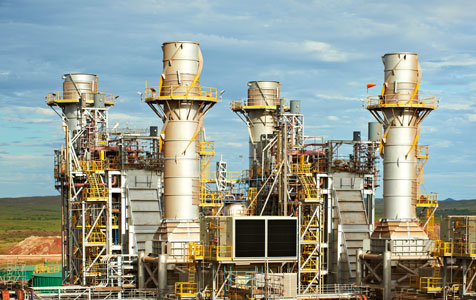 Debate over a new model for the operation of, and access to, electricity infrastructure in the Pilbara is decades old, with the existing ad hoc approach resulting in many mines spending hundreds of millions of dollars developing their own power assets (see table).

As demand for power increases, private generators such as Alinta Energy and TransAlta are now seeking investment opportunities to provide electricity to mines as well as residential and business users.

The affordability of linking assets remains an issue, however.

A December 2014 issues paper raised several issues regarding the Pilbara power grid, known as the North West Interconnected System, including different voltages in its transmission infrastructure, constrained capacity, and a lack of connection to many of the largest power stations. 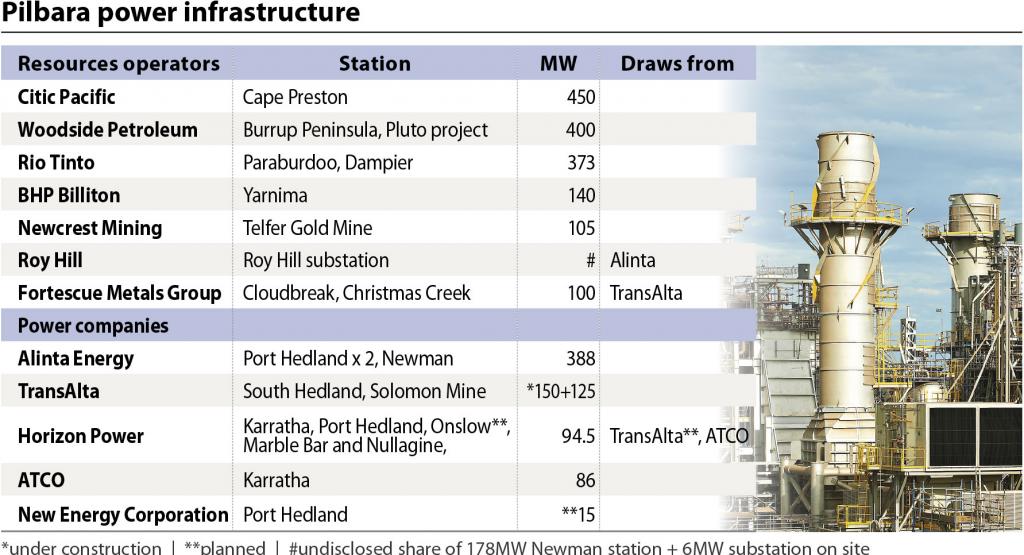 Unlike the state’s regulated main electricity network, which stretches from Kalbarri across to the Goldfields and down to Albany, the NWIS is not centrally planned or operated, but instead allows any licensed company to sell electricity, provided it can access those customers.

With only 94.5 megawatts of its own power generation, the state-owned entity relies on buying electricity from private generators like ATCO Australia to top up supply, with customers’ power requirements peaking at 130MW.

Alinta Energy’s share of the NWIS connects its facilities in Boodarie and Port Hedland, while its Newman power station is not connected to the NWIS but is being connected to the under construction Roy Hill mine, 120km to the north-east.

Energy Minister Mike Nahan announced earlier this month the establishment of a team to create and implement a new Pilbara power model, aimed at increasing interconnectivity and sustainability as well as encouraging greater private investment.

The decision to create a new power model follows stonewalling tactics by Horizon Power and Alinta Energy, which formally applied to Dr Nahan for access to each other’s networks after months of private negotiations.

In a letter sent in October 2014, Alinta Energy chief executive Jeff Dimery described how Alinta’s plans for expansion in the Pilbara were being thwarted by Horizon.

“Alinta has obtained a retail licence and possesses the requisite access to generation capacity to supply customers in the Horizon NWIS network,” he said.

“Access to the Horizon NWIS network is the only impediment to Alinta’s entry to the market.”

A month later, a letter to Dr Nahan from Horizon Power managing director Frank Tudor requesting access to Alinta’s transmission network in east Pilbara said a lack of access was a key issue for the sustainability of power supply to the region.

“The combined effect is likely to lead to a higher frequency of power outages, resulting in production losses and offsetting some of the competitive advantage of businesses in the Pilbara.”

Both companies have since withdrawn their applications for coverage to each other’s network following the government’s announcement to develop a new Pilbara power model.

The companies declined to provide further information, other than to say they looked forward to being a part of creating the new system.

History suggests the logistics of sharing infrastructure in the Pilbara can be fraught, as demonstrated by Brockman Mining’s attempts to access Fortescue Metals Group’s Total Pilbara Infrastructure rail network, which led to a protracted legal case.

However, with numerous reports outlining the economic wastage incurred when companies fail to negotiate infrastructure-sharing agreements, the issue is sure to be top of mind for the team led by Mr Rowe.

Also unclear at this stage is how far the state government will go to encourage private investment.

While Premier Colin Barnett last year flagged modest asset sales, entertaining the prospect of reaping more than $1 billion from the privatisation of port assets in Kwinana and Utah Point (in Port Hedland), he has shied away from privatising electricity assets.

Privatising Synergy and Horizon Power could be worth more than $10 billion, according to Infrastructure Partnerships Australia chairman Adrian Kloeden, who said during a trip to Perth last October that privatising electricity assets should be the government’s first priority.

TransAlta, which this month started building a 150MW power station in South Hedland that will provide power to Fortescue Metals Group and Horizon, is one of many private companies interested in securing more Pilbara power assets.

WA general manager Aron Willis said that, in the past three years, the Canada-based company had invested more than $1 billion in WA, including the purchase of FMG’s Solomon power station, and setting up a joint venture with DBP Development Group to build and operate FMG’s under construction gas pipeline

“We’re committed to this market, we see (the Pilbara) as a key operating region for the company and we’re looking for more growth opportunities,” Mr Willis said.

Mr Willis wouldn’t be drawn on what particular Pilbara power assets TransAlta was interested in and declined to speculate to whether some or all of Horizon Power’s assets could be privatised.

“Could the north-west be completely privatised? I think conceptually yes it could, would the state go there, I don’t know.”