Rudd steps down in surprise move 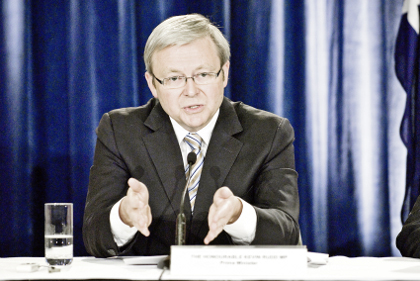 Kevin Rudd has resigned as Foreign Minister, saying he could no longer perform the role without the support of Prime Minister Julia Gillard.

Mr Rudd called a late-night press conference in Washington DC to announce his decision, saying the ongoing leadership speculation had turned into a “soap opera”.

“The simple truth is I cannot continue to serve as foreign minister if I do not have Prime Minister Gillard's support,” he said.

Mr Rudd said his credibility had publicly come under question from a number of ministers and ‘faceless men’, and it would be distracting for the government if he continued in the job.

He did not, however, say whether he would challenge for party leadership but that did not stop him taking aim at Labor's factions and those who helped Ms Gillard into power.

"I promise you this - there is no way, no way, that I will ever be part of a stealth attack on a sitting prime minister elected by the people," he said.

"We all know that what happened then was wrong, and it must never happen again."

Mr Rudd said he would make an announcement regarding his future before the return of Parliament next week.

He said the government must shift its focus to determine who within the party has the best chance of defeating Opposition Leader Tony Abbott in the upcoming federal election.

"Mr Abbott, I believe, does not have the temperament or the experience to ever be elected to hold the high office of prime minister of Australia,” Mr Rudd said.

"But at present, and for a long time now, he has been on track just to do that."