Riding a wave of clean energy

WA has become a leader in wave energy, but commercial realities loom as a major constraint to rolling out the technology to the national electricity market. 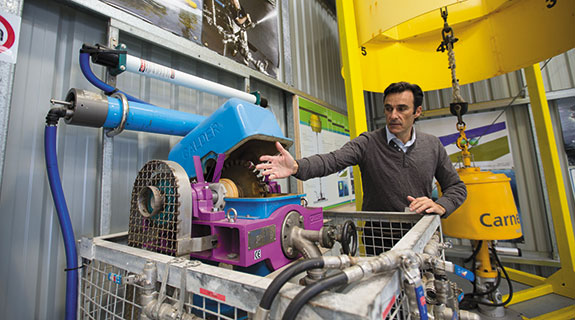 WA has become a leader in wave energy, but commercial realities loom as a major constraint to rolling out the technology to the national electricity market.

When Carnegie Wave Energy managing director Michael Ottaviano founded the business, he was up against 12 established global players all racing to commercialise similar technology designed to harness the ocean’s power and turn it into electricity.

Now, as Carnegie edges closer to commercialising its Ceto technology, Dr Ottaviano said there was just a handful of competitors worldwide – an indication of the harsh realities involved with taking an innovative technology to market.

Of that handful, however, three are based in Western Australia – Carnegie, Bombora Wave Power, and Protean Wave Energy.

Since late last year, Carnegie has been supplying power to the Australian Defence Force at Garden Island using its patented Ceto units – a type of buoy system that delivers high-pressure fluid to turn hydroelectric turbines, all powered by the natural motion of the ocean’s waves.

It has taken nearly nine years to get to this point, a period that Dr Ottaviano said had been a massive challenge for the business.

“Evidence of that is the only operating wave power station in the world is down here.”

Despite succeeding where others had not, and all from a base in WA, Dr Ottaviano said the commercial future of Carnegie was most likely outside Australia.

“The thing about Australia is it’s a fantastic place to do R&D, but we have very cheap power,” he said.

“Not so much at the retail level, but at a wholesale level, what a generator gets for selling its power is extraordinarily cheap.

“The challenge for Carnegie when we’re looking at doing projects for Australia is we could do a plant here for $100 million, or we could do the same project in Europe, which would cost the same, but I could sell the power for five times higher than what I’d sell it for in Australia.

“That’s pretty hard to compete with, so we have to go where the revenue is highest for us.”

Dr Ottaviano said the two most economic markets in the short term would be Europe and the UK, due to high power prices and specific incentives for wave energy.

But that’s not the only possibility for Carnegie, with island markets also looming as a significant opportunity.

“Islands in the middle of the ocean, that have got a wave resource, that are currently relying on diesel being shipped in; they are paying a lot for their power and they don’t have energy security,” Dr Ottaviano told Business News.

“We can go there and offer them a really environmentally friendly source of power that’s secure and clean.”

However, difficulties remain in securing commercial support for wave energy plants in Australia, as evidenced by Bombora Wave Power’s first steps to develop its technology offshore last week, when it announced an evaluation agreement with Indonesia’s Anoa Power.

Bombora’s technology is a flexible membrane that sits on the sea floor and squeezes air through a circuit when a wave passes over it, extracting electricity through an air turbine.

The agreement with Anoa power will entail the evaluation of suitable deployment sites to determine if electricity generation is viable at those locations.

Another Perth-based player making power from waves is Protean Wave Energy, which is exploring the possibility of developing a wave farm to provide electricity at Two Rocks, for development group Yanchep Beach Joint Venture, led by Japan’s Tokyu Corporation.

Protean, which is owned by ASX-listed Stonehenge Metals, considers Two Rocks to be the ideal location to demonstrate its technology, which operates on similar principles to that of Carnegie.