Budding WA gold producer, Ora Banda Mining, has delivered a maiden mineral resource estimate for the Riverina South prospect as it prepares to start mining at the nearby Riverina open pit this month as part of its $45 million Davyhurst gold redevelopment 120km north-west of Kalgoorlie. After an extensive drilling program, the company released an initial resource for Riverina South of 650,000 tonnes at 2.1 g/t for 43,000oz of contained gold. 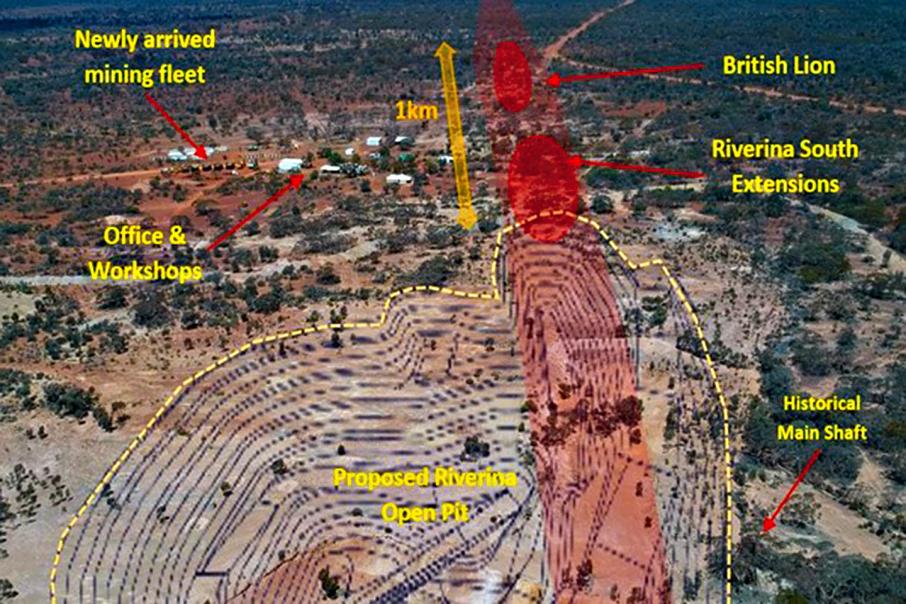 Budding WA gold producer, Ora Banda Mining, has released a maiden mineral resource estimate for the Riverina South prospect as it prepares to start mining at the nearby Riverina open pit this month as part of its $45 million Davyhurst gold redevelopment 120km north-west of Kalgoorlie.

The Perth-based company’s vision for the historic project envisages a rapid, low CAPEX intensity pathway to initial gold production from the mining of satellite deposits driven by respectable gold grades and simple metallurgy.

In light of the new resource estimate, Ora Banda’s global mineral resource – taking in the Davyhurst deposits and the high-grade Mount Ida project 125km north of the treatment plant – has been increased to 24.3Mt at 2.3 g/t for 2.17 million ounces of contained gold.

Ora Banda Mining Managing Director, David Quinlivan said: “This area (Riverina South) has been targeted as part of our ongoing resource replacement and growth strategy due to its high prospectivity and close proximity to the main Riverina mining area. This is the first step in increasing the potential mine life at Riverina and our program is to now continue with an upgrade to the resource classification and ultimately toward defining the potential of this area to add to the Riverina ore reserve base.”

The company’s significant drilling campaign was focused on the area south of the planned Riverina open pit. It says a 300m auriferous corridor may occur between Riverina South and British Lion and has seen limited drilling work.

Ora Banda’s definitive feasibility study, or “DFS” for the Davyhurst gold operation, completed mid-year, contains compelling project economics. It is forecast to pump out free cash flows after tax of $357.8 million – or $68.8 million a year – over an initial mine life of 5.2 years.

Key assumptions used in the DFS financial projections were average gold production of 81,000 ounces per annum, a received gold price of A$2,550 per ounce and all-in sustaining production costs of $1,566/oz.

The DFS was predicated on refurbishing the mothballed 1.2 million-tonnes-per-annum processing plant on site and significant associated infrastructure at Davyhurst and probable ore reserves of 460,000oz of gold from 6.1Mt of ore at 2.4 g/t across half a dozen satellite deposits within 50km of the plant.

CAPEX has been forecast at a mere $45.1 million split approximately 57:43 between the plant rejuvenation and pre-production mining costs, respectively, with project capital payback at an extraordinary seven months.

Initial reserves represent about 21 per cent of Ora Banda’s global gold resource inventory, so it looks like the company has plenty of reserves growth potential to drill out. No surprises then that it intends continuing to undertake a concerted campaign of resource definition drilling.

With Diggers & Dealers coming up next week, Ora Banda will likely get more than a passing gaze from the delegates at the annual Kalgoorlie gabfest.