Reedy Lagoon has received some very encouraging results from a subsurface 3D geophysical survey at its Clayton Valley project in Nevada, USA. The survey shows an intriguing, 200m thick, conductive mass, starting from about 250m vertical depth, which the company says could represent multiple lithium-rich brine aquifers. The project is directly adjacent to Albemarle’s Silver Peak mine, which is North America’s only producing lithium brine operation. 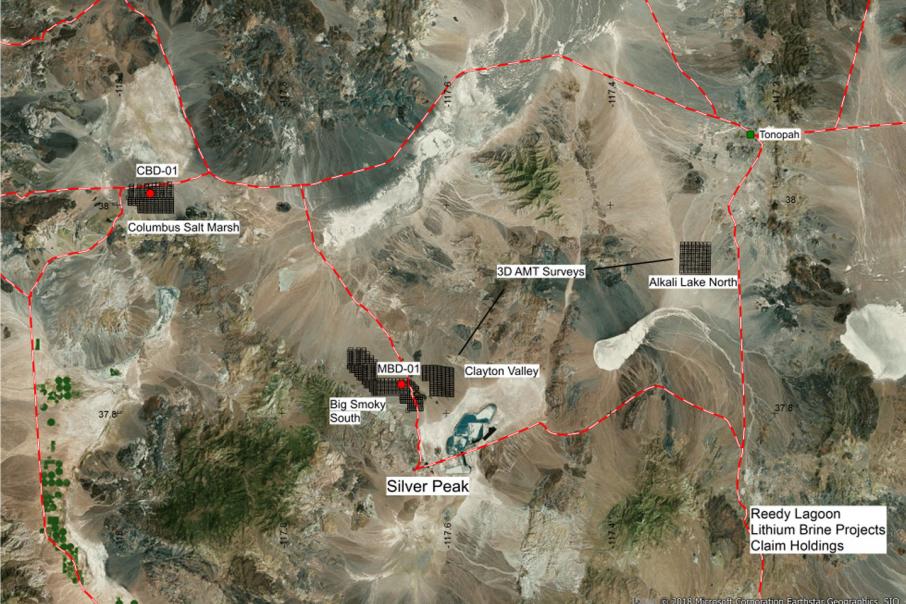 Results have indicated a substantial tabular conductive body, starting at about 250m vertical metres from surface, that runs vertically for about 200 metres.

A geophysical review has estimated that the volume of the conductive body is about 1 cubic kilometre.

The Clayton Valley project is located just to the east of Reedy’s Big Smoky South project and directly adjacent to the north-western extent of Albemarle’s Silver Peak lithium brine operation.

According to the company, the geophysical results provide strong evidence that lithium brines might be present within its Clayton Valley project leases.

Recent drilling at Big Smoky South did not identify that substantial brines were present, but importantly lithium clay minerals were detected by analysing data from scanning of the project’s diamond core.

Additionally, all assay results from diamond core samples of sediments drilled earlier this year at the Columbus Salt Marsh and Big Smoky South projects will be received shortly, creating some market anticipation.

Things are moving quickly in Nevada now for Reedy, with a number of developments in the processing capability to extract lithium from brines being undertaken by Reedy’s peer group in the region.

Pure Energy has been investigating the extraction of lithium from brines without the use of large, cumbersome, environmentally unfriendly solar evaporation ponds and Reedy has been studying their learnings.

Reedy may be onto something here, with a 3D subsurface geophysical survey likely to throw up much more useful exploration targeting data than traditional 2D surveys, which simply give a subsurface profile of a single section line across the prospective zone.

It will be interesting to see what Reedy makes of this new information over its two undrilled lithium brine projects at Clayton Valley and Alkali Lake North.