Race to the bottom has a way to run

Architects have a saying about ‘less being more’. The mining industry has flipped that around with ‘more being less’, as shown in this week’s production reports and share prices of Fortescue Metals and BHP Billiton. 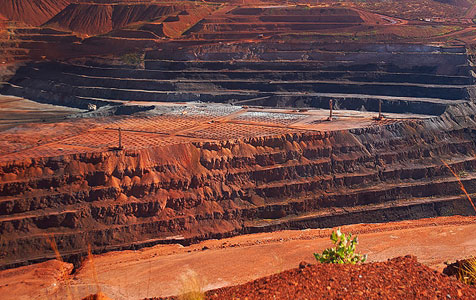 Architects have a saying about ‘less being more’. The mining industry has flipped that around with ‘more being less’, as shown in this week’s production reports and share prices of Fortescue Metals Group and BHP Billiton.

Both companies announced record output of iron ore at their mines in Western Australia, and both suffered a fall in their share price.

In Fortescue’s case, it lifted iron ore shipments by 5 per cent in the June quarter to 42.4 million tonnes, taking production for the 12 months to June 30 to a 165.4mt, up a whopping 33 per cent on the previous 12 months.

News of the record output was greeted with dismay on the stock market, with Fortescue’s share price falling in early trade today by 8 cents (4.6 per cent) to $1.67, alarmingly close to the stock’s multi-year low reached earlier this month of $1.61.

It was a similar story with BHP Billiton, which yesterday reported a 13 per cent increase in iron ore output for the June 30 year at 254mt. On the stock market, BHP Billiton shares have fallen by $1.50 (5 per cent) over the past 48 hours.

Different people will interpret those numbers in a number of ways, with one interesting observation being that Fortescue appears to have been lifting output at a substantially faster rate than BHP Billiton.

Given that earlier this year Fortescue chairman Andrew Forrest was calling for a political inquiry into market flooding by BHP Billiton and Rio Tinto, it might now be time for the spotlight to be turned on Fortescue as the guilty party.

Rather than waste time finger pointing, however, it is more interesting to look at the change that has occurred in mining and see it as fresh warning for investors who are hoping for a quick recovery.

A few years ago, news of record mine production would have been welcomed by investors because it was a pointer to higher profits and increased dividends.

Today, with the resources boom a fading memory, more ore means lower share prices, because demand in China and other markets for Australia’s raw materials has stopped growing – and oversupply inevitably leads to lower prices.

What’s happening is neatly conveyed in the latest reading of the Bloomberg commodity index, which tracks 22 of the world’s most widely used minerals and foodstuffs. Last week it fell to a level last seen in 2002.

In other words, the China-driven boom that propelled WA to its fastest growth rate in more than century has come to an abrupt end, with 13 years of rising prices totally negated.

A slowdown in the rate of China’s growth is one reason for the return to 2002 prices; but it’s not the sole cause, with China still growing at a cracking 7 per cent annually.

The problem for WA is that much of China’s growth today is in services as the country shifts from its construction phase to a lifestyle phase, which means increased demand for food and services.

Iron ore is a victim of this change of focus, with miners forced to play a deadly game of race to the bottom in which only the miners with the lowest cost of production can profit.

Unfortunately, the process of being a low-cost leader is being achieved in two ways. There is direct cost cutting and there’s lowering unit costs – code for producing more with less.

Those record iron ore production rates of Fortescue and BHP Billiton, and the share price reaction, are examples of what happens more too much iron ore hits an already full market.

The road ahead does not look any easier because none of the leading producers is showing any sign of slowing output. In fact by this time next year, WA’s iron ore industry will almost certainly be setting fresh records, thanks to the production start at the Roy Hill mine.

The irony is that the profitability of the entire industry is likely to continue falling as more ore is shipped out of WA, with the result being that more high-cost miners will be forced out of the industry.

More really is less when it comes to mining.