SPECIAL REPORT: There have been some big moves among corporate finance dealmakers in Perth, who worked on more than 850 transactions worth nearly $25 billion in 2017. 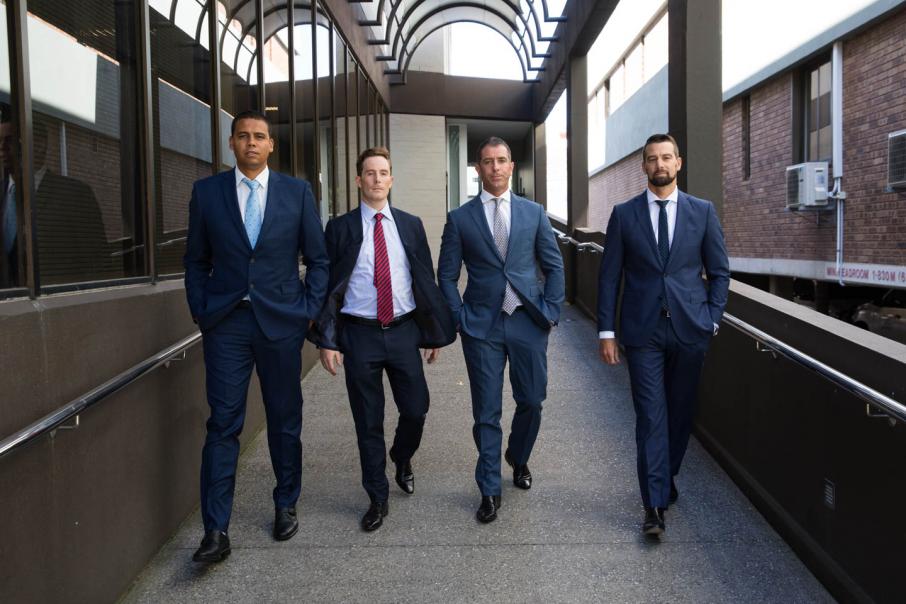 There is a long-running pattern in Perth business whereby the big international firms lift their presence during boom times and retreat when markets get tougher.

The corporate finance market in 2017 was a prime example, with big players including UBS, Merrill Lynch and Credit Suisse cutting back their operations in Western Australia.

The flipside has been the emergence of new, smaller players, including Ashanti Capital, Sternship Advisers, Salient Corporate and View Street Partners, which are led by experienced advisers who have spotted opportunities in the local market.

These changes have taken place at an interesting time in the WA market. 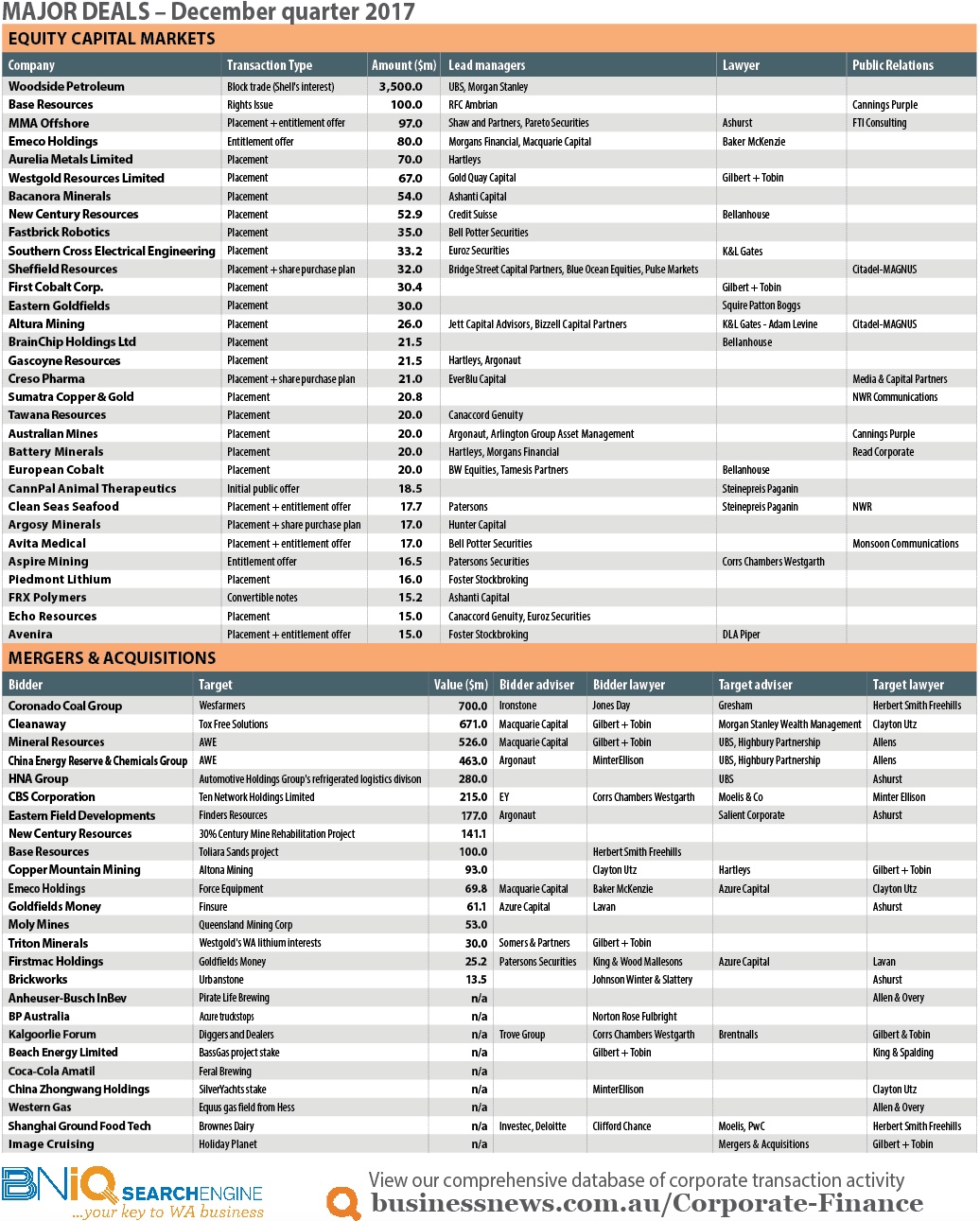 The number of $1 million-plus capital raising deals announced last year jumped to 571, according to data compiled by Business News.

That’s up from 522 in 2016 and, significantly, is more than double the number of deals during each of the three preceding years.

A $3.5 billion block trade in November, when Shell sold its stake in Perth-based Woodside Petroleum, substantially boosted that figure.

Outside that mega deal, most ECM deals in WA were worth $100 million or less, with Perth-based brokers dominating.

Hartleys was the market leader, working on 44 deals worth a combined $694 million (see table).

It has been many years since four Perth brokers have sat atop the annual ECM league tables, which subscribers can analyse online in the BNiQ Search Engine. 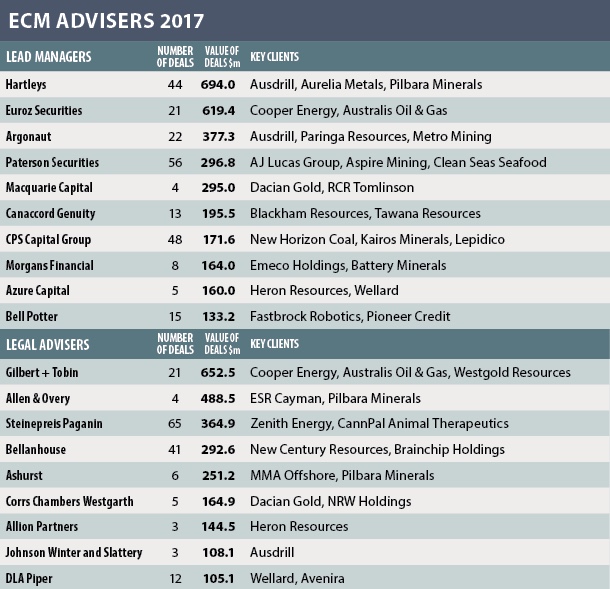 Gilbert + Tobin was top among the law firms, helped by the fact it worked on several large raisings managed by Euroz.

Notable is the continuing growth by Bellanhouse Lawyers, which is eating into the market for smaller deals that has been dominated for years by Steinepreis Paganin.

A new player in the market is West Perth-based Ashanti Capital, which raised $90 million across multiple transactions in 2017.

Ashanti was established in late 2016 by Rob Hamilton, who worked for Macquarie Bank and Argonaut in Perth before spending four years in Hong Kong with ReOrient Financial Markets.

Mr Hamilton divides his time between Perth, Hong Kong and other cities, and that is reflected in the diversity of Ashanti’s clients. 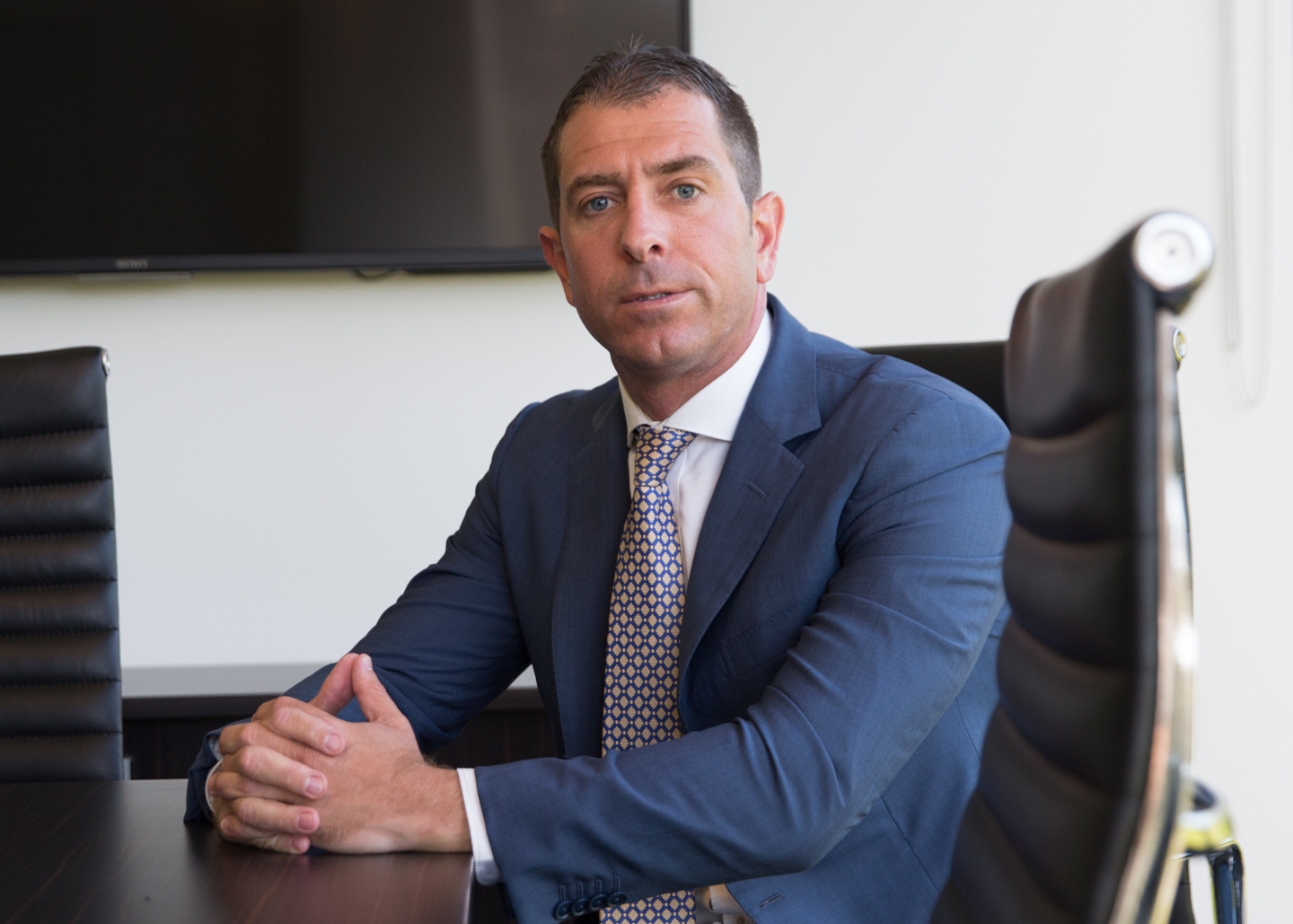 Its largest transaction last year was a £31 million ($A54 million) placement for Canada and London-listed lithium company Bacanora Minerals.

The investor was Chinese group NextView Capital, which has agreed to work with Bacanora to explore Chinese debt finance for its Sonora project in Mexico.

Prominent Perth company director and winemaker Mark Hohnen is chairman of Bacanora, in addition to his role as a member of Ashanti’s advisory board.

Ashanti raised $2 million for UK-based Adriatic Metals, which is developing several mining projects in southern Europe ahead of a planned ASX listing this year.

It also completed two capital raisings for US companies last year – $15.5 million in exchangeable notes for FRX Polymers, which is planning an ASX IPO this year, and a $US5 million placement for Bye Aerospace, a global leader in electric aircraft planning a Nasdaq listing.

“I still spend the majority of my time in Asia with our clients,” Mr Hamilton told Business News.

“I think we’ve been able to capitalise on the strength of my relationships in Asia, having lived in Hong Kong for five years.

“This has been highlighted by the quality of investors we’ve been able to attract for our clients.”

Mr Hamilton added he was already working with several local brokers and companies who wanted to tap into his investor network in Hong Kong, Singapore, South Korea and mainland China.

He plans to expand the small five-person team at Ashanti, having just set up an institutional sales desk and clearing operation with UBS.

“We are focused on expanding our east coast presence and will look to have an office in Sydney or Melbourne in the second half of 2018,” Mr Hamilton said.

Ashanti has established its own fund, with the number of investors capped at 20.

“It was a very deliberate process as to who was invited to invest,” Mr Hamilton said.

Another relatively new player with a growing presence is Cottesloe-based View Street Partners.

View Street added to its team this year when it recruited Chris Bingemann, who had been investment banking director for Merrill Lynch in Perth since 2011.

He has joined a small but highly experienced group of six advisers at View Street, which was established in 2016 by Tim Andrew and John Hannaford.

Mr Hannaford also has international experience and, since 2006, had been running West Perth-based Ventnor Capital.

It is working on several other capital raisings, primarily for innovative technology-based companies.

“It’s the same disciplines, but we’re much more hands-on,” he said.

“We get involved early with our clients, we take equity in their business and it’s a long-term relationship.”

Mr Hannaford said View Street structured deals so that nearly all of its returns came from its equity position.

The number of completed M&A deals in WA rose last year to 283, however, their aggregate value dipped to $14.8 billion because there was just one mega deal.

By far the largest deal in the BNiQ Search Engine database was Chow Tai Fook Enterprises’ purchase of WA-focused Alinta Energy for an estimated $4 billion.

That transaction put Highbury Partnership and Lazard at the top of the advisers’ league table. 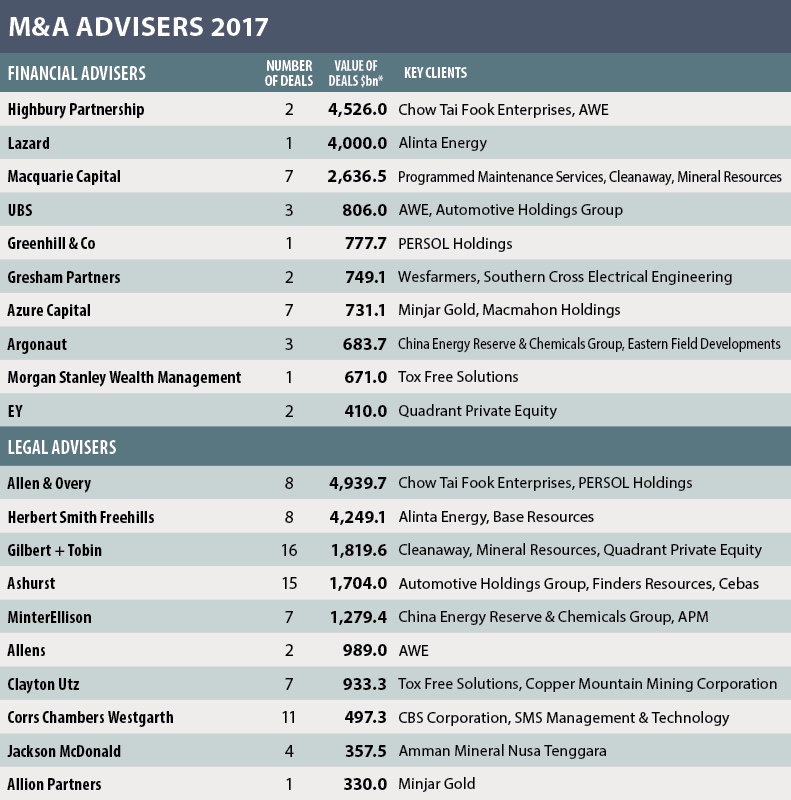 From a WA perspective, the most active advisers were Macquarie Capital and Azure Capital.

Macquarie, which has lost several big-name dealmakers in recent years, had a lead role on seven transactions, including takeovers of Perth companies Programmed Maintenance Services and Tox Free Solutions.

Macquarie is also advising Mineral Resources on its bid for oil and gas producer AWE.

UBS has been one of the more active M&A advisers in WA in recent years, and continues to be active even though local office leader Tim Day established boutique advisory practice Sternship Advisers mid year.

Mr Day said the move had opened up new opportunities.

“Perth is a mid-cap market and we have a lot more flexibility to chase that work,” he said.

“At the big banks, you can only work on the very large transactions.”

Mr Day said had a lot more freedom to work alongside other banking and advisory groups.

Sternship’s other clients include embattled sandalwood producer Quintis, which is facing a hostile board spill from a group including former chief executive Frank Wilson.

Mr Day also advised Subiaco-based Talisman Mining on a $US20 million debt finance facility to fund its share of the development of the Monty copper-gold project.

“Our presence in Perth is integral to that support and advice.”

Goldman Sachs’ patience could pay off this year, with reports it is advising Quadrant Energy on a planned stock market float.

The top law firm was Allen & Overy, which worked on eight M&A deals worth $4.9 billion, including the Alinta Energy deal.

Herbert Smith Freehills was close behind, working on eight deals worth $4.2 billion.

Gilbert + Tobin and Ashurst were both more active, judging by number of deals.

A notable feature of the Perth legal market is the ability of some partners to take a lead role on interstate and overseas deals, with little or no operational connection to WA.

Corrs Chambers Westgarth partner Jason Salman, who spends one week per month in Sydney, is a prime example.

Mr Salman was the lead adviser to US television network CBS on its acquisition of Ten Network.

Mr Salman has acted for CBS on all issues associated with Channel 10 for the last five years and proposed the deal that allowed CBS to buy Ten from its receivers, to the surprise of Lachlan Murdoch and Bruce Gordon who had previously controlled the network.

Hogan Lovells corporate partner Tim Lester is another Perth lawyer who spends a lot of time in Sydney.

He led a global team that supported Swissport Group on its acquisition of Aerocare, the number one airport ground-handling operator in Australia and New Zealand.

While Pirate Life operates from Adelaide, most of its executive team and shareholders, including chairman Anthony Dale, are based in Perth.