Two apartment projects on the outskirts of Northbridge have provided a window into the challenges facing developers in Perth’s multi-residential sector. 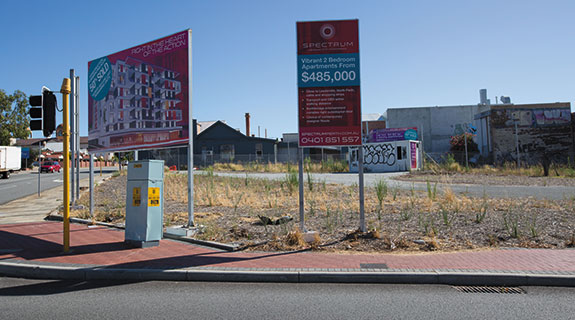 ROUNDED: The only things going up at the Spectrum site are the weeds. Photos: Attila Csaszar

Two apartment projects on the outskirts of Northbridge have provided a window into the challenges facing developers in Perth’s multi-residential sector.

Intense competition for sales in Perth’s apartments sector has claimed the scalp of a developer behind a 77-dwelling proposal in West Perth stuck in the pre-sales phase for nearly two years.

Development firm Mermaid Towers Pty Ltd, a privately owned company controlled by John Miller, was placed into liquidation last year, ending a long-running battle to get the Spectrum apartments project out of the ground.

Apartments at the Spectrum project, located on the corner of Newcastle and Charles streets in the City of Vincent, were launched for sale in March 2014, with marketing of the development handled by Blackburne.

But Blackburne ceded marketing duties back to the developer early last year, as signs went up on the development site proclaiming 50 per cent pre-sales had been achieved and construction would begin ‘soon’.

Business News understands buyers of Spectrum apartments in 2014 were told that construction would begin in early 2015, but no further communication was received.

Now, the display suite on the Spectrum site has two broken windows, has been tagged by graffiti artists, the phone connected to the number on the advertising placards rings out, and the Spectrum website does not load.

According to documents lodged with the Australian Securities and Investments Commission, Mermaid Towers was placed into liquidation in September last year at the order of the Supreme Court of Western Australia, on behalf of the Office of State Revenue.

A spokesperson for the Office of State Revenue said the Department of Finance was unable to respond to Business News’s inquiries regarding the circumstances behind the order to wind up the company, as specific taxpayer information was not disclosed.

It should also be noted that Spectrum was not the first proposal flagged for the site.

In 2008, the City of Vincent approved a development application for a seven-storey commercial project at the plot of land, which was formerly a garden centre.

That approval was superseded by an October 2011 proposal to build an eight-storey, 101-apartment complex on the site.

Another proposal for the plot was lodged in July 2012, for a 66-apartment development.

Following that approval, the site was purchased by Mermaid Towers, which submitted a new development application in November 2013 for its Spectrum proposal.

The Spectrum saga neatly illustrates the challenges facing developers in securing buyers in today’s market, with record numbers of apartments under construction across the city and even more with planning approval waiting to kick off.

As competition has increased, many industry players have cautioned buyers to carefully research their developer before committing to buy, warning they could be out of pocket on their deposit if a project falls over.

The usual advice is to go with a developer with a strong track record of delivery, which makes the case of Spectrum more remarkable as Mr Miller has 25 years’ experience in the state’s property industry.

Previous projects by companies associated with Mr Miller include apartment developments in Newman, Port Hedland and West Leederville, as well as industrial, retail, and land subdivision projects across the metropolitan area and the South West.

The other oft-repeated advice for buyers is to choose the location carefully.

On the surface, Spectrum’s location may not appear ideal for an apartment development, with no supermarkets or cafes in reasonable walking distance, and the close proximity of the Mitchell and Graham Farmer freeways a likely turn off for buyers.

But the state’s largest apartment developer, Finbar Group, has had no troubles with its Linq apartments, located just 600 metres away from the Spectrum site on the corner of James and Fitzgerald streets in the City of Perth.

Linq was approved in October 2014. Construction began in June last year, with 75 apartments in the 112-dwelling development under contract.

Finbar’s project is expected to be completed by the middle of the year.