Limitless WA: Physics researchers in Western Australia have made a global impact and have successfully commercialised their work. 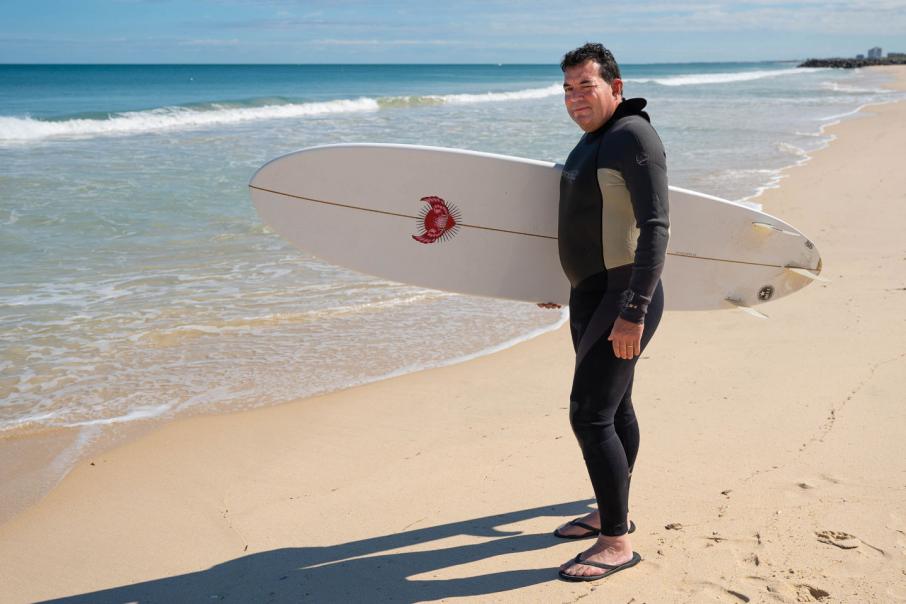 Michael Tobar loves catching waves, but his passion for surfing comes second to that for metrology.

And it’s his research in the field, the science of measurement, that has had an international impact.

Measurement technologies developed by Professor Tobar and his colleagues at the University of Western Australia to test fundamental physics have been adopted by laboratories and companies worldwide.

“The more precise you can make frequencies, the better you can do in a lot of things,” Professor Tobar told Business News.

He is among the top 60 most cited researchers in quantum physics, according to Google Scholar.

But while his work has included searches for gravity waves and for dark matter; the technology has been adapted for use in mineral exploration, radio astronomy, and defence.

“If you think of any new physics phenomena that’s been discovered, there’s usually always a practical application,” Professor Tobar said. 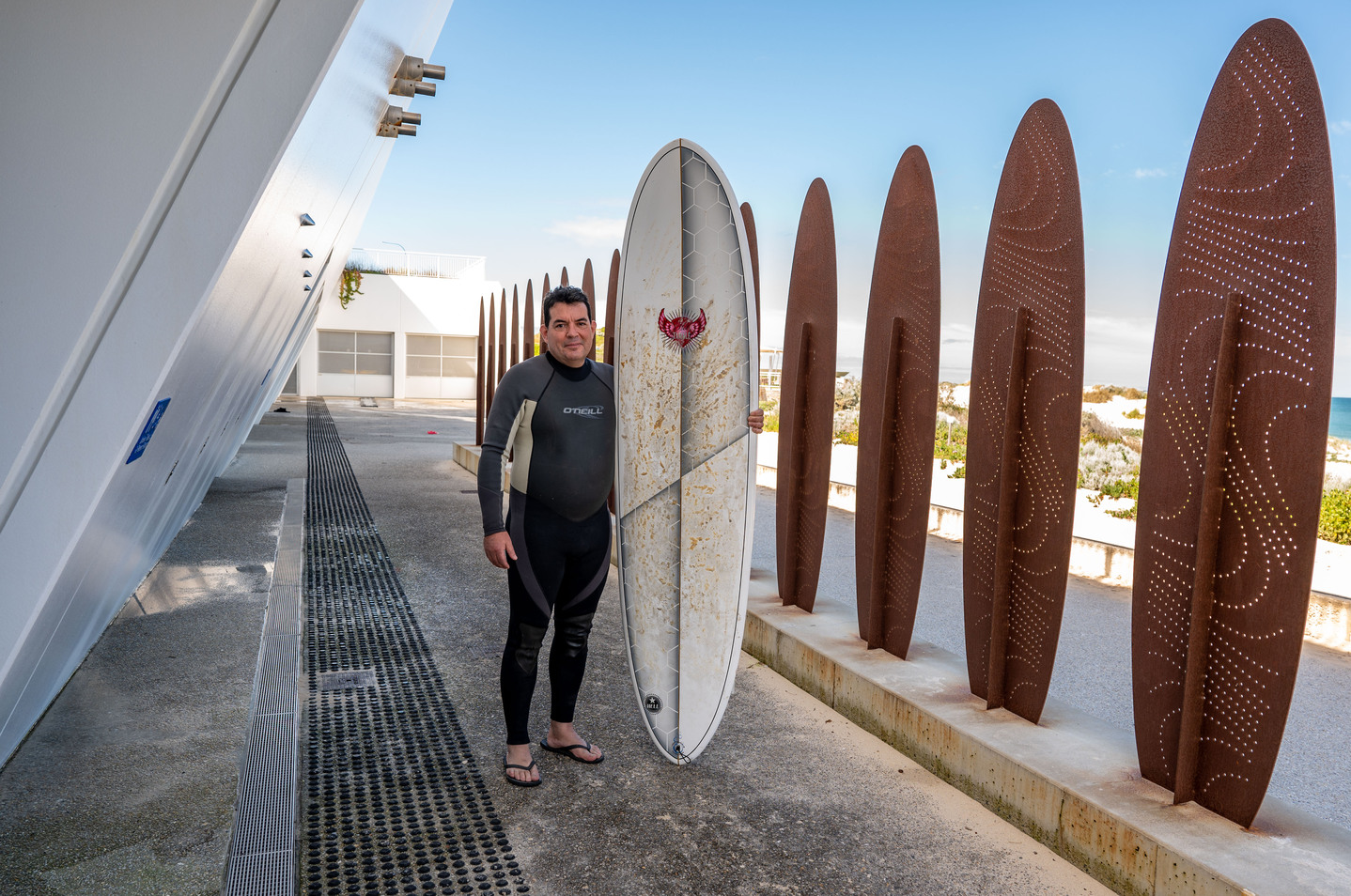 On the world’s radar

Researchers at UWA have made significant advances in precision measurement, including David Blair’s invention of the sapphire clock, and Professor Tobar and Eugene Ivanov’s cryogenic sapphire oscillator.

The sapphire clock’s accuracy is comparable to being off by one second over 40 million years, while the oscillator performs measurements that are accurate on the scale of one millionth of one billionth of a second.

The team’s work was used in gravitational wave detection and has delivered practical applications.

One researcher, Jesse Searls, created Fremantle-based high-technology firm Poseidon Scientific Instruments in 1993, and commercialised some of their work.

Mr Searls was interested in developing oscillator technology so it could be used at room temperature rather than limited to extremely cold environments.

Poseidon licensed the technologyin the 1990s, and it generated more than $30 million in sales.

The business was acquired by one of its biggest customers: American defence conglomerate Raytheon, in 2012, as part of a package of deals worth $US22 million.

Raytheon bought Poseidon because its equipment would improve the accuracy of its radars, with the technology used in the Aegis missile defence system.

Poseidon also won a $1.3 million contract in 2012 for electronics at the Murchison Widefield Array radio telescope.

“It was a huge breakthrough because it had a factor of a thousand times better sensitivity than what had ever been done before,” Professor Tobar said.

“To this day, labs around the world still have these devices and use them all the time.”

One lab at Humboldt University of Berlin conducted a test of the speed of light, which was at the time the world’s most accurate.

UWA collaborated with Poseidon for more than a decade from 1993, receiving 2 per cent of the royalties from its patents.

With those patents now expired, Professor Tobar said there was renewed interest for its application in newer fields.

“You need these very precise frequencies for a lot of quantum applications,” he said.

“There’s a company in Adelaide called Cryoclock that teamed up with us.

“Now that the patents have run out, they’re trying to repeat some of these devices for quantum technologies.” 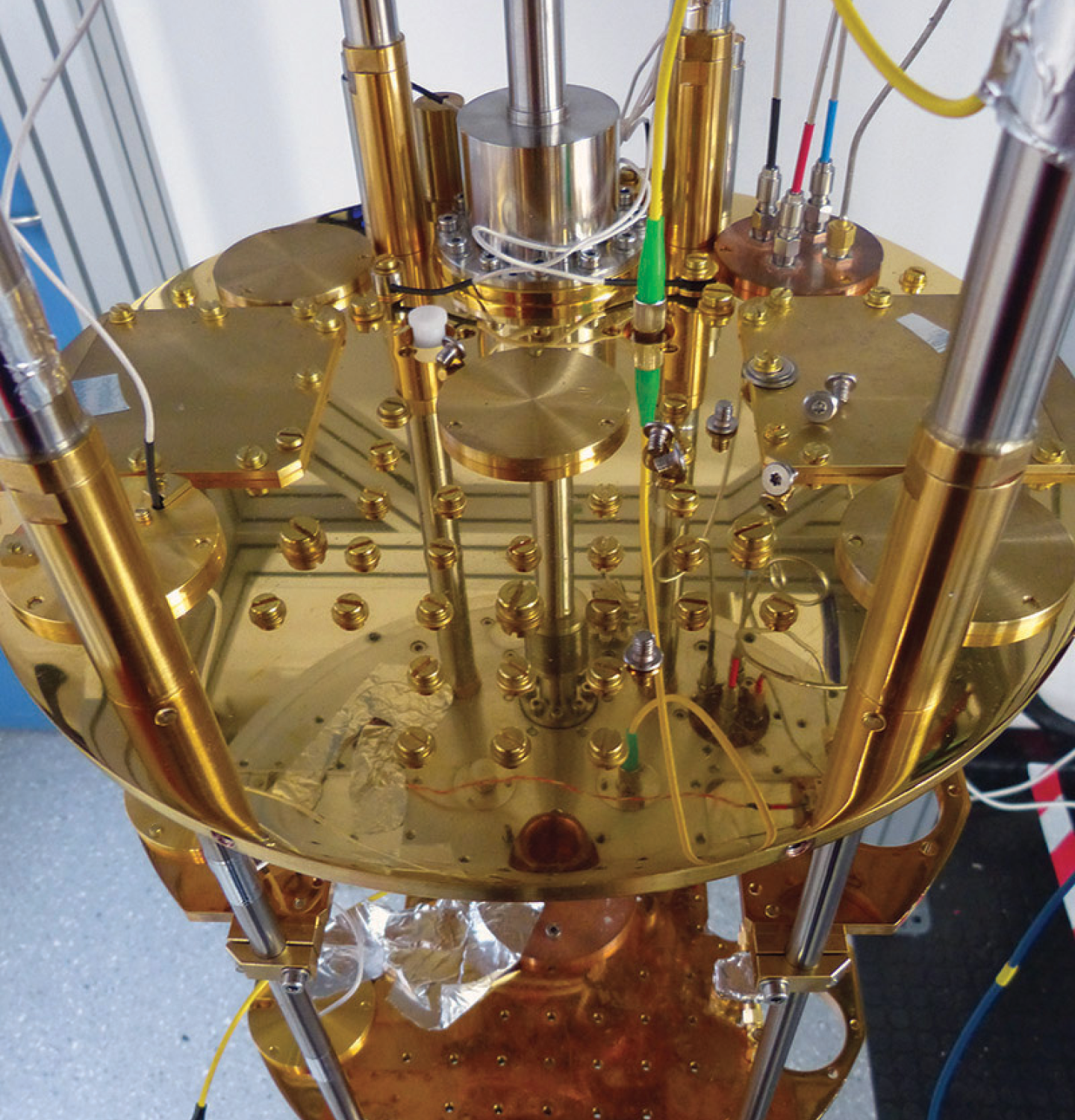 Professors Blair, Tobar and Ivanov improved the sensitivity of the resonant mass detector, which was used in finding gravitational waves. Photo: UWA

Professor Blair jointly won the Prime Minister’s Prize for Science in 2020 for contributing to the Laser Interferometer Gravitational-wave Observatory Scientific Collaboration in the US, which discovered gravity waves in 2015.

Detected about a century after the waves were first predicted, the development was a huge leap in the field of physics.

“We only understand a very small [part] of the universe, about seven per cent,” Professor Tobar said.

“One of the biggest things we’re doing is trying to uncover the mystery of dark matter, building precision measurements and the technology for that.

“There’s all this dark matter here in the room right now and it’s influencing the galaxy, but nobody knows what it is.”

Developing quantum technologies is one way through which that dark matter could be detected.

“To do the most precise measurements, you’ve got to be at the level sensitive enough to detect something really small,” Professor Tobar said.

“We’ve got an experiment that everyone recognises all over the world, but we need to make it more sensitive.

“What we’re developing is this thing that can measure a single photon.

“If we can build these photon counters for dark matter detection, they will have commercial spin-offs as well.”

That is because resources such as gold tend to be denser and have stronger gravitational pull than their surroundings.

The resulting variations in gravitational fields – or gravity gradients – can be measured by sensors flying over a mineral bed.

“We’ve developed some of the most sensitive mechanical systems that can measure gravity waves of high frequencies that have never been measured before,” Professor Tobar said.

In 2020, the team patented the smallest gravity gradiometer ever built, a portable solution licensed to Lockheed.

A separate research project started by the team in 2021 will have applications for 5G networks. 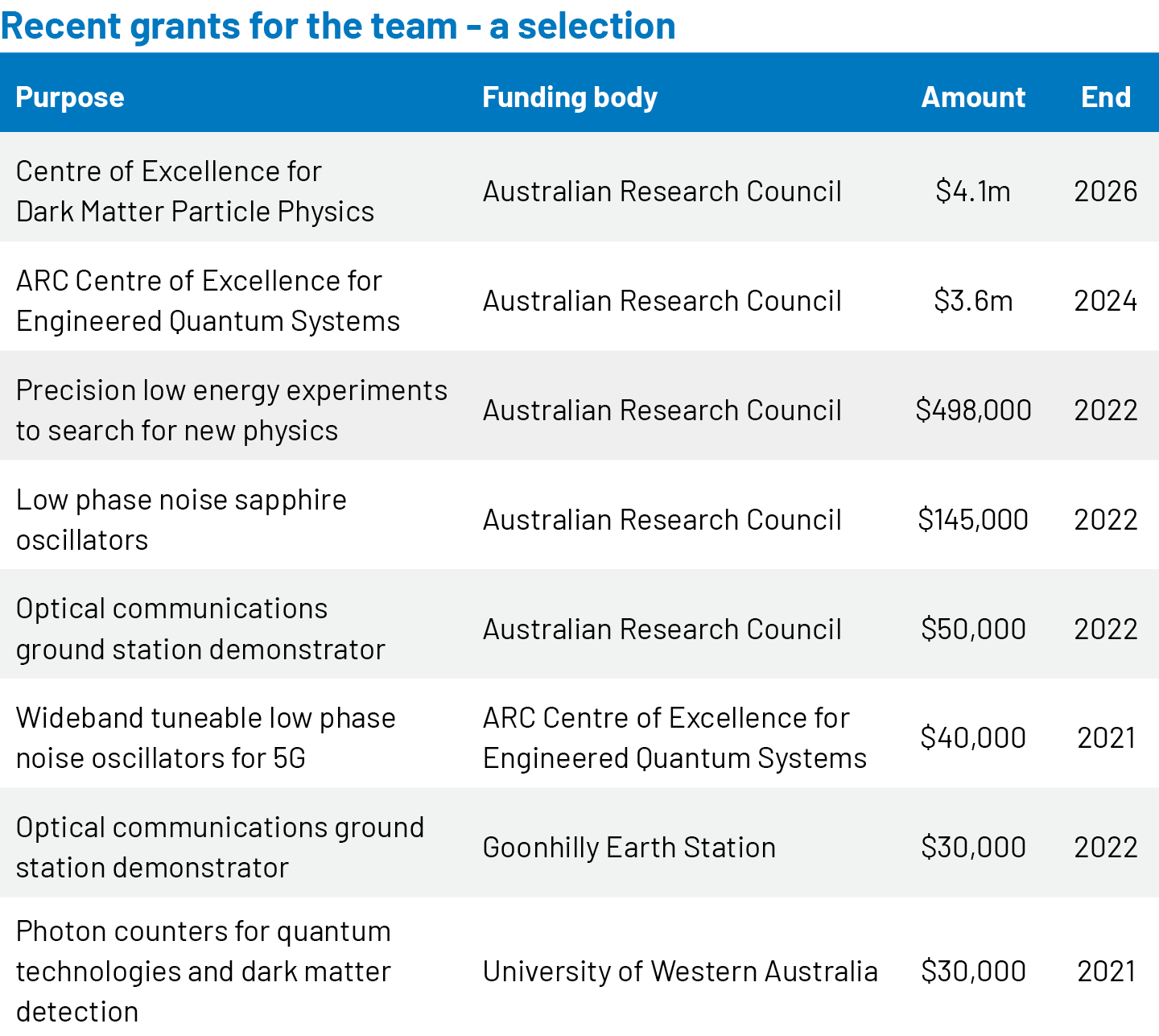 Professor Tobar’s journey started in Melbourne and stemmed from a compromise with his father.

“I always wanted to do physics, but my dad wanted me to do engineering, so I did a double degree in theoretical physics and applied maths and electrical engineering,” he said.

That led him to the field of experimental physics, in which he completed a PhD under Professor Blair at UWA.

At the time, Professor Blair had been working on precision gravity waves, receiving significant funding from Rio Tinto and BHP.

“Once you develop something that can measure something very accurately then it can easily spin-off into other areas,” Professor Tobar said.

“You just have to make your experiment sensitive to whatever you’re interested in, whether it’s dark matter, gravity waves, or gravity gradients.

That project was what initially attracted Professor Tobar to Perth, but he said lifestyle also played a part.

“Back when I was younger, I did a lot of surfing,” he said.

“And when I saw the beaches here, that was it.

“I used to live up at Trigg and come to the university and go home with the surfboard in the car.”

Professor Tobar said it was passion, testing new ideas, and embracing the unknown that would lead to profound new discoveries and applications.