A commitment to philanthropy has strengthened business networks for Perth contractor Mining and Civil Australia. 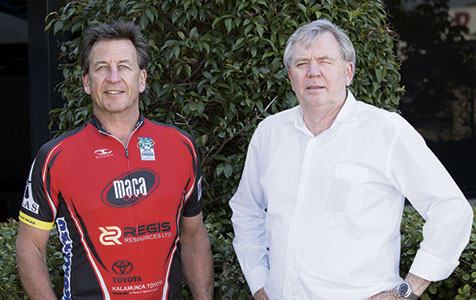 RIDE FOR GOOD: Tim Gooch (left) and Geoff Baker were part of a team of 240 cyclists, which took part in the 2013 Sunsuper Ride to Conquer Cancer. Photo: Attila Csaszar

Not long out of the saddle after completing the 200- kilometre Sunsuper Ride to Conquer Cancer fundraiser, the team at Mining and Civil Australia is already planning for next year’s event.

Now, just two weeks after the event, MACA has embarked on its campaign for next October’s ride.

It wants to up the number of participants to 300 and boost the funds raised to $1.5 million, with a target board in the company’s office already past the $100,000 mark.

The fundraising component of the event is in addition to MACA’s sponsorship deal for the ride of $750,000 over three years.

Such dedication and enthusiasm for the event is indicative of MACA’s culture, according to chief operating officer Geoff Baker.

“This is part of what MACA is about as a business; it’s not always about profits, it’s also about giving something back to the community and underlying all that, I think it adds value,” Mr Baker told Business News.

He said MACA’s emphasis on philanthropy had been made clear to shareholders, and the business had always earmarked a small percentage of profits for charitable causes.

“We do it because we have to and because we need to. If somebody walks in the front door and asks us if we can support a group we very seldom say no,” Mr Baker said.

After taking part in the inaugural Sunsuper ride in 2012, MACA mining manager Tim Gooch has become a cycling enthusiast.

He said driving such a significant fundraising campaign and convincing clients and contractors to get involved strengthened networks.

“It brings relationships with our clients to something outside of normal everyday business,” Mr Gooch said.

“And you’re talking about something that’s on a level playing field as well; those are tangible benefits because when you do have to talk shop that relationship and trust is already established.”

Mr Gooch also said there was an increasing emphasis on philanthropy across the broader business community.

“There’s a change in the market with investors [in that some] won’t invest in companies unless there’s a good community responsibility,” he said.

Some of MACA’s clients contributed a combined sponsorship totalling $400,000, which Mr Gooch said was proof the business had strong relationships, especially at a time when cash flow was tight in resources.

“Our relationships go back to before 2002 when MACA started, and we’re very loyal as a business,” he said.

“We’ve seen tough times and we’ve seen good times and the people we work with who are helping us … well, what goes around comes around.”

Mr Baker said he had no qualms about leveraging existing relationships to prompt involvement in MACA’s philanthropic efforts.

In all, MACA donates to about 80 organisations, including the Princess Margaret Hospital for which MACA has just purchased an ultrasound machine for cardiology worth $175,000.

The business has also recently sponsored an orphanage in Africa, but Mr Baker said his preference was to get staff involved rather than simply donate money.

“It’s easy to give money sometimes, but it’s much harder to give time, and I think when you do start to give time it’s much more rewarding,” he said.

Aside from the obvious health benefits, Mr Baker said the Sunsuper ride had been positive for staff morale.

“It engages everybody and brings people together with a common interest. Business today has its challenges and you perhaps need to have a break and have something else to talk about,” he said.

MACA is taking an increasing interest in health and wellness in the workplace and is including a gym in its new office to be opened in about four months’ time.