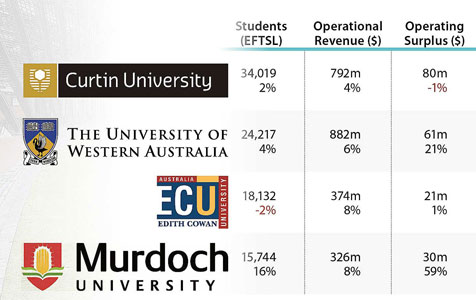 Western Australia’s public universities have continued to grow through a difficult period for the higher education sector, which was hit first by the GFC and then by adverse federal government immigration policies.

Almost across the board, student numbers and operational revenues increased in the 2012 calendar year when compared to the previous corresponding period – in most cases flowing through to increased operating surpluses.

The universities have also been steadily building their asset bases, with the University of WA’s strong lead in that respect being whittled away by its rivals as their land values and building stock increases. While all had positive gains in the most recent year, it is worth comparing to 2005 when UWA had roughly the same net asset base as Curtin University, Edith Cowan University and Murdoch University put together.

Operationally Curtin had the best surplus for 2012, although the net result when mark-to-market investment gains and losses were taken into consideration brought it and UWA more into line at just over $100 million.

Murdoch had the best operating surplus growth, at about 59 per cent, rising to more than $30 million in 2012 from about $19 million on the back of fees income and increased government funding.

This improved revenue performance was slightly offset by a drop in donations and bequests from almost $7 million in 2011 to less than $3 million last year.

Vice-chancellor salaries appear to have remained quite strong, starting at close to $700,000 for Murdoch’s Richard Higgott in his first full year at the university through to more than $940,000 for UWA’s Paul Johnson, who started his appointment at the beginning of 2012.

Professor Johnson’s predecessor, Alan Robson, appears to have been the first WA university leader to crack the $1 million remuneration barrier, earning above that level for 2010 and 2011, although some of that figure may have been inflated by various payouts relating to his departure from the leading role and long service with the institution.

Curtin vice-chancellor Jeanette Hacket is stepping down after holding the position for nine years. Last year she earned about $835,000. ECU vice-chancellor Kerry Cox was paid more than $720,000.