Liquidation only option for bust builder 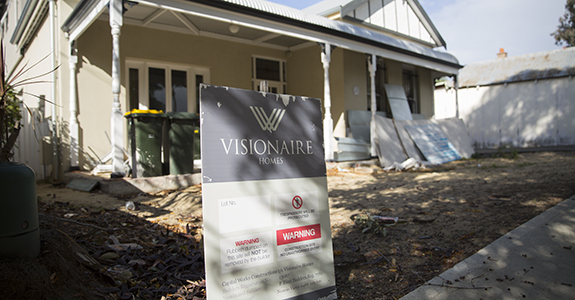 Capital Works Constructions was building under the banners Visionaire Homes and Freelife Homes.

Administrators at Deloitte say collapsed builder Capital Works Constructions may have been trading insolvent from at least June 30 last year, while it had not been paying trades and suppliers on time as far back as October 2013.

Joint and several administrators Jason Tracy and Gary Doran said in their report to creditors that placing Capital Works Constructions, as well as Capital Construction Hire, into liquidation was the only option for the bust builder, but unsecured creditors were still extremely unlikely to be repaid.

Messrs Tracy and Doran were appointed early last month and immediately ceased trading of the company, which was building houses under the brands Freelife Homes and Visionaire Homes.

Complaints against the builder date back to 2013, while its collapse has also raised questions regarding the strength of Western Australia's housing indemnity insurance scheme.

The builder’s unsecured creditors are estimated to be owed around $8.4 million, while its employees were owed more than $450,000, including nearly $190,000 in unpaid superannuation, at the time administrators were appointed.

Deloitte said, in an optimistic scenario, 50 per cent of the debts to the company would be able to be realised.

Mr Coffey directly owns a property in Subiaco and Mr Ricci a property in Dianella, but Deloitte said it was unclear how much equity was available in those properties.

Investigations by Business News last month revealed a long list of property owned by companies related to Mr Coffey, but again it is not known how much equity would be available to repay creditors.

“It is our opinion that the creditors would be best served if the group is wound up and placed in liquidation, as both companies are insolvent,” Mr Tracy said.

“Our investigations into potential breaches of the Corporations Act are ongoing and any offences, including possible insolvent trading, will be reported to ASIC in due course.

“The total owing to unsecured creditors could be as high as $8.5 million, and a return to these creditors is not expected at this stage given recovery of the available assets is not likely to be sufficient after meeting secured creditor and priority claims.”

According to the report, Capital Works Constructions may have been insolvent from midway through last year, based on trading losses, creditor debts outside its terms of trade, a deficiency in working capital, net asset deficiency, and a failure to meet statutory payment requirements.

Ultimately, the issue of insolvency needs to be determined in a court of law, based on the available evidence.

According to Capital Works Constructions’ accounts, the trading losses extended as far back as the 2013 financial year, with the builder’s loss blowing out from $79,000 in FY2013, to nearly $3.3 million in FY2014.

Capital Works Constructions’ income from construction increased by 18 per cent from FY2013 to FY2014, but its cost of sales increased by 35 per cent over the same period.

Deloitte said the major components of the costs were internal and external commissions, due and payable when slabs went down, as well as materials and labour costs. Construction delays also appeared to play a big part in the increase in costs.

Also, at June 30 last year, 30 per cent of the builder’s total payables were unpaid for at least 90 days.

“Further investigations may reveal demands extend back even earlier,” the report said.

Deloitte’s investigations also revealed payments to selected creditors, which were not identified, of rounded sums not reconcilable to specific invoices, some of which were from at least six months prior to the administrators’ appointment.

Furthermore, Capital Works Constructions had tax returns outstanding for FY2014 and FY2015, had not lodged monthly business activity statements between January and May this year, or provided a 2014 payment summary to the Australian Tax Office.

A payment plan with the ATO was entered into by Capital Works Constructions in October last year, but the builder defaulted on that plan after missing a repayment in November.

The administrators will meet with creditors on Friday, where a vote will be taken to decide whether the company is wound up and removed from the state’s list of registered builders.