ASX-listed gold explorer, Kingwest Resources continues to deliver the goods at the Menzies project in the Goldfields of WA. Recent extensional and infill drilling has returned a suite of high-grade results outside the existing mineral resource including 4 metres going 7.7 grams per tonne gold. Interestingly, some holes hit gold outside the pit shell design from the recent scoping study. 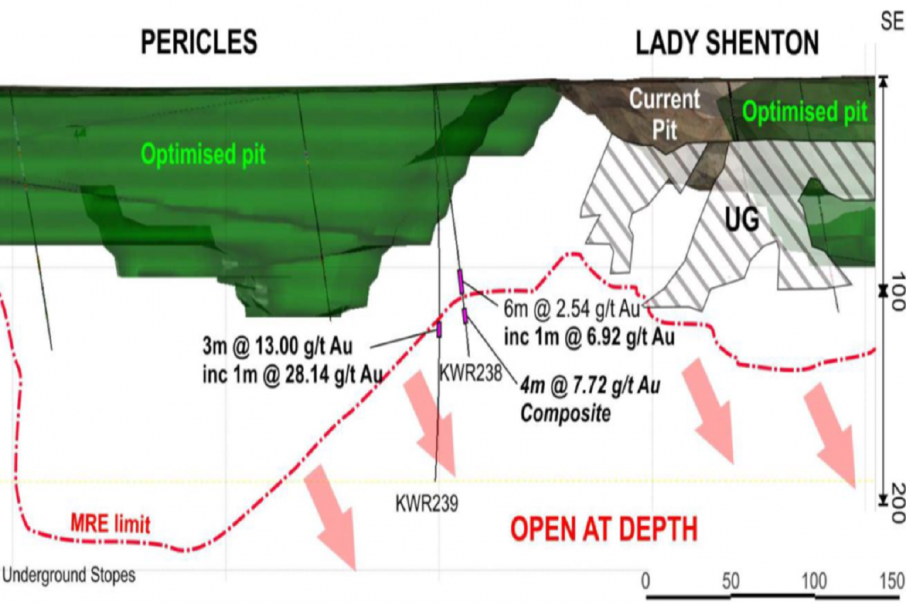 ASX-listed gold explorer, Kingwest Resources continues to deliver the goods at the Menzies project in the Goldfields of WA. Recent extensional and infill drilling has returned a suite of high-grade results outside the existing mineral resource including 4 metres going 7.7 grams per tonne gold. Interestingly, some holes hit gold outside the pit shell design proposed in the recent scoping study.

Only last month Kingwest released a resource estimate for Menzies together with a subsequent scoping study and already it appears there may be more ounces of gold to be added to future models.

The company recommenced drilling at Menzies in January 2021 with 46 reverse circulation holes completed for more than 7,000m across several gold lodes that form the resource which now totals some 446,000 ounces at 1.26 g/t gold.

The multiple high-grade results released this week add to the numerous bumper hits reported last month which were also recorded from outside the existing resource base.

Intriguingly, there were two high-grade hits of 4m going 7.7 g/t gold from 124m depth and another of 3m at 13 g/t gold from 121m. Both grades appear to be much higher than the estimated resource block grades in the vicinity to the two intercepts. Management believes that future resource updates should increase in size and grade.

Kingwest also reports the intercepts are at significantly deeper levels than the proposed pit shells generated from the recent scoping study. These intercepts indicate additional drilling between the Pericles and Lady Shenton lodes may result in larger open pits or even the possibility of combining the two resources. In turn this may lead to cost savings for future mining operations.

Another significant interval of 6m going 5.6 g/t gold from 108m was recorded from only the second hole drilled into the Big Babe lode which also lies below the current open pit shells. Management believes there is potential for a larger re-optimised pit to be defined via further drilling.

All composite drill results have now been received for the 2021 campaign however assays for single metre re-splits from numerous holes remain pending.

Menzies is a major historic gold filed located some 130 km north of Kalgoorlie. Nearly 800,000 ounces of the yellow metal have reportedly been mined at the project since the late 1800s at head-turning grades averaging 18.9 g/t gold.

The scoping study released by Kingwest in March seems to indicate there may yet be plenty more ounces remaining to be poured at the project.

A project life of 31 months is currently estimated based on the existing resources, with forecast net revenue after royalty payments of A$330 million at a gold price of A$2,300 per ounce and with 95 per cent recovery rates. Net cash flow from the project is forecast to be between A$95 million and A$64 million at a unit operating production cost of A$1,688 per ounce.

With the existing scoping study for Menzies already showing robust economics, the ongoing success with the drill bit is only adding further to its case with Kingwest looking to advance the project towards production. Only time will tell how many more ounces remain to be found. So far, all signs suggest this story still has a long way to run.