Developers of new residential projects in Perth are looking for ways to co-exist with established industrial activity. 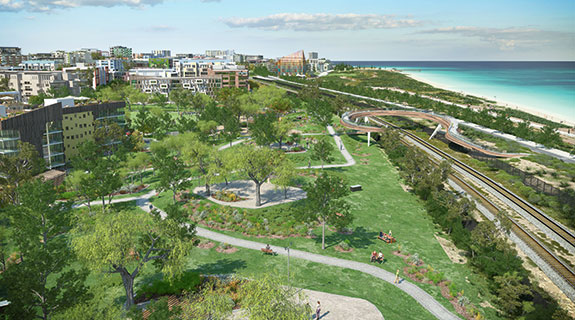 IN THE MIX: LandCorp’s Cockburn Coast development will be dissected by a freight rail line.

Developers of new residential projects in Perth are looking for ways to co-exist with established industrial activity.

When the state government committed to the Forrestfield airport rail link last year, it opened up enormous opportunities for residential land developers in Perth’s eastern suburbs.

The Forrestfield train station will be only 20 minutes from central Perth, making the area a prime candidate for a new town centre and major residential expansion.

That prospect has rung alarm bells for existing industry in the area, notably in the Forrestfield marshalling yards, which is the largest centre of heavy freight rail activity in Perth.

The marshalling yards, which is adjacent to the proposed passenger train station, has more than 600 train movements each week, creating noise, vibration and light spill 24-7.

Train movements are expected to double by 2031, according to the Freight and Logistics Council of WA.

The freight council believes residential development on neighbouring land should be avoided for the protection of both potential residents and the growth of the rail yard.

“The council’s concern is that there will be pressure to rezone land immediately surrounding the proposed passenger rail station to residential, and that this would create a major conflict with the 24-7 activities of Forrestfield,” the council said. Grain handler CBH Group contributes to the high-traffic activity in Forrestfield, on road and rail.

Commercial manager Andrew Mencshelyi said any future development should take into account the current use of the area.

“It’s important that the productivity and efficiency of the freight task through Forrestfield is not negatively impacted, as it has the potential to affect one of the key primary industries in WA,” Mr Mencshelyi told Business News.

Similar concerns arose in regard to LandCorp’s Cockburn Coast redevelopment project, which was launched last week.

The redevelopment area, south of Fremantle, will become home to 12,000 people over the next 20 years. The Cockburn project is dissected by a rail line connecting Fremantle harbour with the Kewdale industrial area.

Eight freight trains run along this line each day, and the number is expected to double as the state government strives to get 30 per cent of shipping containers off trucks and onto rail.

In its advice to government, the freight council said some parts of the proposed redevelopment were completely incompatible with heavy freight rail operations.

Brookfield Rail, which owns or operates the lines at Forrestfield and Cockburn, said the protection of existing rail freight corridors and their ability to grow was vitally important.

Brookfield said it was committed to working with other industry leaders and government to secure the best outcome for industry and the community.

This is not a new issue, nor is it unique to these locations.

In its 2014 annual report, the freight council said it prepared submissions on “some half dozen” land development proposals last year.

The question is how best to deal with the issue.

The Shire of Kalamunda is in the midst of planning a new urban centre at Forrestfield, on the back of the $2 billion airport rail link.

Chief executive Rhonda Hardy believes the new passenger train station will be a catalyst for development.

“The vision for the area includes high-density residential and commercial developments including a new district retail centre,” Ms Hardy said.

To support this vision, the shire recently completed a draft district structure plan for the station precinct, covering approximately 250 hectares.

Property developer Nigel Satterley has thrown his support behind the shire’s vision.

“It provides an opportunity to create a great master planned community, with a wide choice of housing and lifestyle options,” Mr Satterley said in a joint statement with the shire.

The freight council wants the planning process for Forrestfield North to include a wide buffer, suggesting that residential development should be at least 800 metres from the passenger rail station.

The shire’s development director, Warwick Carter, said the planning was a work in progress.

“Certainly we are aware of this issue,” Mr Carter told Business News.

“The draft district structure plan addresses a high level response to the site.

“As we develop the local structure plan around the station, we will look at options to address issues raised by stakeholders, including the buffer zone.

“Options may include the physical proximity, as well as other physical barriers or land-use restrictions to ensure that potential issues such as noise and vibration are addressed.”

Chief executive Frank Marra said the agency recognised the importance of the freight rail line early on during planning of the project.

“LandCorp also recognised the concerns of the freight council, and has undertaken extensive measures to ensure that both land uses can co-exist successfully,” Mr Marra said.

In consultation with the City of Cockburn and state government agencies, it prepared a noise and vibration strategy.

This includes a requirement for all developments within 80 metres of the freight rail line to undertake a ground vibration assessment to model the impact of vibration and ameliorate the impacts through the built form.

All buildings within 150 metres of the freight rail line are also required to undertake a noise assessment and incorporate mitigating design features.

These standards will be assessed at the development application stage by the City of Cockburn, with approval required before development can progress.

Mr Marra said Cockburn Coast was one of the first projects to incorporate these standards within part 1 of the Local Structure Plan, which would ensure high standards for future developments.

“There are countless examples of residential developments in Australia and overseas occurring along busy transport arterials,” he said.

“These developments have often historically grown without any strategic planning or assessment on the impacts on residents.

“Through appropriate site layout, design and mitigation measures the Cockburn Coast development will ensure these impacts are dealt with.”

City of Cockburn said local structure plans would be prepared for all precincts within the Cockburn Coast project, which will be a 20-year development.

Strategic planning manager Andrew Trosic said it was at that stage that the issue of noise and vibration could be comprehensively assessed, followed by further consideration at the subdivision and development stages where specific mitigation measures can be identified. 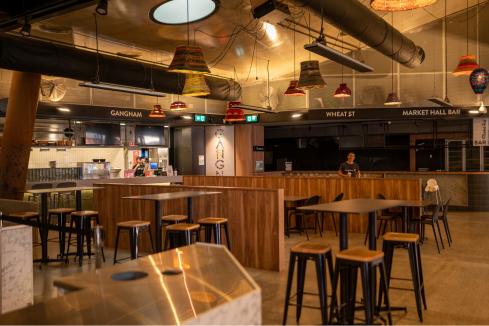