A maturing Perth market has resulted in developers creating smaller lots and a wide range of new housing choices. 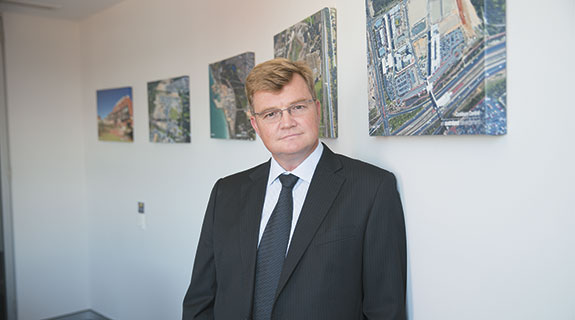 A maturing Perth market has resulted in developers creating smaller lots and a wide range of new housing choices.

Potential home buyers in Perth have more options than ever, as developers increase the diversity of their products to meet a maturing market and ease affordability pressures

The move to a more diverse product range has been in response to two factors: the changing demographic of Perth, brought on by the fact that about 60 per cent of the city’s population growth is coming from overseas and interstate migrants more used to higher-density living; and the ever-present quest for more affordable housing.

While families with children still prefer large, four-bedroom houses with substantial yards, there is increasing demand from singles, couples without kids and downsizers for townhouses, villas and apartments.

Australand WA residential general manager Tony Perrin said the choice available to consumers was greater than ever, and had been facilitated largely by the state government’s planning reforms.

“You can’t create new dwelling forms or broaden consumer choice with innovative product offerings without the ability to get approvals and having planning and design flexibility,” he said.

“A lot of the restrictions rest in outdated and overly prescriptive local and state government policies.

“When you can design with flexibility, submit them and get approvals, you open up the door for change and allow the developer to broaden choice of dwellings for consumers.

“With the government’s recent announcements there is continuing support to look for simplification and reductions in complexity of planning processes, which is a positive step to supporting the opportunity for innovation and change.” 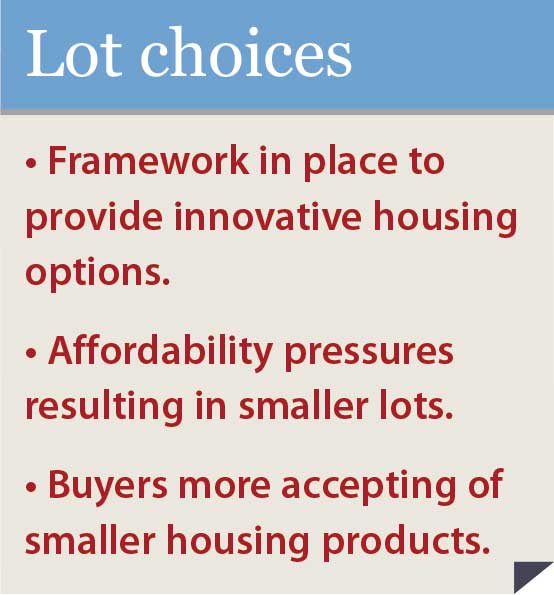 The result has been a sustained reduction in the average size of lots being produced, down to around 410 square metres at the end of last year, a major contrast to the 2004 average of 564sqm.

However, according to the Housing Institute of Australia, that has made Perth the most expensive land market in Australia on a per-square-metre basis, with a median around $650/sqm.

That price, according to Golden Group managing director Andrew Sugiaputra, was largely determined by the developer’s acquisition cost.

“From a developer’s point of view, the acquisition cost is increasing all the time, so they have to try to apportion that,” Mr Sugiaputra said.

“But developers are providing what most people want, and that comes down to price range.

“If the acquisition price is high, and people can only afford so much, the size of the block comes down.

“It comes down to affordability.”

Urban Development Institute of Australia WA executive director Debra Goostrey told a recent Australian Property Institute forum there was a prolific roll out of affordable land options by developers across Perth – they just happened to be smaller lots than what had been historically offered.

Ms Goostrey, who described the range of product available as ‘radically different’, said the affordability debate was largely about buyers’ expectations, particularly for first-time purchasers.

“It depends on your expectations of what your first home should be,” Ms Goostrey said.

“When people 30 or 40 years ago were buying their first home, it was likely going to be on a modest block of land and a modest house and that’s what we’re doing today.

“There are more two-bedroom houses on smaller lots and people can afford them.

Mr Perrin said collaboration between developers and builders was closer than ever in response to the affordability pressures, with house-and-land packages a clear pathway to heightened affordability.

“Land subdivisions are going to forever be under pressure to provide more affordable pieces of land, the only way to adjust that is via reductions in land area, and more packaged, integrated and value-engineered delivery of completed homes,” Mr Perrin said.

“Builders and developers are becoming increasingly attuned to the importance of optimisation of construction time and cost when working on smaller lots, and that is provided by volume building, as opposed to individual house contracting.”

Peet managing director Brendan Gore said the developer was responding to the changing demand profile by rolling out more townhouse and apartment products close to the town centres of its land subdivisions.

Mr Gore said the developments were predominantly around three to five storeys or townhouse products, which had opened up new markets for the company.

“It’s a different product offering … there’s strong demand out of singles, young couples with no kids, that have all the amenity around what they need and want to be close to family who are living in the existing or surrounding estates,” Mr Gore said.

“It’s a price entry point that they can afford, so it meets that demand.

“It also allows us to target the investor market more than what we do with our normal estates.

“We are seeing good, solid demand across the board at Wellard and at Shorehaven in particular; they are the two projects that we’ve recently launched, and we’re looking to roll that over into the rest of our estates, both here and in the east.”

However, Real Estate Institute of WA president David Airey aired serious concerns for the resale value of the new products.

Mr Airey told the API forum anecdotal evidence from REIWA members was that developments with homes tightly compacted together were a tough sell for real estate agents.

“The question is ‘can we sell them, can they be sold again’,” he said.

“It’s easy to sell them when they’re house and land packages but they’ve never been tested on the second market.

“I’ve been around for a few years, and I remember some of the outer suburbs, Merriwa comes to mind.

“They built a lot of houses out there and you simply couldn’t sell them when the downturn came in the early 1990s.”

Cedar Woods managing director Paul Sadleir said developers were simply responding to consumer demand and the notion that a home had to have four bedrooms, two bathrooms and a large yard was diminishing.

“People are now quite happy to buy a two-bedroom townhouse in the knowledge that we’ve got an ageing society and there are empty nesters coming through,” Mr Sadleir said.

“You’ve got to be able to respond to changing conditions so we like to incorporate a range of product in all of our estates.”