Image Resources has mapped out ultra-high-grade heavy mineral sands mineralisation for a further 2km northwards at its Boonanarring mineral sands project near Perth. The company has now completed infill drilling across all proposed mining blocks at the operation, with assay results expected shortly, which should allow a full update of mineral resources and ore reserves for the project in the December quarter of this year. 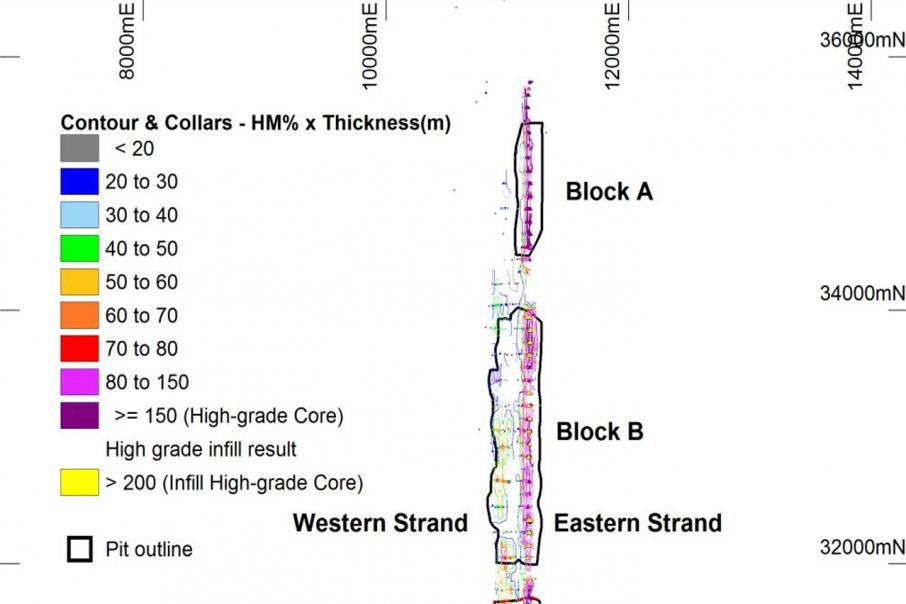 Heavy mineral sands miner, Image Resources, has confirmed that a very high-grade “core” of zircon-rich mineral sands mineralisation at its flagship Boonanarring project near Perth, WA, extends to the north of the current mining block.

The company recently completed close-spaced drilling across the eastern strand of the Block B area, unearthing exceptionally high-grade, shallow results including 4 metres grading 56.9% heavy minerals, or “HM”, content from 36m down-hole, 3m @ 66.8% HM from 37m and 2 metres at a blazing 76.7% HM from 36m in separate drill holes.

Initial confirmation of the ultra-high-grade tenor of the eastern strand came from positive mining reconciliation from the Block C area further south, with the new work proving up the continuity of the zone over the full 2km strike length of Block B.

Management said that the arithmetic average of all the drill lines completed for Block B shows a width of just under 26m, a thickness of 2.5m and an ore grade of 42.1% HM.

The results are part of a broader drilling campaign designed to re-assess the company’s mineral resources and ore reserves for Boonanarring, which could potentially get a significant boost, based on the infill drilling assay results to date.

The drilling campaign extends across the eastern strand of Blocks A, B, C and D at Boonanarring – over 9km from north to south – and will allow Image to fully update its resource and ore reserve position in the December quarter of 2019.

Results from drilling at Blocks A and D are pending at this stage.

Image’s Boonanarring project is one of the highest HM grade, zircon-rich mineral sands projects in Australia, with construction completed in May 2018.

The plant was commissioned in November last year, with the first production in early December and ramp-up to full-scale production completed by January 2019.

First revenue was receipted the same month and the operational performance exceeded budget during the first two quarters of this year, off the back of higher revenues and lower costs, attributable to the HM ore grades being above forecast and guidance.

And the product is in high demand too, with the company signing additional sales agreements its existing Chinese offtake partners in late May.

This week’s revelation that the Block B HM ore grades are likely to eclipse the original ore reserve numbers should enable Image to continue achieving positive cash flows, sustain profitability and allow it to self-fund exploratory and resource development drilling moving forward.

Total ore reserves for the combined Boonanarring and nearby Atlas projects are tabled at 29.3 million tonnes grading 7.5% HM.