Fazio to knock ’em out with Box & Bike

Boxing champ Rai Fazio is creating an international rumble in the world of group fitness. 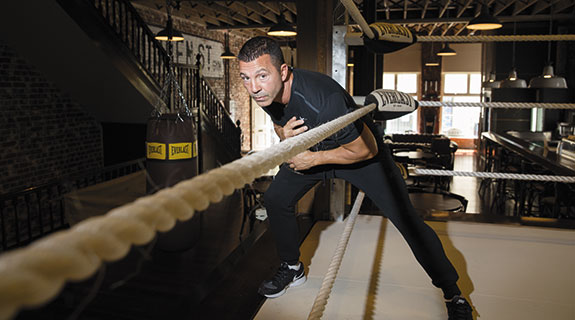 OLD SCHOOL: Rai Fazio says it was important to get the look and feel of Queen Street Gym exactly right. Photos: Attila Csaszar

Boxing champ Rai Fazio is creating an international rumble in the world of group fitness.

Boxing champion-turned filmmaker-turned inventor Rai Fazio has embarked on a new mission – using his Queen Street Gym to promote a new fitness class he hopes to build into a worldwide phenomenon.

Stepping into the gym is akin to stepping back in time, or on to a film set, with Mr Fazio sparing no expense to ensure it has an authentic underground feel, inspired by legendary boxing clubs in New York City.

The gym itself is housed in a heritage building on Queen Street, a synergy with Queens in New York, which Mr Fazio says is an important part of its authenticity, while the fitout is estimated to have cost around $4 million.

Punching bags, sourced direct from the US, are genuine Everlast brown leather, exposed brickwork, ceiling struts and barn lights hark back to an earlier time, while the mainly decorative boxing ring in the centre of the gym has a traditional three-rope turnbuckle system, long since replaced in professional circles by the modern four-ropes.

“It was really important for me to make it look like something from the past,” Mr Fazio told Business News.

“Apart from the Boxmasters, there is nothing in here that’s modern.”

The Boxmasters Mr Fazio refers to are his invention – a boxing training machine he developed following the 2008 release of his film, Two Fists, One Heart, to ease the rigours of training competitive boxers with traditional punching mitts.

Mr Fazio created the Boxmaster system, which retails for $3,300, in collaboration with international fitness equipment manufacturer Star Trac, which is also the world’s largest manufacturer of spin bikes.

Demonstrating the Boxmaster at trade shows in the US gave Mr Fazio the inspiration to develop his new fitness regime, called Box & Bike.

“What I noticed was that spinning was huge, it’s the world’s biggest group fitness session,” Mr Fazio said.

“So I went back to the warehouse in the US, dug out five Boxmasters and five spin bikes and we tested Box & Bike at the Star Trac offices in Irvine.”

“After three rounds, the Star Trac master trainers were all saying that was the hardest thing they’d ever done,” Mr Fazio said.

Mr Fazio said he realised the potential for bigger things when he first discussed the idea of Box & Bike with Mr Huston during a training session. REVOLUTIONARY: The Boxmaster can be used to train people from rookies to professional boxers.

“I told him about the concept and he said ‘that’s got franchise written all over it’,” Mr Fazio said.

“We did a deal on the building and a deal on Box & Bike, where we went straight down the middle.”

The plan now, Mr Fazio said, was to evaluate the success of Box & Bike for the next 12 months, while at the same time formulating the best plan of action to franchise the system.

“Long-term, you could put this anywhere,” he said.

“But with franchising you need to be able to press a button on the computer and say here’s a marketing plan, here’s our stats for the last year, so in about 12 months we’ll look at it.”