Farm sector stuck in power past

Necessity is often the mother of invention in Australian agriculture, which is why the lack of support for renewables from many in the farm sector is perplexing. 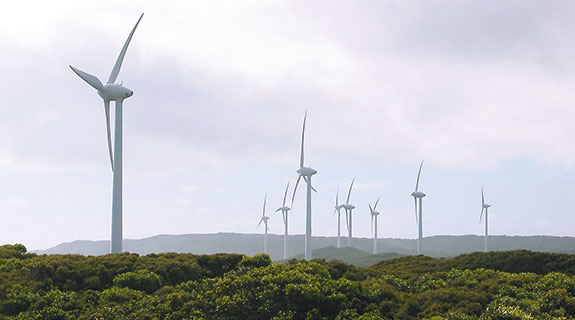 OPPORTUNITY: With an abundance of renewable energy sources and vast open spaces, renewables and Australia would seem a perfect fit.

Necessity is often the mother of invention in Australian agriculture, which is why the lack of support for renewables from many in the farm sector is perplexing.

I once worked for a lovely country bloke called Andrew, who had a fondness for the expression ‘just like a store-bought one’.

He explained the expression during one of those slightly awkward pauses in the staff kitchen, telling me it came from his childhood growing up on a wheat and sheep farm.

“Dad was forever coming up with inventions to solve everything from broken fences and runaway sheep to an unhappy wife,” he explained.

“Most of these solutions involved lengths of fencing wire, reconditioned engine parts … they didn’t generally work, at least not for very long, but my dad never tired of annoying mum by pulling her away from her own chores to witness his latest, great invention.

“‘There, just like a store-bought one’, he would shout above the sputter and wheeze of his latest creation.”

What captured me about this story (and Andrew’s dad for that matter) was his flinty, dry sense of humour and the creative endeavors it masked.

Inner-city urbanites don’t have the monopoly on creativity, and the isolation of rural Australia has proved a natural incubator for ideas.

Andrew’s dad subtly shifted my city-ignorant view of farmers as blokes in khaki workers’ shirts and grubby shorts who drove around in big, dirty machines hoping for a break in the weather.

Farming has always pitted hard work against the environment, an uneven match that has spawned countless creative solutions, big and small, to improve the odds.

In this age of big data, farmers use sophisticated software to analyse huge amounts of information to ensure they get the most out of their land for cropping or running livestock.

In much the same way information is reshaping the media, technology and data have forever changed the way farmers use their land.

The University of Western Australia and the CSIRO are using drones as well as thermal and multi-spectral cameras to read the light signature of plants and identify frost-damaged crops.

This information is vital in speeding up business decisions for farmers grappling with the cost of frost-damaged crops across Western Australia’s Wheatbelt.

Conversely, another study out of UWA into the role of drones in monitoring pasture growth has revealed that unmanned aerial vehicles are not as accurate as the 20-year old ‘rising plate meter’ measurement technique.

So we’re still some distance from mini fighter jets replacing generations of hard-earned experience and the intellectual property it entails.

And without thoughtful application, these new technologies are about as useful as one of Andrew’s dad’s inventions.

The investment has to be carefully balanced against the return to ensure drones don’t end up being costly toys.

Farmers are good at sorting the wheat from the chaff, which is why I’m surprised such a rift has occurred between farmers and parts of the renewable energy sector.

Obviously persuading the farm sector of the value of renewables is a tougher conversation when oil is at $US30 a barrel, but what I’m driving at is the willingness (or apparent lack of in many cases) of farmers to adopt new technology for renewable energy.

One of the most iconic images of Australian agriculture is the windmill, and yet farmers have railed against wind turbines across the country.

Working the land every day you get a far better understanding of the challenges of climate change, so why aren’t farmers leading the charge for renewable energy?

Now that Tony Abbott is no longer prime minster and his aesthetic concerns with wind farms no longer make newspaper front pages, perhaps farmers can help wean us off fossil fuels and drive the development of the renewable sector in Australia.

The appetite for Australia’s clean, green produce is driving productivity as well as investment in agriculture, so why not use this moment in history – because that’s what it is. Make no mistake, there are many emerging markets out there working hard to steal away China’s appetite for Australian produce – to find creative ways to make renewable energy work?

We should be leading the world in terms of renewable technology, and farmers have traditionally shown a willingness to embrace technological change and harness it to make their businesses more successful.

So back to Andrew’s dad and his endless inventions.

None of them have won any awards yet or significantly altered the course of wheat and sheep farming techniques, but he’s just one of thousands of men and women on farms who could drive a new wave of innovation.

And that’s the sort of progress that even inner-city hipsters can understand.