ASX listed DroneShield has the tiger by the tail in the anti-drone market. The ASX junior with a market cap of just $30m has carved out a suite of products that both detect and disable unmanned drones. The company’s stationary mounted “Drone Sentry” looks like a sci-fi version of ET and the “DroneGun” looks a bit like the ultimate warrior’s hand held machine gun – albeit it doesn’t shoot bullets. 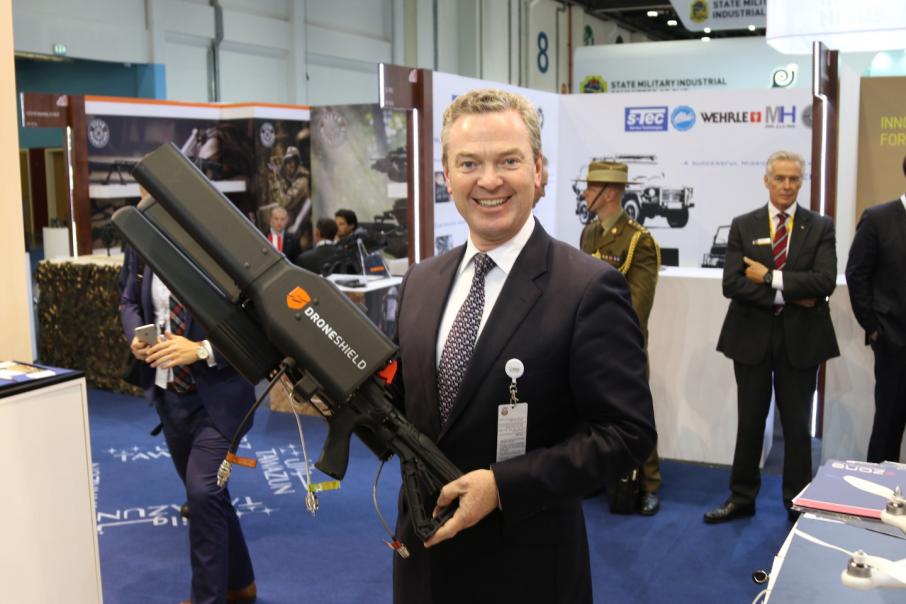 Smart operators around the world are now regularly grabbing hold of and embracing lucrative new markets that are seemingly presenting themselves on an almost daily basis.

The unmanned drone market, estimated to be worth around $127b annually, is one such market that is presenting a myriad of exciting opportunities right now for savvy businesses.

Paparazzi are using them to swoop on celebrities and real estate agents are using them to sell properties. In fact there looks to be no end in sight for those first to market operators that are breathing life into this amazing industry.

Despite their obvious commercial advantages however, not all are happy about the rise and rise of the unmanned drone.

For example, how do prison guards stop them from dropping drugs over their prison walls and what if it’s the enemy and not the good guys using them on the battlefield ?

How do celebrities protect themselves against the prying activities of journalist controlled drones ?

A small ASX listed company with a market cap of just over $30m appear to have developed answers for these questions.

They have created and harnessed a significant opportunity in the “anti-drone” market that is every bit as big as the drone opportunity itself.

Sydney based DroneShield have developed a suite of products that can both detect and disable unmanned drones.

The company’s stationary “DroneSentry” looks like a sci-fi version of ET and the “DroneGun” looks a bit like the ultimate warrior’s hand held machine gun – albeit it doesn’t shoot bullets.

When aimed at a drone and activated from over 2km away, it directs the drone to return to its launching point or forces it to simply undertake a controlled vertical landing.

The DroneSentry boasts a range of drone detection methods including radar that is accurate up to 1.5km, acoustic detection up to 500m, RF detection up to 4.5kms and a sensor system that is also capable of producing thermal imaging.

DroneShield’s anti-drone early mover advantage is extreme in an industry that is still largely focussed on the drone market itself.

Whilst their technology has obvious civil and commercial uses, the company has been knocked over in the rush from military and law enforcement outfits around the world who are looking to gain an advantage over the enemy by detecting and ultimately disabling their drones.

Some notable customers to-date include Middle Eastern military units who are locked in mortal combat with ISIS.

ISIS are now using drones to great effect by dropping grenades on allied troops using $500 off the shelf drones.

Special forces units attached to G7 countries and Asian Homeland Security departments looking to protect themselves from the threat of terrorism have also sought out DroneShield’s products.

American FBI Director Christopher Wray recently put the fear of God into a US Senate committee telling Senators that terrorist related activity involving the use of drones is “coming here imminently”.

During the same hearings, US National Counter-terrorism Center Director Nicholas Rasmussen said; “Two years ago this wasn’t a problem, one year ago it was an emerging problem and now it’s a real problem.”

With the issue of drone related security breaches now top of mind for Governments around the world, DroneShield say they are currently working on a massive pipeline of specific short terms sales enquiries and opportunities across almost 3 dozen countries.

Andrew Carolus is the Managing Director of the Aerospace and Defense practise at big American investment bank Mesirow Financial.

Mesirow is an 80 year old business with 600 employees, 17 offices around the world and USD$33b under management.

When asked about the opportunity for DroneShield Carolus says; “DroneShield’s industry practically did not exist until a couple of years ago, yet today, detection and mitigation of unmanned aerial vehicles is a hot button issue for the defense and security establishment.”

“The defense and security industries are seeking to capitalize on the need for an effective working solution, which is what DroneShield, one of the early movers in the space, offers to the larger players.”

DroneShield now have 60 distributors in 50 countries that will help them carve out their niche in the globally burgeoning drone market place.

With 12 million drones expected to be operating around the globe by the year 2020, it is not out of the question that DroneShield’s detect and disable anti-drone products could become as common as the household security system in time.