Coming off second best when national costs are ‘shared’

Rising gas prices on the east coast have highlighted yet another anomaly in the GST structure that costs WA. 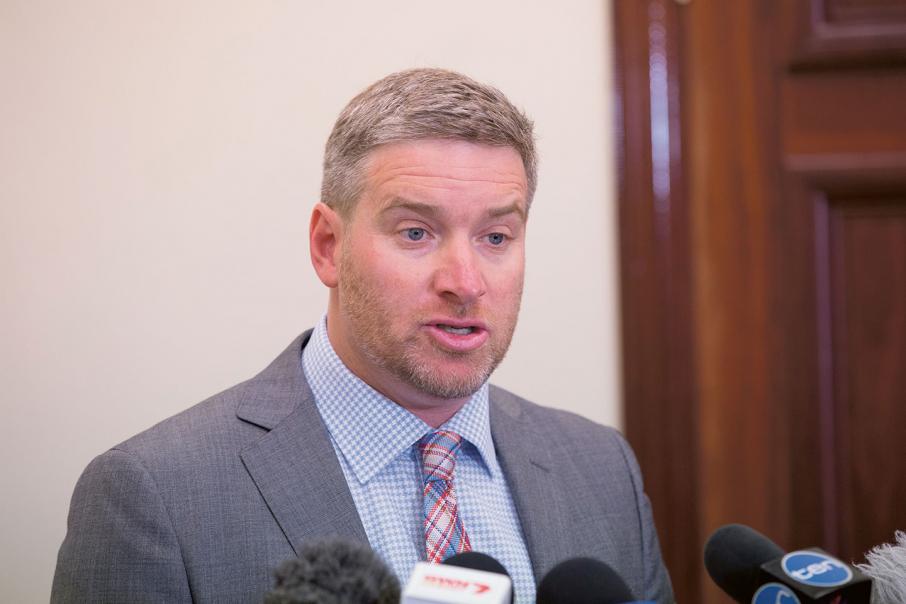 Brendon Grylls says the GST allows Victoria to benefit from WA’s onshore gas production while it is banned in that state. Photo: Attila Csaszar

Rising gas prices on the east coast have highlighted yet another anomaly in the GST structure that costs WA.

The energy sector in the east remains in crisis, with Victoria appearing likely to suffer a similar fate to Tasmania and South Australia, which were hit by supply and price issues last year.

For Western Australians it would be easy to be smugly thankful that the Nullarbor’s great divide has kept us separated from the power dramas occurring on the east coast.

But such a position belies the fact that this state, through the GST, pays for the costly choices of others, including populist energy policies.

Victoria’s moratorium on onshore gas drilling, introduced in 2012 by the Baillieu Liberal-National government, expanded on by his successor, Denis Napthine, in 2014, and continued by Daniel Andrews and Labor, is shouldering a considerable proportion of the blame as industry feels the sting of rising gas prices.

Major employers in this once thriving but heavily protected manufacturing hub are voicing their concerns about the impact of short-term energy prices rising as much as 100 per cent, largely driven by higher gas prices.

Exporters from gas-rich states such as Queensland are pushing prices up; but with Victoria and parts of NSW banning onshore gas development, many new, closer and more competitive sources of supply have been shut out of the market.

The Australian head of oil giant Shell, Andrew Smith, pointed to the same problem when he deflected the issue from existing producers.

“It is the Andrews government’s ban on onshore gas production that will lead to price hikes to Victorian manufacturers – and this will cost jobs in Victorian factories,” Mr Smith said.

If this was just a Victorian issue, WA might be able to look the other way. After all, the federation was designed to allow states to go their own way, allowing policy diversity to provide the best path to success.

But as Nationals WA leader Brendon Grylls highlighted earlier this week, perverse incentives in the structure of the GST allow Victoria to benefit from WA’s onshore gas production while banning it in their own backyard.

“Why would (Victorian Premier) Daniel Andrews be so dumb as to facilitate new gas development?” Mr Grylls asked.

“When he looks to the WA experience, where we facilitated an unprecedented expansion of our iron ore and LNG sectors at great cost to our state budget, only to be hung out to dry by the Commonwealth via a GST carve-up where 88 cents of every royalty dollar is lost to states like Tasmania and Victoria that lock up their natural resources, I can understand why he wouldn’t bother.” 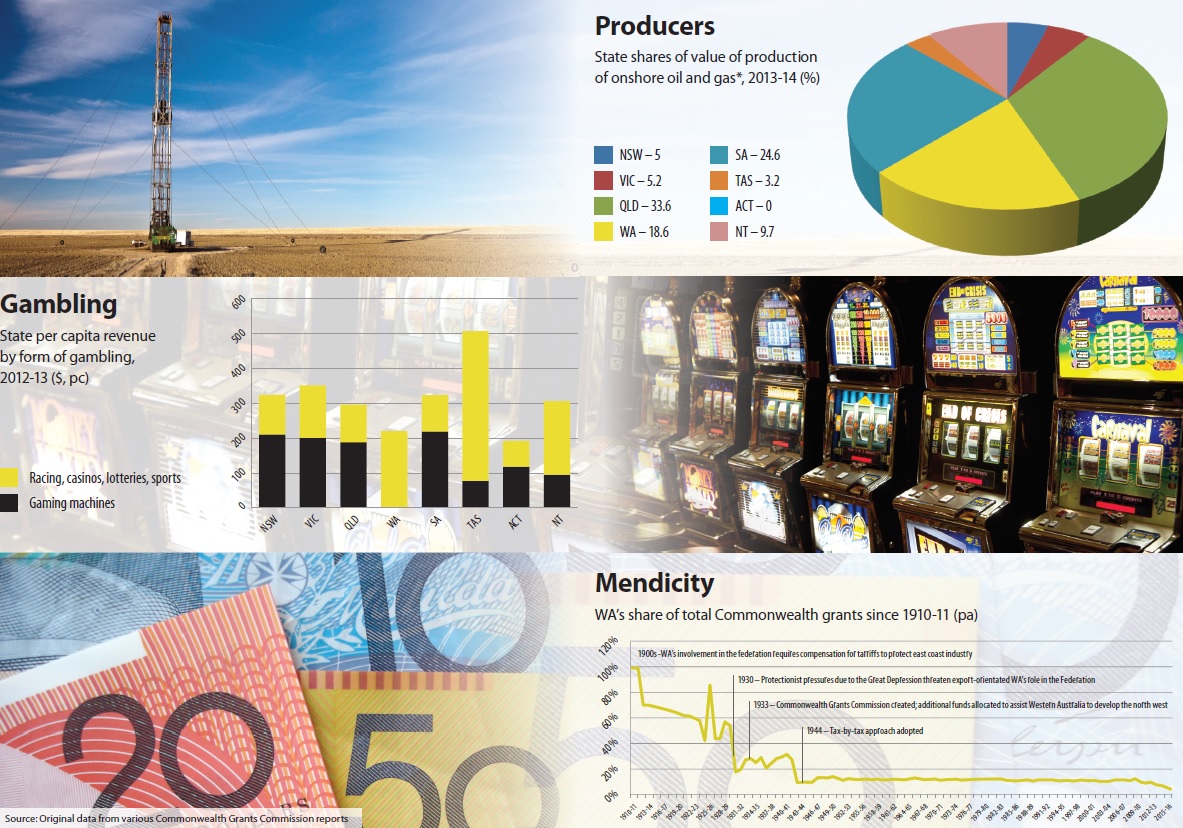 It is a position highlighted by this newspaper in the past, as has been the example of WA’s contrasting experience when it comes to gambling.

While Victoria financially benefits from its dubiously conceived policy against fracking, WA annually counts the cost in the GST carve-up of its decision to go it alone on banning poker machines from all venues except the casino – a stance viewed as enlightened by almost every study into the community cost of these devices.

In terms of the methodology by which the GST is calculated, WA is deemed to have the same gambling revenue – based on taxes on racing, pokies, lotteries, casinos and sports betting – as other states.

According to the Commonwealth Grants Commission, average national gambling revenue per capita in 2012-13 was $309. That is what it was assumed each state had the capacity to earn per person in that year, even though WA’s was 30 per cent below this at $220 per capita, a difference that effectively means this state chooses to forgo $200 million in GST revenue. Meanwhile, pokie-mad Victoria generated gambling revenue of $351 per capita, which means it earned, again through policy choices, $250 million more than the average, a bonus which is not recognised as part of the GST carve-up.

Mr Grylls is equally angered by the federal government’s inability to address the structural issues that have allowed Victoria and other states to choose to shirk their part in developing resources, while at the same time benefiting from WA’s growth.

While gambling policy in WA has a well-researched legitimacy, bans on fracking – also a potential policy here – do not. While the internet is awash with misleading news and propaganda videos about gas disasters, there is no evidence of any major calamity.

While populist movements such as Lock the Gate and other activists cite the precautionary principle to stop exploration, they are relying on stories of foreign and interstate disasters that don’t exist or are exaggerated beyond recognition. Certainly there have been some errors in aquifer drilling and chemical spills, but decades of lessons have contributed to safety improvements, just as they have with almost any industry.

The nature of onshore gas extraction – tight fields that require fracturing of the rocks in a localised area – means that major disasters such as Exxon Valdez and Deepwater Horizon are impossible.

The challenge for any restructuring of the GST is to put a value on potential revenue streams that are subject to ideological or populist bans – be it forms of gambling, infrastructure funding such as road tolls, or development of resources, including gas, minerals, forests and fishing.

The federation has form in this area. When it was formed, the federation acknowledged WA’s export-oriented, tariff-free economy. In order to form one nation, the eastern states agreed to compensate WA for their protectionist policies around manufacturing.

Initially, WA was the only recipient of these grants, which waned over time, except for the Great Depression era when the Commonwealth Grants Commission was created and increased calls for protection against imports meant WA received further compensation.

Historic data show that despite WA being labelled a mendicant state until recently by so many detractors, the fact is WA has taken no more than its per capita share of grants (including the GST) since the 1940s, even though tariffs and protectionist policies for east coast industries persisted for decades beyond this time, including current major defence contracts. Lately, of course, WA has received less per capita.

It appears that, after some special funds to develop the north-west in the 1930s, the grants structure was revised to reallocate funds on the basis of each state’s ability and willingness to tax economic activity.

WA’s unwillingness to allow pokies, therefore, comes at an economic cost. The evidence on this appears clear; due to a relatively high level of substitutability, a ban on these machines shifts about half the potential revenue to other gambling forms.

The commission figures show WA punches above its weight in racing, casino and lottery income. So, fortunately for WA, the cost of the policy is mitigated by about 50 per cent.

Gauging the cost of a gas moratorium is much harder. Gas exploration and extraction is risky business, and onshore projects not only come with many geological challenges but also, increasingly, costly approval processes accompanied by, at times, aggressive protests.

Assessing the extent of gas reserves and the likelihood of their commercial exploitation is much harder than assuming Western Australians would, on average, spend an additional $100 a year each on pokies if they were available in their local clubs and pubs.

Then again, if leading Victorian manufacturers can start putting a price on this political stance in the form of energy costs, perhaps the Commonwealth Grants Commission could too.