The University of Western Australia’s new vice-chancellor plans to shift the institution’s focus. 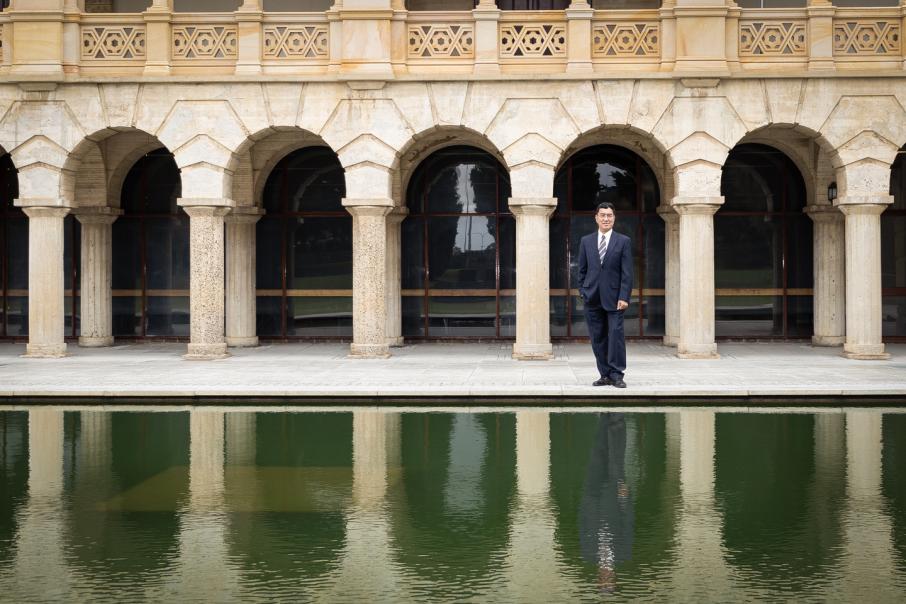 Amit Chakma says he will not be driven by international rankings. Photo: Gabriel Oliveira

Amit Chakma doesn’t pull any punches when discussing the challenges he faces in his new role at the University of Western Australia.

“Research-intensive universities, as a group, have significant weakness in terms of the attention, the care we have been able to give to our students,” Professor Chakma told Business News.

“I want to bring a renewed focus on the student experience.

“For a comprehensive public university, that is important.”

Professor Chakma arrived in Perth after more than 30 years in Canada, most recently spending a decade running Western University, formerly the University of Western Ontario.

“I have seen what it has done at my previous university, in a similar situation to UWA,” he said.

“The university made a strategic decision to differentiate itself by really paying attention to student learning, the learning environment, the student experience.

“That has been an extremely successful strategy.”

Professor Chakma said one of his biggest challenges at Western was getting phone calls from disgruntled parents, unhappy their child could not get in.

That was far outweighed by the benefits, however.

“Guess what? When you give students a very positive learning experience, their loyalty grows, they become engaged ‘alums’,” he said.

“They help you in any way, shape or form, not the least which is fundraising.”

Professor Chakma disputed suggestions there was tension between student experience and a research focus.

“People think there is, but the answer actually is no,” Professor Chakma said.

But he did acknowledge there was tension in resource allocation, for instance between investing in research labs or renovating classrooms.

“That’s a choice this institution has been facing and will continue to face.

Based on this interview, you know where my priorities lie,” Professor Chakma said.

Professor Chakma has come to his new role as UWA vice-chancellor with considerable knowledge of Australia, after being a frequent visitor since the early 1990s.

He and his wife have relatives from Bangladesh who have moved to Australia, while his brother obtained his MBA in Sydney.

Another link was that the chancellor at Western University between 2015 and 2018 was Australian businessman Jack Cowin, who famously established the Hungry Jack’s fast food chain in Perth in 1971 after migrating from Canada.

“As I took on leadership roles in Canada, I was a champion for international education,” he said.

“I looked to Australia as a model country.”

That led to several trips to Australia, where he met with government and business leaders.

Professor Chakma said pushing UWA higher on international rankings was not a priority, signalling a marked change from the university’s aspiration some years ago to secure a spot in the top 50.

“They are very important, but I will not be driven by those,” he said.

“Those who chase rankings may not do all the right things that need to be done.

“Those who do the right things and pursue excellence actually rise in rankings, so it’s the action that matters.”

Professor Chakma cautioned that universities could be misguided by rankings.

“All those international rankings measure things that are easy to measure,” he said.

“One of the weaknesses [is] they are still not able to measure the quality of teaching and the student experience.”

Professor Chakma said he planned to take a longer term view on the university’s development.

“We need to focus on the students, get the fundamentals right; and if the ranking doesn’t rise during my five-year time, I am happy with that, because we are laying the foundation,” he said.

Professor Chakma said UWA’s founding charter, which called on the university to serve the people of WA, was a significant influence on his priorities.

In pursuit of that goal, he was keen to explore opportunities to grow UWA’s online offering so its courses were accessible to people across the state.

He was also looking for opportunities for UWA to support the state government’s economic blueprint, across everything from agriculture to mining and energy.

Professor Chakma suggested that, in addition to contributing its academic and research expertise, UWA could deliver in broader ways.

“Having a great university is a good profile in terms of marketing the state,” he said.

“The first thing they will ask is: do you have universities that can provide us with the talent pool?”

Having left his native Bangladesh to study engineering in Algeria before migrating to Canada, it is not surprising that Professor Chakma champions international education.

International students and their visiting families contribute $2 billion annually to the WA economy, and the new vice-chancellor wants to grow that figure (after the COVID travel restrictions have been lifted).

Professor Chakma said UWA, and the state as a whole, would benefit from partnering.

“We may think we’re big but, even as a country, we are small,” he said.

“You will have greater impact if you work in partnerships.

“I used to say the same thing in Canada.

“One of my priorities will be to reach out to our partners, universities, business, government, others.”

He cited the recent launch of the $10.5 million Western Australian Liver Cancer Collaborative as a great example.

It will include more than 50 researchers from UWA, the Harry Perkins Institute of Medical Research, and Curtin University, as well as specialists from Perth’s three main teaching hospitals.

The research centre has been backed by a $5 million grant from the Cancer Research Trust, while Minderoo Foundation is providing $2.5 million and Curtin University $1 million.

A further $500,000 is being contributed by each of UWA, the Harry Perkins Institute of Medical Research, the WA Health Department and the Sir Charles Gairdner Hospital Foundation, while the McCusker Charitable Foundation is contributing $300,000.