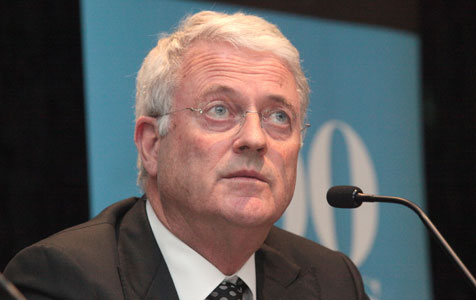 Woodside Petroleum and National Australia Bank chairman Michael Chaney says political instability in Canberra is exacerbating a decline in consumer confidence driven by the slowdown in the resources sector.

Speaking at a Committee for Economic Development of Australia forum in Perth, Mr Chaney said the combination of a decline in terms of trade and an extended election campaign had created a “perfect storm” of anxiety in the community.

“We’ve had a reduction in terms of trade which is causing a reduction in confidence but at the same time, a nine-month election campaign,” Mr Chaney told guests.

“Election campaigns always cause people to keep their hands in their pockets.

“I would hope that after September, whatever the result is, people are a bit more confident and start spending again.”

The latest survey of consumer confidence by Curtin Business School and the Chamber of Commerce and Industry WA showed consumer confidence had slumped to a record low, with just 10 per cent of respondents expecting the economy to improve over the next three months.

Amid a backdrop of growing uncertainty in the mining sector, Mr Chaney said non-resources industries had been doing it tough for a number of years.

“For many of the people…who are not involved in the resources sector, they will have been feeling pretty low, I think, for the last few years,” he said.

Mr Chaney said it was unrealistic to expect a return to the high terms of trade seen in previous years, and warned governments would be forced to adjust their spending accordingly.

However, he added there were positives to be seen in the potential for floating LNG plants, and in technology research developments such as the Square Kilometre Array project.

“Perth ought to become the centre for floating LNG technology in the world and I think it will if we play our cards right,” he said.

“Certainly in Woodside’s case, if we proceed with that at Browse, we’ll be insisting that the technology is located here in terms of design and so on.

“What you find is if you do then have a centre of excellence in that technology, it spins off other things.”

“Australia has become what it is today through foreign investment, through the whole of its history,” he said.

“There isn’t the capital in Australia to develop the projects that need developing.

“I think we ought to be doing everything we can to encourage foreign investment.”

Macquarie Group WA chairman Mark Barnaba said he was confident the state's strong investment pipeline would provide insulation from a downturn in mining but questioned whether most households had benefited from the boom.

"It's hard to see how over that last five years, retail and general confidence has been where it's been given how we've done," Mr Barnaba said.

"You have to query the extent to which the wealth has had an impact on households."