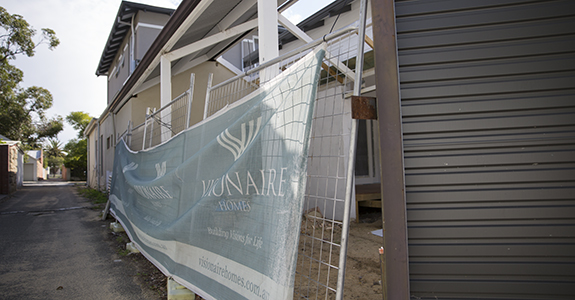 Complaints against builder Capital Works Constructions, which collapsed this month owing $8.5 million, date back to at least 2013, with the first of dozens of formal grievances lodged with the industry watchdog in that year.

Commerce Minister Michael Mischin confirmed in parliament earlier this month that the Building Commission was asked to investigate a general breach of building laws in 2013 by the company, led by Joshua Coffey and his wife, Emma.

While the commission would not reveal details of what the breach entailed, the investigation, and another in 2015, concluded no offences had been committed.

However, the commission is still investigating a total of 39 complaints, including the standard and quality of work, alleged breaches of building contracts, and disciplinary issues. Of those, 29 were made this year.

On a typical house build, progress payments are made when the slab is put down, at plate (when the walls go up), when the roof structure is built, and at lock-up, when the home is ready for interior finishing.

Usually, one of the largest payments is made at lock-up, because of the high cost of interior finishes such as flooring, paint, cabinetry, and window furnishings.

Industry sources say the progress payments made by Freelife clients appeared to be outside the normal spectrum of typical house construction.

One client told Business News they had one $20,000 payment left on their $150,000 house, at which progress had ceased in July last year, when it reached the lock-up stage.

“There is no way a three-bedroom house can be finished for $20,000 at lock-up,” an industry source said.

Administrators at Deloitte estimate tradespeople and suppliers are owned around $8.5 million by Capital Works Constructions, which also built luxury houses under the banner Visionaire Homes. Visionaire Homes also developed an apartment building on West Perth’s Bellevue Terrace, on land purchased by JGQ Commercial Pty Ltd, of which Mr Coffey is a director and the sole shareholder, in June 2009 for $11.9 million.

There have been eight apartment sales by JGQ Commercial at The Bellevue since the building was developed, totalling $25.8 million.

However it is not clear how much of the portfolio is available to assist the repayment of Capital Works Constructions’ unsecured creditors.

It is understood unsecured creditors were told by the administrators last week there was little likelihood they would be repaid.