Bring back the barracks

Perth has eight and a half years in which to reconnect the city's CBD to its west end with an exciting new development, writes Andrew Toulalan. 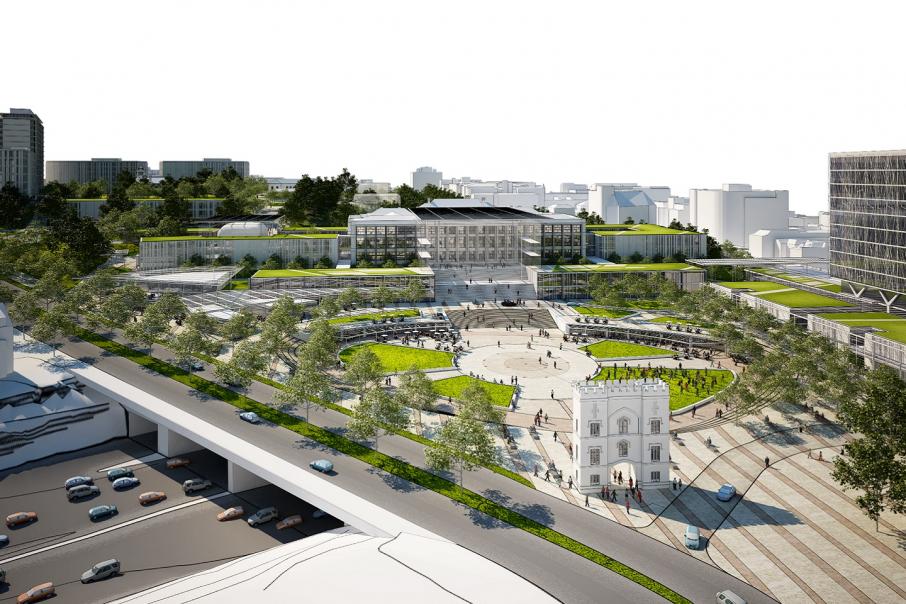 I’m also a hardworking candidate in this Saturday’s council election for the City of Perth, campaigning on a platform of integrity, honesty and good character.

The people of Perth want a united council that listens to them.

Today, though, I’m not here to talk about the council or the issues of the election as we’ve heard for the past five weeks and will likely hear more of in the month's ahead, as the new council settles into its business and the new lord mayor makes their mark on our fair city.

Exciting times and good things are coming, whoever is elected.

Continuing with that spirit of enthusiasm, I’d like to let you in on a passion project of mine that can speak to generations to come.

I can’t take credit for it and nor do I wish to.

A good idea is a good idea and it doesn’t matter who takes the credit, as long as it sees the light of day.

If I can help this idea get some traction by raising awareness, restarting the conversation and bringing people on board, then my job here is done.

Perth has a very important birthday coming up.

In 2029, our city and state will celebrate its bicentennial of 200 years since the modern founding of Perth, adding to the 50,000 years of pre-settlement history of the Noongar people, the first Australians.

We’ve come a long way in 200 years and we have a chance to create a lasting reminder of who we are, where we’ve been, where we are going and who we can be as a united people.

Let's take a moment to reflect on what it means to be a Western Australian, past, present and future.

In 1979, we celebrated the 150-year anniversary (sesquicentennial - if you’d like some verbal gymnastics today) since founding, known as WAY79.

It was only a few years after the 1971 milestone where our state’s population reached 1 million.

The milestone was celebrated with various community events, a visit from Prince Charles and quite a bit of memorabilia, which some might remember featured an abstract Swan design.

The most notable lasting memento remains a series of commemorative plaques set into the footpath along St Georges Terrace honouring notable figures from our local history, with more being added to represent years through to 1999.

Check them out next time you’re scurrying down the terrace; it’s like a WA walk of fame.

In 2004, the 175th anniversary was marked by funding for Noongar films to celebrate the first inhabitants of our city and recognise their contribution to society.

As we approach 2029 - a full 200 years of the modern Perth - my view is that it’s time to rejoice as a city that has largely made peace with its past, has emerged with a unique identity, now celebrating local flora, moving towards sustainable energy, better public transport and harmony with all cultures.

We’ve embraced the Swan River with Elizabeth Quay and have begun the process to link Perth with Northbridge, even if it is taking longer than first planned, with the Perth City Deal moving ECU to the city centre at Yagan Square by 2025 well on its way.

The east end has been reborn with Optus Stadium, and the new botanical landscaped gardens surrounding it and a new link with the iconic Matagarup Bridge and soon to be opened Zipline.

We’ve also all been enjoying the modern facility of the RAC Arena for many years now.

The missing piece of the puzzle is to rejoin central Perth with West Perth, where the Mitchell Freeway carves a canyon in front of our parliament and where the grand arch of the old Pensioner Barracks now stands lonely on an island of concrete and asphalt.

Rejoining parliament to the city has a hugely symbolic significance by reconnecting the city with another of its neighbourhoods.

Not to mention it will also fix the mistakes of the past where roads and cars were king, reclaiming another part of our city for green space and meeting spaces

These spaces are what makes cities great.

Sure, Perth has Forrest Place and Yagan Square, however, these spaces aren't purpose built for civic use, for peaceful protest, for civil disobedience or for rightful protest.

We don’t need to fill this space with trinkets, with cafes, with shops or anything else.

We can create a place for exactly what it needs to be.

A place of civil action, a place to be heard.

This new space won’t just be dedicated to modern society, or just to indigenous culture, but can celebrate our state as one voice, one people.

Isn't that what true reconciliation is? When we become one?

Perth’s new famous square for the people could be called Reconciliation Square, The Peoples Place, Westralia Square; something grand, something that will last for generations.

People were crowded into the small and aging carpark in front of the parliament.

Think about the gatherings there that have taken places for climate change and black lives matter.

A carpark and valet parking area isn't befitting of a capital city, of a great people.

These causes deserve a grander space to be heard in and celebrated.

So how much will this cost?

In a parliamentary Master Plan developed by Hassell in 2010, ths cost of such an ambitious project was estimated at $100 million.

In the current COVID-19 economy, it’s fair to say that this type of cost just couldn't be worn politically or even be feasible amongst other pressing matters such as health, police, transportation, education and the like.

However, as part of a 2029 celebration, sources of funding may be possible from sources other than the state government.

The federal government could also look at contributing for such a milestone.

It’s the type of project that would be suitable for Lotterywest funding.

The City of Perth could play its part and of course, the state government.

All of a sudden, that large pie is sliced and served up by a whole range of places and that is what makes it viable.

Perth's bicentennial represents a unique opportunity; a once in a generation opportunity to do something for future generations, something outside the cycle of politics, outside the issues of the day, a project that spans the annals of time.

It’s a free kick to do something truly civic that doesn't need to be underpinned by economic return or profit; a unique opportunity that can pass muster for the expenditure from the public.

We have eight-and-a-half years left.

We can plan it, we can fund it, we can get the public onboard for this.

One only has to look at this render to imagine what’s possible.

I’ve personally shown this to people on the campaign trail and it has a universal appeal.

Future generations will thank us for the foresight, and they’ll benefit from all the societal changes and political action that can be generated for our city in such a place; a place where Perth found it’s soul and finally came together to fulfill our full potential.

The space and the time where Perth became one of the leading global cities with a lasting prosperity.

I hope you’ll join me in this grand vision, to be bold and to be proud of this place we call home, to celebrate Perth, one of the world’s favourite cities and it’s ours.

Andrew Toulalan a candidate for council in the City of Perth's upcoming election. All six candidates for council have been given the opportunity to write an opinion piece for this website. Their articles have run as they were originally written, though Business News reserves the right to edit for legal reasons.