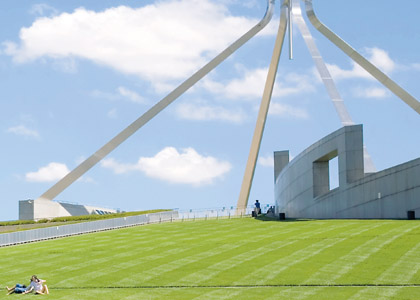 HOME RULE: Australian voters’ role in the ‘democratic’ process ends when the politicians take their places in Parliament House in Canberra. Photo: iStockphoto

FINALLY there is some good news from Canberra.

Victorian Democratic Labor Party Senator John Madigan is to introduce two bills that, if passed, would fundamentally transform Australia into a democracy, like truly democratic Switzerland.

However, all that can now be said of this historic bid is what’s stated in two numbered Senate Notice Paper items:

“1077: That the following bill be introduced: A Bill for an Act to enable the citizens of Australia to initiate the holding of a referendum in relation to altering the Constitution, and for related purposes. Citizen Initiated Referendum Bill 2013.

“1078: That the following bill be introduced: A Bill for an Act to enable the citizens of Australia to initiate the holding of a plebiscite in relation to the introduction of legislation into the Federal Parliament, and for related purposes. Citizen Initiated Legislation (Plebiscite) Bill 2013.”

Senator Madigan will introduce both this month, after which they’re likely to go to the Legal and Constitutional Committee for consideration.

Hopefully they’re assessed in an open-minded manner, since successful passage through parliament would ensure Australians finally cease being treated as powerless subjects by the nation’s legislators.

Politicians now have a monopoly grip over all stages of the legislative process, meaning they can never be democratically challenged by voters in citizen initiated referendums.

Senator Madigan’s proposals mean politicians would have to readjust to closely consult with voters and community groups or face challenges to their bills, as occurs in Switzerland, by citizen groups collecting designated numbers of petition signatures to spark referendums and/or plebiscites.

After the democratic ‘Madigan Bills’ are tabled, I’ll outline their features.

That said, it’s important to note that, unlike most ALP politicians, Senator Madigan isn’t burdened by having attended university, followed by time in managerial trade union jobs, or as a politician’s staffer, or lawyer in a Labor-oriented law firm, before being offered a safe Labor seat.

As a Democratic Labor senator he’s a traditional-style Labor man, someone in engine driver Ben Chifley’s mould; in fact he’s a longtime blacksmith who established his own workshop in rural Victoria.

Instead, the senator is a worker at the coalface, with lots of common sense, who trusts Australian voters and wants them to be fully empowered to directly decide their fate, if need be.

This is a pedigree definitely unlike that of: Julia Gillard, who headed the Australian Union of Students, then Socialist Forum and joined union-focused law firm Slater & Gordon; Bill Shorten, another union-focused lawyer at Maurice Blackburn & Co, then the AWU’s top job; and Nicola Roxon, another Maurice Blackburn lawyer who then went to Canberra, to name three of the better known.

What I outline below may surprise, perhaps even shock, some readers.

Contrary to what your parents, teachers, academic instructors, the media, and politicians, have been telling you during your childhood. Australia is not, repeat, not, a democracy.

Like all Westminster-styled nations and most republics, we’re more accurately described as a ballotocracy, meaning voters only ever get to elect candidates to legislatures, after which these elected individuals have monopoly control over the entire legislative process.

After each election, therefore, voters are denied further democratic input in the adoption, passage and amendment of legislation. In other words, voters are locked out.

Politicians under ballotocracy are assured monopoly control over what’s to become law - no ifs or buts.

You can scream, demonstrate, chew carpet in the corner of your lounge room, there’s nothing you or I as voters can do about it ... because we’re a ballotocracy.

Australians have absolutely no right to democratically change what becomes the law of their land.

It’s as simple as that.

In ballotocracies it’s politicians who rule, not the people.

Voters are barred from having a voting say, by way of citizen-initiated referendums or plebiscites, as Senator Madigan proposes.

Switzerland and about half the states of the US differ.

Their citizens have a constitutional right to either block contentious legislation or move to initiate bills from outside their parliaments.

In other words, in those states and Switzerland it’s the people - the demos, the electors - who are empowered to have the final say on what does or doesn’t become the law of the land at referendums if called by popularly backed petitions.

In contrast, Australia has a very greedy and elitist power arrangement.

Why shouldn’t Australians, who, after all, own this country, have direct input into how they’re governed?

Senator Madigan’s bills set about reversing this now 113-year-old undemocratic arrangement, which means he’s initiating a fundamental reshaping of how Australians will, if parliament adopts his proposals, be governed.

Finally, let’s note that he’s not the first politician to have attempted to create a democratic Australia.

The Australian Democrats made a similar bid in the early 1980s, but the power hungry reactionary senators -Liberal, National and ALP - rejected their moves.

Neither of our two major conservative parties has ever backed democracy, meaning they cherish seeing monopoly power of politicians continuing.

However, the ALP, from 1900 to 1963, had a plank in its platform advocating scrapping of ballotoc-racy, such as Senator Madigan now proposes.

But Labor never brought that plank into play when in power.

Senator Madigan’s move is thus a discomforting reminder for ALP politicians of their reneging on their once-admirable stance of embracing, if not actually implementing, true democratic practices by permitting citizen initiated referendums.

It’s also important to note Australia’s founding fathers failed to distinguish themselves during the 1890s when drawing up our balloto-cratic Constitution.

How many know that South Australia’s great democratic premier, Charles Kingston, drafted a constitution for the first constitutional convention in 1891 that included this democratic clause?

“A referendum may be demanded

“I. One-third of the total number of members of either House of the Federal Parliament: or

“II. Resolution of both Houses of any two local [State] Legislatures: or “III. Twenty thousand persons entitled to vote at the election of members to serve in the National Assembly [Senate and House of Representatives].”

Had this been accepted we’d now be another Switzerland - a democracy, not a ballotocracy.

Australia then had 3.15 million people. Today, at 22 million, referendum/plebiscite petition cut-offs at 150,000 signatures would thus be quite acceptable.

Kingston’s democracy clause so upset several key politicians at Sydney’s 1891 convention they quietly expunged it from debate during a Hawkesbury River cruise before proceedings commenced.

And nearly all politicians since have defended their monopoly power, so for the past 122 years.

But I’m not holding my breath.

Those wishing to learn more about this rarely highlighted deception can Google my 11,000-word National Observe article: